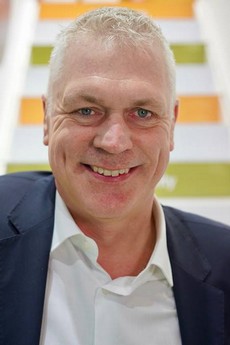 "We are sidelining ourselves as Europe, modern breeding techniques are being applied in other parts of the world anyway," says Arend Schot of Syngenta. "I assume that in the longer term this type of technologies will be allowed in Europe, but then we are already so far behind."

Arend is talking here about technologies such as CRISPR, which can be used to make precise changes to plants in order to make better new varieties. Because these types of techniques are not allowed within the European Union, breeders within Europe must look for other options to, for example, grow fast resistance to certain emerging diseases. 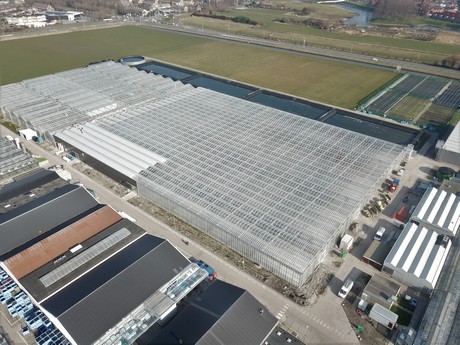 The facility uses the very latest to enable many different research studies. "The laboratory is basically a huge high-tech indoor farm, within the lab it is also possible to adjust the climate - lighting, temperature, humidity, day length -," says Arend. “We can also release insects and diseases on the plants in uniform and closed environments without the risk of contamination in other environments. All this technology makes it easier for us to find the correlation between a certain resistance and the genetic information. These genes can then be crossed in more quickly into suitable lines, so that, for example, a new cabbage variety with resistance against clubfoot can be brought on the market quickly."

According to Arend, the aim of the center is to place as many useful properties as possible in a variety, to make crosses and to speed up that process. 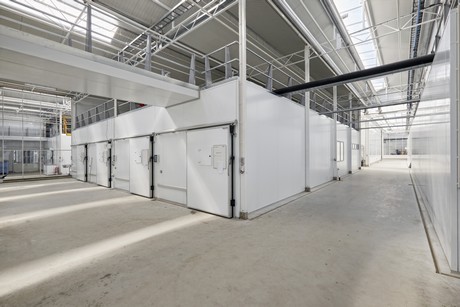 Corridor with climate cells in the technology center

Backcross Factory
The aim of the backcross factory is to cross the genes that also have been discovered in the seed technology center as quickly as possible in uniform parent lines. " Later on in the backcross factory we can do a few generations a year," says Arend. “When I left the agricultural school, it took 15 years to bring a variety to the market. Now, with this backcross factory, a process of 15 years will be reduced to a year or 2 to10, the crossing of the genes in the parent lines is accelerated by a factor of 2, which normally took 6 years but has now been reduced to 3 years in the backcross factory. That in combination with the seed technology center ensures that you can cross many new properties in a plant in a very short period of time.” 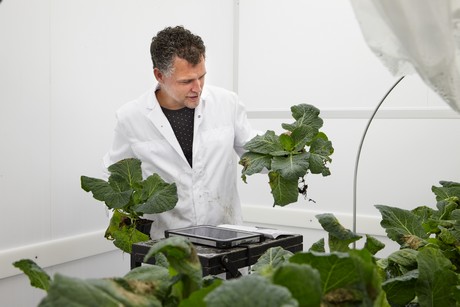 Durability
These new facilities, the seed technology center and the backcross factory, are for Syngenta steps towards sustainability. "We do want to take responsibility and offer sustainable solutions that are becoming increasingly complex, this new center fits in perfectly with that," says Arend. "Whatever technologies we use as a company - whether that is crop protection, breeding, or data - the objective is sustainable."

Sustainability for business is a strong focus for Syngenta in these new facilities. "We look which genes can best be introduced for long-term sustainability," says Arend. “We are searching for ways to reduce food wastage by looking at whether it is possible to ensure that less production is lost during cultivation and to ensure a better shelf life of crops. We also intend to look at how certain varieties and crops deal with climate change. Consider, for example, heat-tolerant iceberg lettuce and white cabbage that can withstand dry conditions well. And what about reduced input of fertilizers and nevertheless have a better growing crop." 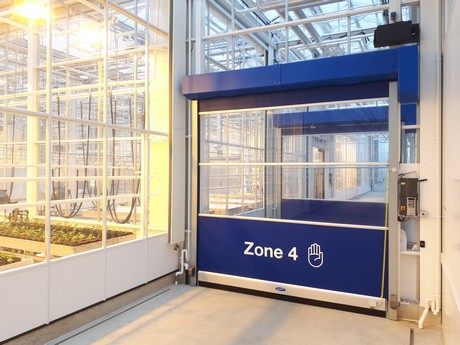 Lock between 2 zones in the technology center

In addition to breeding crops to reduce wastage in general, Syngenta is of course also busy with diseases that are emerging. "It is also important for us to increase the resistance of plants, because the disease pressure is increasing," says Arend. “For example, look at the rise of ToBRFV, or other diseases in the cucurbits and the bell pepper. The great thing about these new facilities is that once we have that resistance, we can easily introduce them into our portfolio.”

Labor
According to Arend, Syngenta is also searching to breed products to reduce labor requirements. "If we talk about scarcity of input, labor is perhaps the largest and most expensive for growers," he says. "The solution for this is of course not an unrestrained hiring of people cheaply, but there needs to be partly automation." 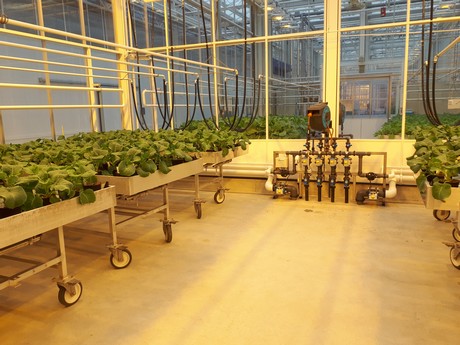 Disease test on tables in the greenhouse in the technology center

He goes on to say: “We are very much looking at the possibilities for automation for outside crops. For example, a mechanical harvesting of sprouts or cauliflower that remains white even in the sun and therefore does not have to be covered. This saves a lot of working hours. Besides, these solutions can already be seen on our Fields of Innovations.

We are not yet that far for fruit crops. That will still take a while. We may come to a solution with genetics in combination with robotics, for example, by growing a pepper that is less fragile so that a robot may possibly be able to harvest it more easily without breaking the plant. So it is still difficult to define what is needed based on plant type, and what kind of technology is going to appear. This is a question that must be worked out in the coming ten years."

Arend also indicates that if the labor demand is resolved better, the issue of location will also be less of a problem. "Then even the Netherlands would become a great place to grow a number of crops," he says. “After all, the Netherlands is a good place for trading in fresh produce, but labor is very expensive. That is why we also realize the new facilities here, short contacts throughout the entire chain. Take Fruit Logistica as an example: there clearly was a lot of Dutch influence. In addition, there is support from the government for this sector, and also from science with Wageningen.”

Syngenta is also looking for a different way to help their customers make products that fit in well with the market. "We are also engaged in building digital and farm management," says Arend. However, plant protection products still remain important at Syngenta.

Indoor
According to Arend, the growing market for indoor cultivation is an important opportunity, but not one that specifically requires a lot of attention from breeders. "Worldwide, more and more is being grown indoors because growers want to be able to control the climate and want more control over the health of the crop," he says. “These huge investments ensure that large segments of the market become increasingly uniform. So we see that varieties that we develop for a certain area are also used in other areas. So we do not specifically breed varieties for indoor, we are more reactive in that.” 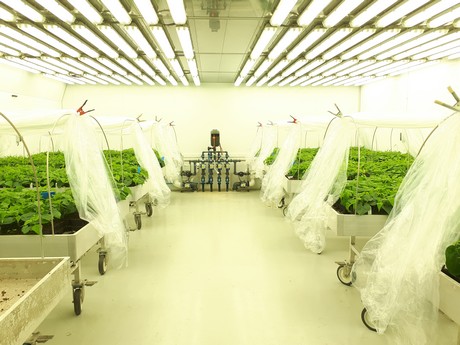 Dutch pride
The Netherlands is a leading factor in horticulture worldwide, and Arend believes that we should be proud of that. "I am very proud, not only of Syngenta, but I am also proud of Enza, Rijk Zwaan and Bejo," he says. “They are all beautiful companies that people enjoy working for. The world still looks to Enkhuizen for developments within the sector. Of course we compete, but in the end, we are together engaged in the race in technology to help customers. The Netherlands can be proud of this."

Technical details
The seed technology center has been built as a greenhouse, but is divided into different cultivation departments where the glass of the roof is not even glass. "These departments have labor-technically been kept as easy as possible," says Arend. "It must be impossible for cross-contamination to take place in the different zones, and it must be possible to properly disinfect, so that you can grow donor plants as cleanly as possible."

This stable and uniform environment naturally brings along with it possibilities. "We can work all year round, because we can always provide the same climate," says Arend. "This also means that the results are completely uniform and that consistency is important for this type of research."

Automation is also an important step in speeding up the process. "Everything within the research centers is automated, including irrigation and fertilization with all conceivable substances," says Arend. "Everything is also done with mobile tables, making it easier to move things around, but also the work in general and disinfection becomes easier."