Rain has damaged over 200 hectares of greenhouses in Spain. Mainly in the region of Níjar the damage is said to be of historical size. Among the damaged crops are tomatoes, cucumbers, eggplants and zucchini. Since the damage is very regional, for example the pepper crops of El Ejido have been untouched. 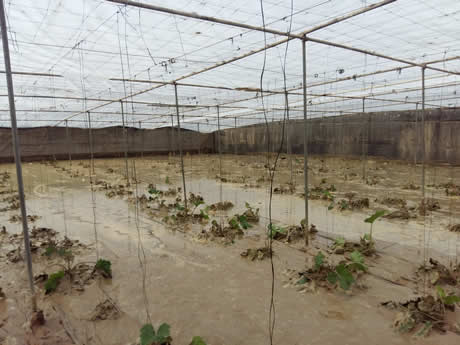 The images of the severe weather that has been battering the east coast of Spain and the Balearic islands do not lie. Streets have been transformed into raging rivers, and countless cars have been washed away. There have been rescues and damage to buildings. Many drainage systems have overflowed, and the water is dragging everything along in its wake. The severe weather is expected to continue today.

According to Spanish organizations the worst damage is done to the leafy vegetables, with nearly total losses in Murcia/Alicante. "Everything that already was planted is most likely destroyed, so it will have to be planted again. Taking into account that Murcia is the main leafy vegetable grower in Spain, this means that the Spanish season will be significantly delayed and there could be shortages or a gap between the Northern European season and the Spanish one", they say.

Also the young horticultural crops are hit severely. In the east of Almeria, the region of Níjar, it looks particularly devastating. Greenhouses have been demolished, and roads are have disappeared due to the weather and the heavy rainfall. 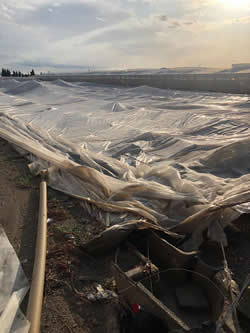 Even for the greenhouses that are still standing, the results are unclear. "For the main cucumber crop, harvest has just started. It will depend if there's root damage due to the cold water to see how the crop will survive. Tomatoes have been planted in the last four weeks mainly, and the crop that's a month old by now will probably survive more strongly, but the young plants are destroyed."

The damage is caused by heavy rainfall: with the rain coming from the mountains, a way to the sea has to be found. Artificial rivers to support the water went outside these paths, leaving mud everywhere and causing severe damage to many companies in its way. "It really depends on where the water falls. El Ejido for example has not been hit at all, even though it's not that far away."

This morning the rain has stopped, and growers are looking to see the damage on their crop and infrastructure.

The total acreage of greenhouses in Spain is over 30,000 hectares, with Murcia and Almeria being very important regions. A great part of the acreage consists of foil greenhouses.

Andrés Góngora with Almeria growers organization COAG says the organization is in touch with the government and the minister of agriculture regarding support for the industry. The organization itself opens up their offices to help growers wherever possible - whether they're a member of their organization or not. He says the storm is of historical size. "It's a blow to the sector, the province and the Andalusian economy. Greenhouses are devastated and many crops are under water."

Proexport's Director, Fernando Gómez, has asked growers not to abandon their farms. They should also avoid dangerous situations. He says it is too early to assess the damage to crops and fruit and vegetable companies. The rain has not yet stopped, making it difficult to gain access to certain areas.

"No doubt, the damage will be immense. Vegetables such as lettuce, spinach, and celery have already been planted. These will, more than likely, have to be replanted. This replanting will delay the season until November."

In social media he shows a video of the overflooding of the Rambla del Albujón in La Puebla (Cartagena). "This video is from the point where it coincides with the Tajo-Segura. Maintain caution and do not approach the channels", he writes with it.

Everything under water
A grower from Murcia has said many crops have been destroyed. "Everything is under water. This is the first time we have seen this happen."

The effects of the floods in the region are still far from clear. "Everything is flooded; I have never experienced anything like this," says a local supplier. He adds that the situation now appears to be worsening. The total size of the devastation is not yet known. "The amount of damage will only become clear once the storm is over."

Tornado's
Yesterday, warnings about wind gusts and damage to building were issued. This seems to, indeed, be the case. The town of Vicar lies between Almeria and El Ejido. There, the wind damaged numerous greenhouses. It is mainly the more northern regions that are getting the worst of the floods. A record amount of rain has fallen in Ontinyent, south of Valencia.

From Alicante, Thomas Bos of Thomasol reports that things have been quiet up to now. Today is the last Code Red day. Schools and universities are still closed. "The streets are very quiet. Here in Alicante, no one is out and about. However, 30 km from here, the Orihuela area in Murcia has been hit very hard."

"The Code Red applies to Almeria today too. The airport is one of the places that is closed. We will have to wait and see how today turns out. There is talk of very turbulent weather. However, the largest risks are very localized."

"The areas around Orihuela, Beniel, and El Raal have been walloped. Those are mostly citrus-growing areas, supplemented by mandarins and oranges. The storm will also have a negative effect on the broccoli. There was a lot of damage in Pulpi on Thursday night. The storm affected mostly the iceberg lettuce cultivation. Not everything has been planted yet. But it is a problem for the plants standing under water," he says.

Fruit
Early mandarin varieties will be damaged by the heavy rains and high winds. The citrus exporters from Alicante and Murcia planned to start their campaigns within 10 days, but that won’t be possible, as that means they should start harvesting the earliest varieties and the fields are flooded.

The consequences of these extreme weather conditions might also be felt in the citrus and kaki seasons. These seasons are on the verge of beginning. Harvesting will only start in a few weeks. So, the fruit still has time to grow a little. However, so much water in the orchards increases the chance of fungal infections. The strong wind gusts may also have blown some of the fruit out of the trees.

So far, estimates for both sectors have been good. The citrus sector in the Valencia region expects a drop of 30% in the harvest. However, the fruit is of good quality and a reasonable size. Kaki growers are expecting a normal crop. Last year, 60% of the harvest was lost. This loss was due to frost and hail.

Denia Alicante
A tornado swept through the town of Denia in Alicante. It destroyed the local sports center. The Clariano river in Ontinyent (Valencia) burst its banks, and there were torrential downpours in Alicante. Tunnels on Ibiza are closed, and a 16th-century bridge washed away in Aielo de Malferit in Valencia. Two deaths and at least three injuries have been reported so far, with countless rescues and even more evacuations. This is not even taking the enormous amount of damage into account.

On Thursday, the Beniarrés district of Alicante recorded the highest rainfall in the Valencia region. There, in just 24 hours, a total of 359 liters of rain fell. In the same timeframe, the town of Ontinyent had to deal with 259,2 liters and Muro d'Alcoi with 214,2 liters.

About 500 people from various areas of Murcia had to be evacuated this morning. This Spanish hurricane has been christened Dana. This storm claimed a third victim when a man in Almeria was unable to escape his locked car.