Tomatoes are the world’s most-grown vegetable for the food processing industry. Farmers in many countries use polyethylene (PE) mulch films to increase the tomato yield by controlling weeds, soil temperature and water usage. Thin PE mulch films must be removed from soil after harvest. As it is often impossible to collect the films completely, PE film residues find their way into the soil and accumulate there, since they cannot be biodegraded by micro-organisms. 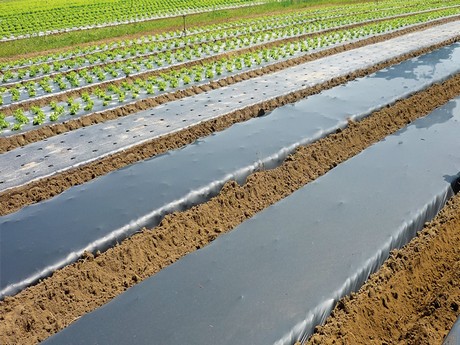 With ecovio M 2351, BASF offers a certified soil-biodegradable plastic for mulch films consisting of the biodegradable co-polyester polybutylene adipate terephthalate (PBAT) ecoflex and other biodegradable polymers made from renewable raw materials. Mulch films made of ecovio M 2351 can be ploughed into the soil after mechanical harvest as naturally occurring micro-organisms in the soil recognize the structure of the film as food they can metabolize.

Moreover, mulch films made of ecovio can lead to an increased tomato yield from 15 to 50 percent, less water consumption and a better weed control with less herbicides compared to bare-soil farming. Farmers also observed higher resistance of the crop to fungal diseases, an earlier harvest time as well as a better, more homogeneous quality of the crop and a higher Brix index, which refers to the sugar-water ratio in the tomatoes. Thus sustainable agriculture can be combined with efficient food production with higher yields and high-quality produce. 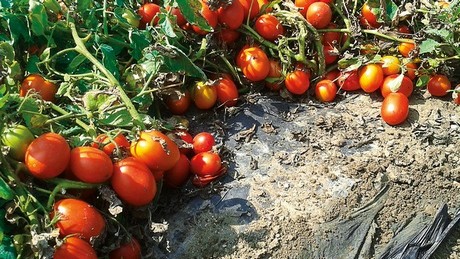 Sustainable agriculture: tried and tested in everyday farm work
Rather than being labor-intensively removed and recycled, films made from ecovio M 2351 can be left in the soil after harvesting, which saves labor and costs. A study from ETH Zürich, Switzerland, has shown that soil microbes such as bacteria and fungi can use films made from the plastic PBAT as food. The microorganisms take the carbon from the polymer both to generate energy and to form biomass. The remaining end products after biodegradation are CO2, water and biomass. This means that PBAT biologically degrades in the soil and does not remain there as microplastic as PE does.

Soil-biodegradable mulch films contribute to a better root development, better plant growth and improved soil quality. Ecovio M 2351 has been the first material to be certified as soil-biodegradable according to the European standard DIN EN 17033. The use of mulch film made of ecovio is also accepted for organic crops in many countries.

Farmers have been using certified soil-biodegradable mulch films made of ecovio for more than six years since its introduction to the market in 2012. “We support farmers in many countries in using mulch films made of ecovio,” says Dirk Staerke from Marketing Biopolymers for Agriculture at BASF. “According to the Food and Agriculture Organization of the United Nations, the global agricultural production has to grow by 70 percent if we want to feed a world population which in 2050 is expected to grow to nine billion people. Bio-degradable mulch films can help contribute to this challenge.”

Benefits also for film manufacturers
Ecovio M 2351 is a ready-made compound for extrusion of thin films. It can easily be processed on conventional blown-film lines for PE. Because of its excellent mechanical properties regarding strength and tear resistance, these films can be manufactured in different thicknesses of 12, 10 and 8 µm. The compound already contains slip and anti-block agents.