"Compared to last year, I have much less problems with mildew"

After becoming infected with the cucumber mosaic virus for three years in a row, cucumber grower Edwin Hendrickx has been free from the virus that caused him quite a bit of headache for one and a half years. Reason for him to take a new step on the way towards optimum cultivation. A stronger crop, that's where he wants to go.

In the search for a variety that was more resistant to the cucumber mosaic virus, Edwin found a variety that is more sensitive to mildew. “Last year it also went completely wrong in my greenhouse in July, but this year my crop is in a much better condition. Colleagues have told me that they are completely covered with mildew at the moment." 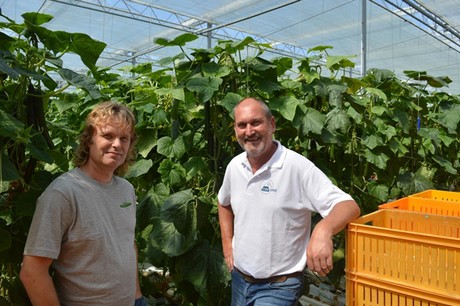 Edwin Hendrickx and Gerard Schepers in the 2.4 hectares greenhouse where Edwin traditionally grows with intermediate plants.

Details on the label
To do something against mildew without the use of chemicals, Edwin came across the plant enhancer Sinergy Defense, which this year was introduced by Cindro. It is a combination of three products, each with substances (salicylic acid, orthosilicon acid and amino acids) that help the plant to activate the plant's own immune system. "Together these substances form a powerful combination, hence the name," according to Gerard Schepers from Cindro that, in addition to plant enhancers, also produces the silver-stabilized hydrogen peroxide Oxyl-PRO S. “Salicylic acid inhibits the growth of harmful microorganisms and promotes the production of antimicrobials. The other two substances activate and increase the effectiveness of the salicylic acid."

In recent years, in response to growers' demand for resilient cultivation, many products have entered the market. That makes it not easy for growers to choose, Gerard realizes. “Read the label, that's my advice. Only then you know what is in a product, because that varies considerably from product to product."

But actually the grower is still not quite there. “What is missing is a label with percentages of the used substances on it. As far as I'm concerned, they make that mandatory. A more detailed label could help growers to make their choice. Sinergy Defense products are very pure and highly concentrated."

Click here for an enlargement of the image and more details about the composition and dosage per hectare in Dutch.

42% mildew reduction
Edwin decided, after the consultation with Gerard, who explained to him about the composition and the effect of the product, to go for it fully. "I first trickled Sinergy Defense into the irrigation water once a week, but now I add it as fertilizer to the water that my fog system (LVM) spreads in the greenhouse," says Edwin.

What he sees in his greenhouse is a stronger and more vital crop. “The leaf is harder and has a nice shine. The mildew that still comes is very easy to control, much better than previous years. And unlike other agents with salicylic and /or orthosilicic acid, the fruits do not get a greasy haze."

Gerard Schepers, adviser of Cindro, would have preferred to see that Edwin had not treated part of his greenhouse. “Then we could have seen differences. Fortunately, we can compare with other growers, and also with other crops. There too we see a more resilient crop with a positive effect against mildew and other pathogens. In previous tests, that already showed up. Compared to the reference product against mildew, a reduction of up to 42% in mildew was achieved."