“The veggies are in the supermarket shelf the next day already”

Holland Rail Terminal: from Bleiswijk to Berlin by train

From Bleiswijk, in the Netherlands, to Berlin by train. If preparations and construction go well, the first Ro-Ro train will depart in 2024. The new, still to be built, train connection is an initiative of not only governments but industry organizations as well.

It is also the idea of, especially, business people, including Mark Remie. He is the Managing Director of FFWD Rail in Rotterdam. The project is called the Holland Rail Terminal Lansingerland. Governments, carriers, and shippers are collaborating on this project. 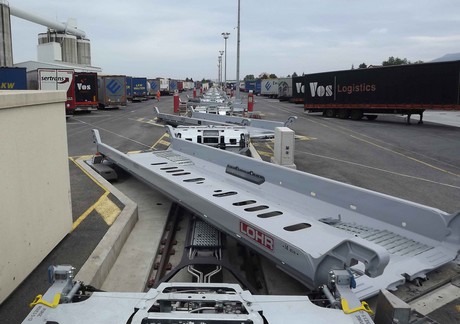 Before that happens, a brand new rail terminal is to be built in Bleiswijk in the Dutch town of Lansingerland. “Soon the trucks from Greenport West-Holland will come to this terminal,” says Ruud Egas, the project planner.

"Here, standard trailers, such as refrigerated trailers, will be driven onto a special trailer flatcar. Our goal is to load the entire train with 42 trailers within an hour. This is possible thanks to a unique Ro-Ro method we will be using. We do not have to hoist the trainers onto the flatcars. We drive them on." 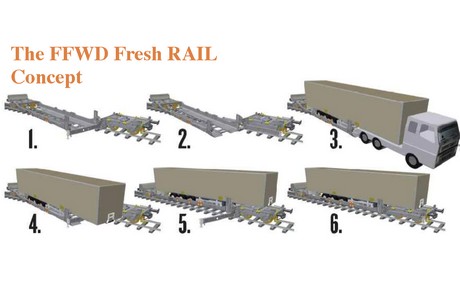 How the Ro-Ro system works with the flatcars.

Queues and sustainability
There are several important reasons to get this project off the ground. "We have to deal with congestion on European roads. There is also an increasingly, acute shortage of drivers. Sustainability plays a major role too. A modal shift from road to rail transport is an easy way to realize a reduction in carbon emissions," Ruud says.

"With this method, we remove 42 trucks per trip from the roads. We, of course, have electric locomotives. However, in 2023 we want to equip the wagons with a special fitting. We want to be able to connect the cooling of the refrigerated trailers to the locomotives' electrical network."

"In this way, we not only switch to a different modality. We will also use another kind of fuel. There will soon be 42 refrigerated trailers on the train. We can connect them to the locomotive's electricity. Among other things, this further reduces CO2 emissions," explains the project planner.

A refrigerated trailer, driven onto the flatcar.

Speed and reliability
Two things are of great importance to the fruit and vegetable sector when it comes to rail transport. The speed of transportation and its reliability. "We are not focused on the use of containers. Rather, we are focused, in particular, on using trailers. So, we can load and offload quickly," says Ruud.

"Rail transport is also well organized, especially in Germany. The connection is fast too. With this rail link, cucumbers can be in supermarkets in Berlin the next day already. We must be able to guarantee our transport in the future when it comes to reliability. Here, the government plays a major role." 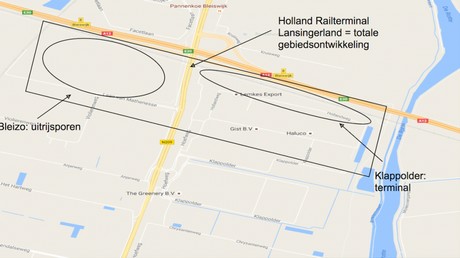 The location of the yet-to-be-built rail terminal in Lansingerland.

The rail terminal is to be constructed next to the A12 highway in Bleiswijk. From here, goods must be transported to various destinations. These include Konigs Wusterhausen, a town in Germany, near Berlin. There are more and more plans for building terminals and rail links throughout Europe.

"The Dutch government should focus more on the railways as a modality. This must be done to tackle the road congestion in the Netherlands," Ruud concludes.