The Canadian Produce Marketing Association (CPMA) said it is proud to honour its 2019 Produce Champion: Member of Parliament Wayne Easter. CPMA’s annual Produce Champion award is given to one or more Member(s) of Parliament and/or Senator(s) who have been supportive of the produce industry and effective at bringing industry issues to the forefront on Parliament Hill.

The Honourable Wayne Easter, CPMA’s 2019 Produce Champion, received his award at a celebration hosted by CPMA in his home riding of Malpeque, Prince Edward Island. The event featured live culinary demonstrations by CPMA Half Your Plate Ambassador Chef Michael Smith.

“MP Wayne Easter has shown a passion for a safe and thriving produce industry in Canada which aligns clearly with our vision,” said CPMA President Ron Lemaire. “He has demonstrated exemplary leadership as a Member of Parliament and Chair of the House Standing Committee on Finance, benefiting our sector and the lives of all Canadians.” 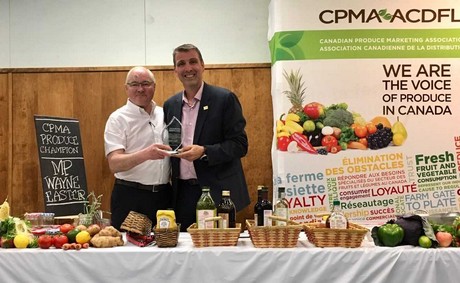 “It is an honour and privilege having been chosen as the Produce Champion this year by the Canadian Produce Marketing Association. Having farmed, and serving farmers in various capacities in the farm movement, I can attest that - from coast to coast - Canadian farmers and producers grow the best quality fruits and vegetables in the world that we get to enjoy,” said MP Easter. “Our agricultural sector consistently meets the highest standards anywhere, ensuring we have nutritious food in abundance, and we have the CPMA to make sure it gets from the farm gate to the dinner plate in an efficient and effective manner. Thank you for this award and the opportunity to highlight the work of our producers in Canada.”

The Produce Champion award was inaugurated in 2018 and was awarded to Members of Parliament Pat Finnigan, Ruth Ellen Brosseau and Bev Shipley.

CPMA said it congratulates MP Easter and looks forward to continuing development of the produce industry, working with him and his fellow MPs, Senators and all parliamentarians.