Ocean Mist® Farms said it has recorded a significant increase in artichoke sales through its retail displays and promotions in partnership with Four Seasons Produce. In June, Four Seasons Produce worked directly with Lexington Co-op Markets in Buffalo, NY to move thousands of artichokes in just five days, the company said.

Lexington Co-op Markets held “The Great Artichoke Adventure” in June during an optimal time for artichoke promotions. Between two of its stores, the company sold 3,209 artichokes from Wednesday to Sunday and hosted live demonstrations and tastings. In addition to a few house recipes, the stores made and packaged Ocean Mist Farms’ Artichoke Butter, which sold 11 lbs.

“Our stores saw tremendous success from this promotion! We gave people the opportunity to experience all that fresh artichokes bring to the summer table,” said Caitlin LoVullo, fresh category manager for Lexington Co-op Markets. “For those who wanted to go home and recreate recipes that they had seen, we had plenty of fresh artichokes for them; but for those who wanted a quick way to enjoy Ocean Mist Farms artichokes, we also had several fresh prepared items for them to purchase.” 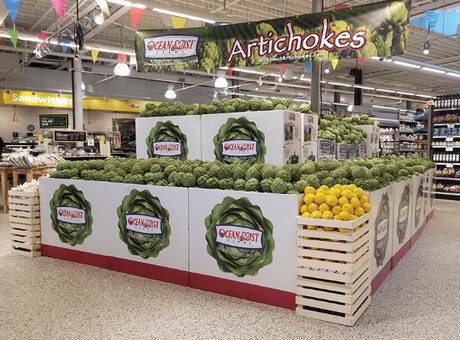 In February, Four Seasons Produce also promoted Ocean Mist Farms Frost Kissed Artichokes, which are only available during the winter months and with limited supply.

“Our partnerships are very important to us and we want to be a resource between our fresh produce suppliers and the retailers,” said Brian Dey, senior merchandiser at Four Seasons Produce. “Producing top-quality in-store experiences like the one Lexington Co-op Markets did in June is a shining example of how strategic merchandising can move product efficiently.”

“We’re grateful for partners like Four Seasons Produce who take initiative to find creative ways to elevate our brand at the retail level,” said Diana McClean, senior director of marketing at Ocean Mist Farms. “It’s incredible to see the success that stores like Lexington Co-op Markets have when they utilize their expertise in artichoke merchandising and sampling.”