Growing on the Sunshine Coast: a peek into Nora Valley's expansion Bunya Fresh

Growing on the Sunshine Coast - doesn't that sound like a dream? To the team with Nora Valley Greenhouse it has been a reality since 2005. The Australian business has grown to over 6 hectares. And the story continues. With their snack tomatoes being in high demand, currently another greenhouse is being built at a second location nearby.

Snacking tomatoes
The story of Nora Valley started in 2005, when Mark Hopgood and Julian Long built their first 2.2 hectare greenhouse on the Sunshine Coast, Queensland (Australia). Nearly a decade later the acreage was doubled.

Nora Valley has been growing Perino (Angelle) for Costas for ten years and they sell exclusively to Coles. "The story of Perino in Australia has been a good one. The product has exceptional flavour and incredible shelf life. Over the years Perino has built up a loyal consumer base who will always buy Perino being confident of consistent quality and the best tasting snacking tomatoes." 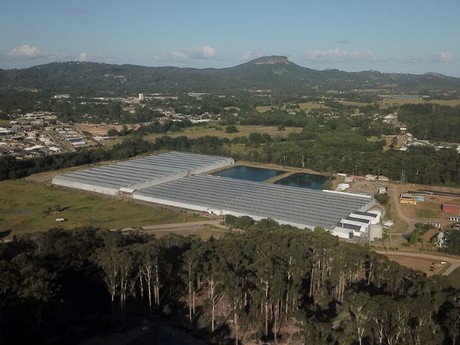 When approached by Tomato Exchange - the tomato division of Costas - to increase Perino production, Julian didn't hesitate. With Mark Hopgood residing in Zimbabwe, and having a successful horticultural and tobacco growing business there, it has been the Long family that has been growing with the Nora Valley business in Australia. Julian's sons Sean and Ryan have worked in the Nora Valley project since 2005 and also his daughter Storm has become involved in the family business. "This was also an opportunity for us to start a horticultural business for the family independent of Nora Valley. We named this business Jongwe Pty Ltd trading as Bunya Fresh."

Bunya Fresh will be growing Syngenta Perino (Angelle), the same variety that is grown at Nora Valley. "Because they are contracted growers to Tomato Exchange, the marketing of Perino is entirely up to Costas. We do not foresee Perino being sold to any other outlet."

Expansion
With no room on the existing property, Julian located and secured a property at a ten minute drive from Nora Valley. The two properties are close enough to allow for management, staff and equipment to be utilised efficiently, making it economically beneficial to both businesses. According to Julian, the property was a vacant block of land with no infrastructure at all but ideally suited to building a greenhouse - and that's exactly what's been done.

The new generation is ready to grow!

Growing under plastic
From the start of Nora Valley back in 2005, Richel plastic greenhouses have been used. Back then, the cost of glass greenhouses, being substantially more than glass, was the motivation. Also, diffused glass wasn't available at the time, and growing under diffused plastic was a big advantage.

"Now that diffused glass is cheaper, a glass greenhouse could be an option but we are comfortable sticking with what we know", says Julian. "Both Mark and I had been growing crops under plastic in Zimbabwe and were familiar with it. Plastic greenhouses, particularly the Richel design allows for condensation to run down the full length of the plastic into condensation gutters with very little dropping onto the crop."

Water
With an annual rainfall of 1,700 millimeters for the Sunshine Coast, facilities to collect all the rain from the greenhouse structure and good storage capacity, water generally is not a problem. All water on both projects is UV treated and all drain water is recycled.

"From experience it is always wise to have a back up source of water, and before we purchased the property we drilled several bores to ensure there would be sufficient water for when there are extended periods with no rain", says Julian. "The Bunya Fresh project has a lined dam with a capacity of 66 megalitres which is half full leading up to planting." 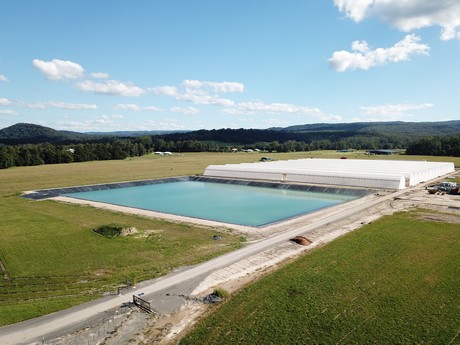 Climate conditions
Both Nora Valley and Bunya Fresh are about 16 kilometres from the coast and therefore they do not get the extremes in weather as there would be further inland. However, one problem they have to deal with is high humidity levels in summer. "The months of December, January and February are very difficult months to produce tomatoes, especially when growing truss. Perino being a small grape tomato is more tolerant to the conditions in these warm humid months where the 24 hour temperatures can be as high as 25 C", says Julian.

Because supermarkets demand consistent quality all year, they have found they can complement the supply of Perino by being "winter" growers. "We have light levels in winter sufficient to achieve acceptable yields without artificial lighting which growers to the states south of us find hard to do. We have mild winters also which means our heating costs are much lower than our southern state growers. We aim to plant in the hot, humid January period which young plants are able to cope with the heat and humidity better than older plants with long stems."

When the crop begins production 5 - 6 weeks later, they are entering the cooler autumn months so growing conditions are good until they top the plants in the last weeks of November and commence pullout between Christmas and New Year.

Thermal screens and climate control
In the facility thermal screens are being used, to reduce heating costs in winter. "We have prioritised them over shade screens because shade screens would only be useful for a very short period", Julian explains. "We have found that when it does get hot in spring and autumn the wind is invariably from the west which is dry and the fogging can then reduce temperatures. Onshore wind from the sea is humid but mostly milder temperatures."

In both projects CO2 from the boiler will be used and both projects are equipped with buffer tanks. "Because we heat for only 6 months of the year and gas consumption is much lower than for growers in cooler climates, we do not capture enough CO2 from the burner and have to supplement the climate with liquid CO2 which we do until vents have to be more than 35 - 40% open. "

Both projects are equipped with HAF fans. At Bunya Fresh even twice the recommended number of fans have been installed. And there's more going on there. "We also install them under the gutters as opposed to above the crop. We find this provides a much more efficient way of producing air movement in the climate, necessary for the high humidity levels at the beginning and end of the crop."

Labour and automation
Another challenge in the AU market is labour. It is by far the biggest cost of the farm. "Labour in Australia is very expensive and like all Western countries it is hard to find workers to do this kind of work", Julian says. The government recognised this some years ago and has a system in place where people from Pacific Islands can get a 6 or 9 month visa to work in Australia. They then have to return home for 6 - 9 months and come back after that. "We have two teams trained which change over every 6 months which works well."

"They have to be paid the same wages that are regulated for Australians. Because Pacific Islands are much poorer than Australia this scheme benefits their communities and countries greatly. We have used this scheme for eight years now and it works well."

According to Julian, labour is the only place they can significantly reduce costs of production. Therefore they continually work on systems to make workers more efficient, also technology. Currently a machine is being installed that will grade all the fruit before packing. "This will hopefully reduce our labour costs by 6 - 8% because pickers will no longer have to grade out reject fruit while picking and the final inspection on the grading belt will no longer be required." 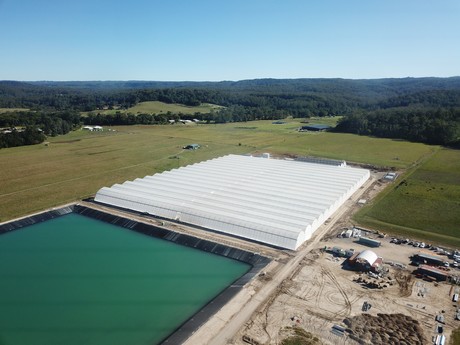 Family project
As said, Bunya Fresh is a family run business. Sean, who worked for New Zealand packing line manufacturer BBC is able to maintain the punnet packing lines. Being very good with his hands and very knowledgeable in terms of repairs to the structure, replacing plastic, irrigation equipment and all other equipment both mechanical and electrical, he's able to keep everything functioning correctly. On top of that he's researched a lot and has designed and manufactured many labour saving devices. Thanks to his experience with stages 1 and 2 of Nora Valley, he's managing the Bunya Fresh project as well - something that of course is quite a stressfull time.

Then there's Ryan, the grower at Nora Valley, who will oversee the growing at Bunya Fresh. Being an exceptional grower with a natural ability to understand the many facets of snacking tomato production, he will also train a new grower.

The team is completed with Storm, who trained as an interior designer but over the years have become involved in the administration side of Nora Valley. She will take on this very important role at Bunya Fresh. "Administration of a horticultural business needs a special skill set and Storm now has these", says Julian.

Then there's the extended family. "When Nora Valley commenced truss tomato production in 2006 we engaged Toon Oomen, a retired Dutch tomato grower as a consultant. Toon and his wife Adrie came to Australia for two weeks twice at critical stages of the first crop to advise and assist us in the new venture, an immense task for both of them as we were very new to this industry", Julian recalls.

Thereafter they would have weekly Skype contact with Toon to discuss issues from growing to labour saving techniques to maintenance of structure and equipment. "We all owe Toon and Adrie and huge debt of gratitude. Toon would fly out to Australia three times a year and spend three to five days with us consulting, over the years Toon also built up a customer base of other growers he would consult for, in both Australia and New Zealand." 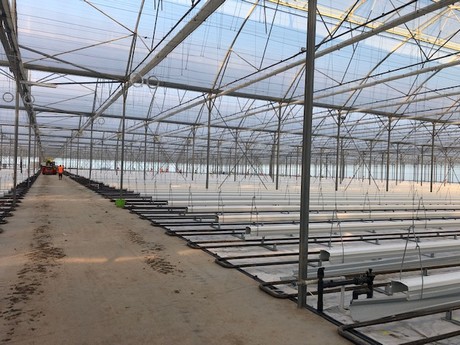 Planting coming up
The new greenhouse is all ready to grow and plants are expected in the next week. And there's more coming up: in July the PCA Conference will take place. Those interested in visiting the farm are welcome to join the bus tour on July 10th 2019, which is to make a stop at Nora Valley / Bunya Fresh. Click here for more information on the tour.