Building a greenhouse and connecting it to gas and electricity in some regions is more challenging than in others. While in the Netherlands and elsewhere in Europe an extensive infrastructure is available, in the Middle East and North Africa that is often not the case. But there they do have a lot of hours of sunshine and that – with some smart technology – could be the solution. 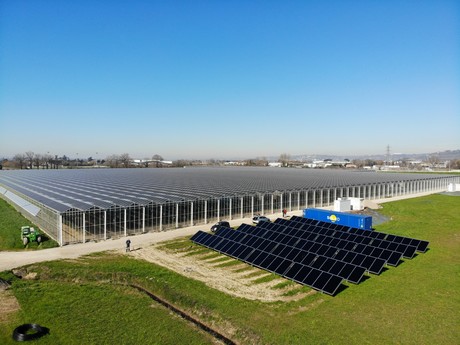 Proof of concept
Adriano Desideri and his team of SOLHO – short for Solar Horticulture – worked for several years on storing solar energy and transforming it to electricity. Then in 2016 they discovered there was a demand for such renewable solutions in the horticultural sector. They introduced themselves to Van der Hoeven and three years later they made their ideas into reality with a proof of concept at a greenhouse in France. The system is called SPRHOUT (Solar Powered Off-grid Horticultural UniT). “Now we can show that it actually works”, Adriano says. “The fact that the greenhouse is used for cultivation of kiwi plants is not crucial, our system will work for any type of greenhouse with any type of cultivation. Whether it is vegetables or flowers.” 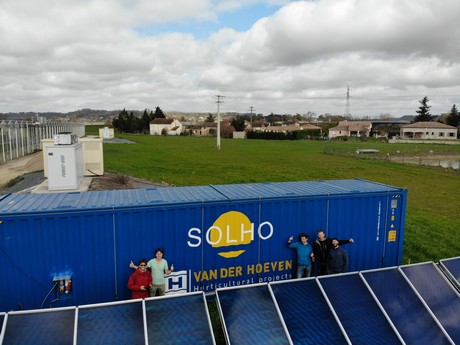 Solution for lack of infrastructure
“We can open a new market for greenhouse manufacturers. The availability of gas and electricity is crucial for the decision to place a new greenhouse or not. If we had our way, horticultural projects can be deployed anywhere and won’t be cancelled anymore because of lack of infrastructure.” According to Adriano there is a high potential for this off-grid energy system in the sun belt regions. “In these regions there is a rising demand for high-tech greenhouses to cultivate food for the local market. Also keep in mind the water shortage: changing to protected cultivation instead of open field growing, will save a lot of water and vegetables can be grown of higher quality.”

But how does it work? “With solar collectors we transform the sun into thermal energy, then we store it in a thermal energy storage. Next we convert that into electricity using a thermal conversion engine. The thermal energy can also be used directly to heating or cooling the greenhouse if needed.”

With the technology being proved at the test case in France, now it is time to take the next step. “Although everything is at an early stage, we are looking with Van der Hoeven at a few commercial projects.”