North American supplies of asparagus are beginning to transition out of California.

“The California supply of asparagus finished up at the end of last week,” said Craig Rolandelli of San Ramon, Ca.-based JMB, who notes that it's the Central Valley and Delta regions wrapping up. “The quality is still very good but it’s just at the end of the season.” He adds that the industry had good retail support of California asparagus and look forward to more retailers getting on board with local product next year in California.

Outside California, coming into production are regions such as Baja and Obregón, Mexico as well as Guanajuato, Mexico. “The Central Mexico program, which just started coming last week through Texas, will ramp up by the end of the month. There’s a lot of volume that comes out of that area in June, July and August,” says Rolandelli.

The Central Mexican region in fact is starting earlier this year than normal. “Our biggest grower down there started in early May. They’re trying to hit a better market here in May and then back off in June-July when the markets aren’t as good,” says Rolandelli. “They’re trying to harvest the fields in May, slow down the harvest in June-July and re-harvest those fields in August to get a better market. They experimented with that last year on a small basis and it worked so they’re trying it on a larger basis this year.” 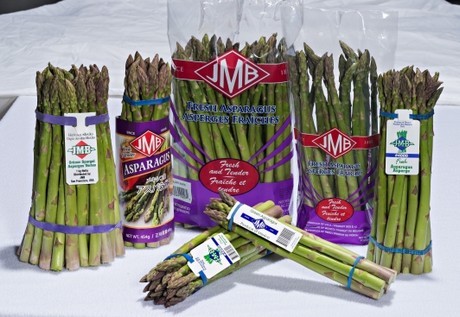 Other regions starting
On top of this, Washington is also supplying asparagus and Michigan began last week. Ontario, Canada will start this week. “So there’s adequate supply given the demand,” says Rolandelli.

In fact, demand has slowed somewhat. “It was pretty heavy through to the Mother’s Day pull last week and it’s levelled off now,” says Rolandelli. “I know there are some retailers looking at Memorial Day ads. The demand kind of matches the inbound supplies.”

Altogether, prices for now are sitting between $18-$22, which is similar to last year at this time. “But it’ll probably drop in the next couple of weeks into the teens when volume comes on and then pick up in August,” says Rolandelli.