"We grow around 25 million cucumbers per year," René Tielemans said during the Dutch television show BinnensteBuiten. Culinary expert Alain Caron visited the greenhouse in early March to see how the cucumbers grow and of course to create a dish with them together with René. René: “We really enjoyed the broadcast. It turned out to be a nice show and I already received many responses.” 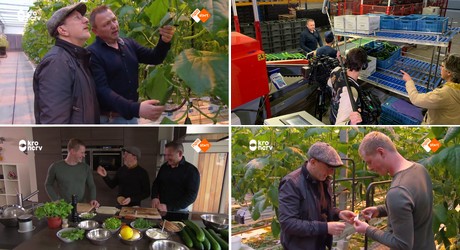 Many smaller sizes due to dark weather
In the broadcast, René first showed Alain the sorting process, where the cucumbers are sorted by size. At the moment there are more smaller ones among them than usual, according to René. “The market is really gearing up now and we are in full production. But because of the dark weather we are harvesting a lot of smaller cucumbers at the moment. You actually see this throughout the Netherlands, which means that the price for the larger sizes is quite high. Fortunately there has been more sun the last week and I expect to be able to harvest larger cucumbers soon. Now we still harvest about half with a weight of less than 350 grams and that has to improve to at least half weighing 400." 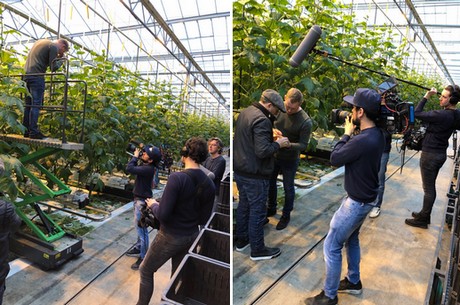 After a look at the sorting and packaging process, René went into the greenhouse with Alain. Here manager Giel Janssen introduced the culinary expert to the macrolophus, one of the biological controllers in the greenhouse. "So there is actually a big war going on here with all kinds of critters fighting each other," Alain explained. 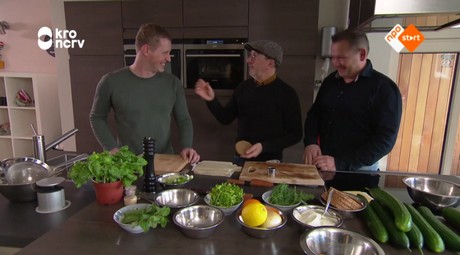 Giel, Alain and René cooking with cucumbers in the kitchen

Then came the time for the grand finale: using cucumbers in the kitchen to make a delicious and healthy meal. So they all left the greenhouse and went to René's own home. “The film crew was with us all day from 9 to 5, so cooking at my house provided them with a different environment, which they enjoyed. A show like this is a great way to promote cucumbers, and that's important, even though I won't immediately sell more cucumbers because of it."

View the show in Dutch here