Consolidation in the seed industry - a danger to growers?

The agriculture industry has seen several big waves of consolidation lately. Philip Howard, Associate Professor in the Department of Community Sustainability at Michigan State University, has been following developments in the global seed industry for years now. His latest chart illustrates how the “Big 6” agrochemical/seed firms combine into a Big 4. These four firms are now estimated to control over 60% of global proprietary seed sales. A number of the brands acquired in previous acquisitions have been retired. 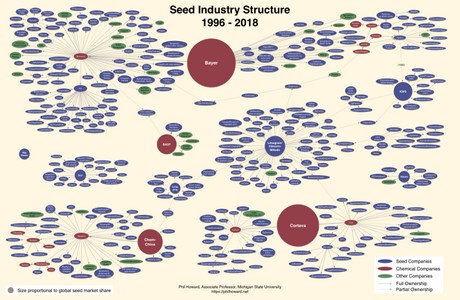 While this trend of consolidation will slow down, the end isn't in sight just yet, Philip believes: "Although there are few big acquisitions left to make, smaller seed companies will continue to be acquired, particularly in countries like Brazil, China and India."

Preventing monopolies
This concentration of power in the global seed industry begs the question if anti-monopoly authorities, which are supposed to prevent situations where too few companies have too much power, have ‘fallen asleep at the wheel’. Philip explains: "Antitrust laws, with pressure and influence from corporations and think tanks, have been dramatically reinterpreted, moving away from their initial intent, and toward very narrow and strict consumer welfare ideas. These are often approached theoretically as well, and empirical data to gauge whether or not consumers are harmed are rarely collected. There is a growing movement challenging these trends, which includes economists and lawyers, and is sometimes called the 'New Brandeis Movement.'"

'Less and less innovation'
According to Philip, the current situation of continued consolidation represents a danger to growers. "We have already seen prices increase dramatically with industry consolidation, although it has slowed in recent years as declining commodity prices make it difficult to extract more from growers. Research investment is also being centralized, focused on a smaller number of crops and traits within those crops, and on regions where these crops are planted most extensively. Those who are growing anything else are typically experiencing less and less innovation."

China in control
Chinese companies have been quite active in the market lately, for instance with the ChemChina takeover of Syngenta. Commenting on the increasing interest of the Chinese in the international agriculture industry, Philip says: "China is not self-sufficient in food, therefore the government is encouraging firms headquartered in China to make foreign acquisitions. The government of China has provided these firms with advantages, such as low cost financing, that competitors in other countries may not have. These advantages may be magnified over time, resulting in more and more control of the global food system by China, where the boundaries between governments and firms are even blurrier than many other parts of the world."

Consumer awareness
While consumers are becoming more conscious when it comes to what's on their plate, the seed industry is still somewhat distant and hidden from the view of most. "Even growers may struggle to know who owns the seeds they buy through intermediaries", according to Philip.

He does see a movement toward smaller (seed) suppliers popping up, however, just like what happened with local/urban farming making headway. "Yes, this is already happening. In the US, for example, a number of firms specializing in organic and/or open-pollinated seeds are small, but growing rapidly. Many are also associated with the Open Source Seed Initiative, which works to develop new varieties that promote sharing rather than restricting access to plant germplasm."