Thiel's Greenhouses is a household name in the horticulture industry. Serving the Lamont, Fort Saskatchewan, Bruderheim and Vegreville areas in Alberta with ornamental plants since 1958, current owner Nadine Stielow has taken the business to new levels. The next phase in the grower's career is the opening of a hydroponic lettuce greenhouse at Thiel's. 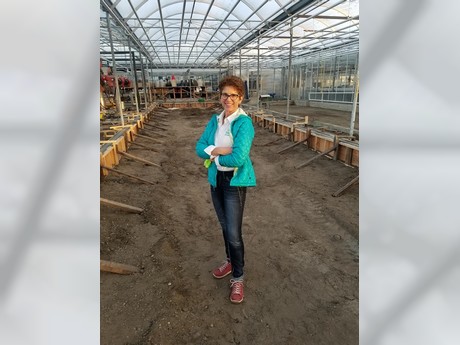 The new venture idea started three years ago after the team at Thiel's built a reclaimed greenhouse from another grower, dismantling it and reconstructing it at their site. "We built the space with the intention of expansion into a new crop, however, I didn't want to increase our current spring ornamental line", Nadine says.

"Growing up farming with my parents and grandparents I knew I wanted to grow a food crop but initially was unsure on specifics. Following a meeting with an industry consultant, the expansion process further evolved to choosing the type of diversification crop appropriate for the new space, in terms of crop height and overall structure size; I then began experimenting and learning about hydroponics by growing several trial crops (herbs and assorted greens) in small 4ftx8ft mini ponds that were piece built to replicate a floating raft style system." 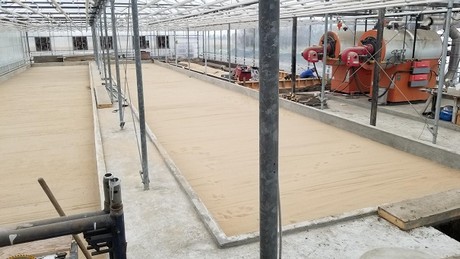 Nadine needed to become familiar with the basic process, equipment, supplies and even the terms in hydroponic growing. "Then I researched several styles of greens production systems to eventually source the 'perfect for our needs' equipment through one of my existing hort suppliers, A.M.A. Horticulture."

The system is designed and built by Dry Hydroponics from the Netherlands; Nadine also launched a crowdfunding campaign (utilizing a reputable local bank and their entrepreneur online platform) as a means to generate awareness and community excitement towards the new expansion project. "The overwhelming positive response from area businesses, municipalities and the general public confirmed my initial thoughts on growing local food. It transformed from a passing idea to a passionate goal. Now finally, we are in the last stages of the project build and have just completed an exciting week of the whole team coming together to finish the system. This past week the first trial batches of lettuce have been seeded and now several hundred seedlings are ready to go into the ponds. The inaugural launch, so to speak!" 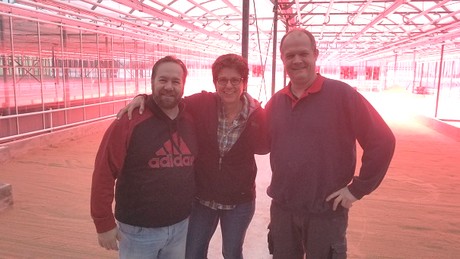 Dream Team
The greenhouse, featuring 6,500 sq. ft. total space with approximately 4000 sq. ft. of hydroponic ponds, was realized with the help of a group of carefully selected companies. "My hydroponic 'Dream Team' came together quite simply because the companies that I selected to supply the system are all top notch in terms of standing behind their products, their knowledge and their commitment to customer success", Nadine says. "Aligning myself with like-minded companies that support my vision and goals makes doing business with them feel like team work rather than just a transaction." 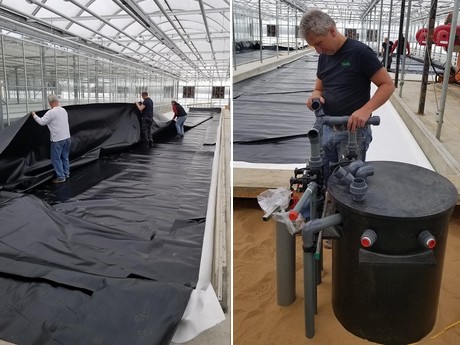 Help from concept to construction
One of the members of the 'Dream Team' is A.M.A. "I've been a customer of A.M.A. Horticulture for almost ten years and know them to be most helpful, knowledgeable and always on the leading edge. Very resourceful", according to Nadine. "For my specific project, this expansion - they were beyond patient and helpful as I researched and worked through the planning process to get from concept to construction. I had to know it was the right move for my business and A.M.A. offered advice with every step. A quality company with caring insightful ownership and management. It's these corporate characteristics and the type of business partnerships I search out and value as a business owner." 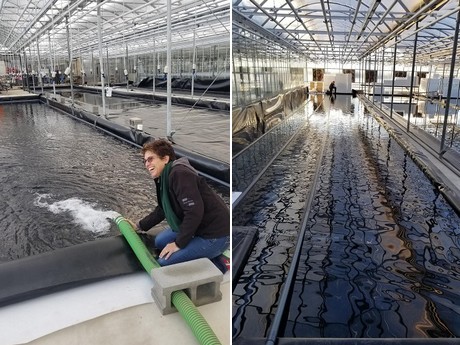 Epic hydroponics tour
On a greenhouse tour in Holland last January, Nadine spent two afternoons at the Dry Hydroponics facility and demo field. "It was epic", she recalls. "A mind expanding, thought provoking, exciting business growth visit. I was there with several industry colleagues and in that time frame had every question asked and answered in order to make my final decision on the system in which to invest." And thus, Dry Hydroponics became another Dream Team member. 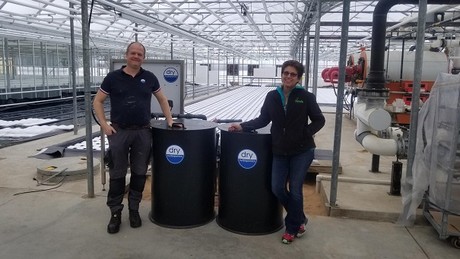 "If I had to sum up the overall 'why' I chose Dry Hydro - it's their passionate yet stoic enthusiasm for the system they've developed, its many merits and the solid engineering behind it. I knew, as I ventured into this learning curve of hydroponic growing, that I would be in knowledgeable and professional good hands. The project support we've already received, from the planning stage video conference calls, and many emails, to the week of the final build and onsite consultants - all are valuable reasons why I know the system will work for my business." 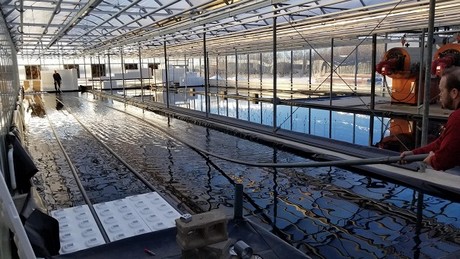 Knowledge sharing leads to LED
Before deciding to install LEDs as part of the expansion, Nadine researched systems and had the chance to connect with many experienced Alberta vegetable greenhouse growers. "Producers already growing the best quality crops and willing to share their knowledge and recommendations. I've said it before, but it's worth repeating, there's no industry quite like horticulture for business collaboration and information sharing. I love it!" 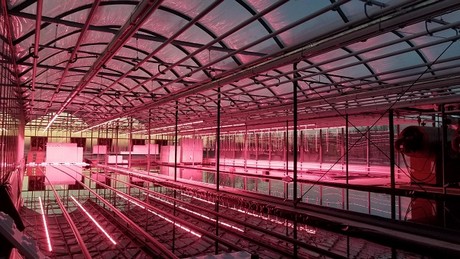 After researching several lighting suppliers, Thiel's settled on the vendor supplier partnership of Ball Horticulture and Philips Signify. "They specifically gave me the most assistance and support in terms of my initial research and learning, then developed a custom light plan specific to our needs with onsite consultation and the eventual ordering and ongoing support during our installation process", Nadine explains.

"On a fun note: the pink LED glow is creating quite a buzz in our small rural town. Lots of enthusiasm and interest. The local newspaper even created a cartoon - you know people are talking when a cartoon surfaces!" 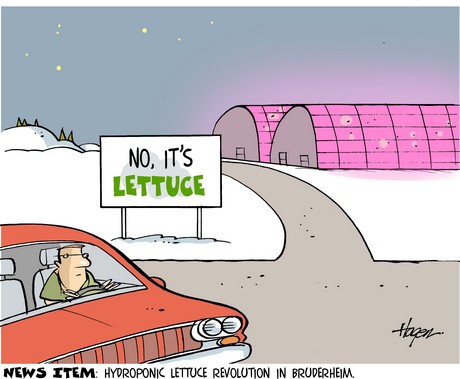 The cartoon that appeared in the Fort Saskatchewan Record. Reprinted with permission from the artist, Ralph Hagen.

Committed to biocontrol
Rounding out the Dream Team is the beneficials control advice and products from Biobest. Nadine is committed to growing her ornamental crop using biocontrol, and she looks forward to using the same principles for the new greens production. "Albeit, some new strategies will have to be implemented with adjustments for more crop turns and expanding into year round production."

Implementing a strong company commitment to promote biocontrol education has also helped Nadine solidify her own methods. "Basically by teaching it and talking about it all the time, it has become ingrained in our business culture. We've hosted several industry IPM days inviting biocontrol product specialists and experts to educate growers; we've hosted educational and fun events for the public and I've had the opportunity to present at conferences on my grower perspective using bios in production and also as a marketing tool to communicate with the end consumer about our clean growing practices." 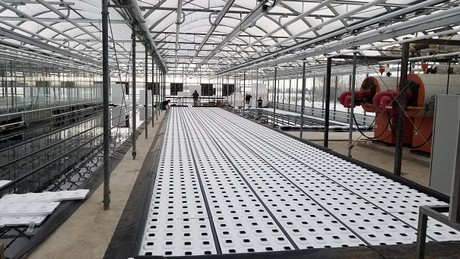 Regarding the bio program in the hydroponic lettuce greenhouse, Nadine says: "Overall, I intend to ask a lot of questions, learn from already successful hydroponic growers and expect the same helpful expertise as I've always had, using bios in our ornamental side of the business while incorporating it into the hydroponic expansion. Although I've had the opportunity to utilize various suppliers, I've been a customer with Biobest for almost ten years and have had very helpful and knowledgeable tech support. I'm anticipating new biocontrol challenges in hydroponics but am ready to adapt and innovate as needed." 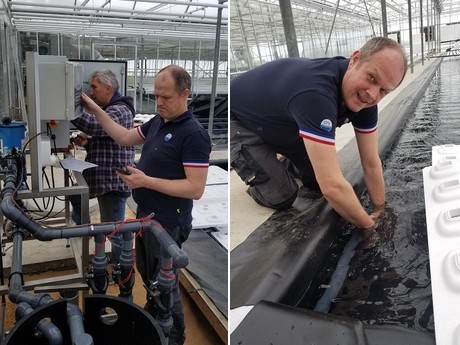 Fresh greens (and strawberries?) for Albertans
"Our projected production", Nadine tells us, "is up to 1900 pieces of fresh local deliciousness per week in a small rural area with several nearby towns and cities. Intended markets are the local restaurants, grocers and food service industry providers plus some direct sales. All to the east central areas of Alberta. Currently, in our immediate area, this is the first hydroponic greens system of its kind." 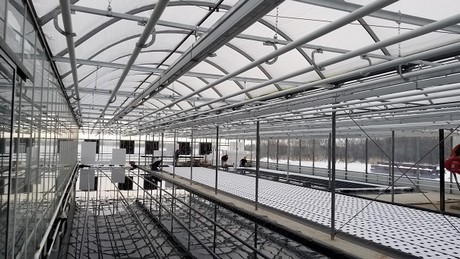 Eventually, Thiel's may expand into other crops as well. "I'd like to grow more fresh local food to fill a growing consumer demand and niche market in our area. On a very preliminary 'glance' I've looked at strawberry production systems and have had the opportunity to tour a few of these greenhouses." But that's for later. "First I'll grow some greens and then I'll look to my next venture!" 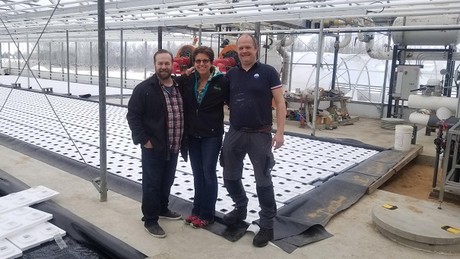