After findings of the Tomato brown rugose (ToBRFV) fruit virus in Germany, California and Sicily, the virus has now been reported in Mexico. In September 2018, ToBRFV was first detected in 8 nurseries growing tomatoes and capsicum in the municipality of Yurecuaro (State of
Michoacan). The virus was also detected in October 2018 in the State of Guanajuato. 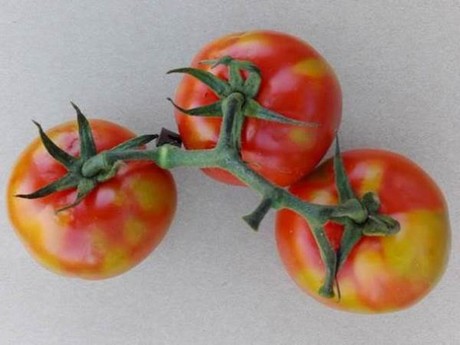 What's this?
ToBRFD is popping up in more horticultural places. ToBRFV is a relatively new virus and is related closely to TMV and ToMV, the Belgium experts of Proefcentrum Hoogstraten explain.

Almost all current available tomato varieties are resistant to both TMV and TOMV, but this new virus broke the resistance. The symptoms are similar to the PepMV.

ToBRFV can spread out easily within a greenhouse since it can spread out via hardware being used in the greenhouse. Spreading from one greenhouse to another can occur via visitors or seasonal workers, exchanging material but also birds or bumblebees, or even a united packing hall.

Currently it is thought ToBRFV is not transmitted via seed, but there's no guarantee on this claim. Tobamovirusses in general, are very persistent and can survive for a long time without a host plant and on inert materials like clothes or tools, in plant rests, soils or anything without losing their virulence. Therefore a thorough disinfection during crop rotation is advised as well as hygiene rules during the crop.

Start in Germany
In July 2018, unusual fruit and leaf symptoms were observed in numerous greenhouses cultivating tomatoes commercially in the Lower Rhine region of North-Rhine Westphalia, Germany.  In total, more than 25 ha of greenhouse tomatoes were affected. ToBRFV has been confirmed in 7 greenhouses with tomatoes in North Rhine-Westphalia.

Italy
Last week the Italian professor Walter Davino shared the discovery of the virus in Sicilian greenhouses. “It is a very dangerous virus because it can be transmitted in multiple ways. It is crucial to be careful about the contact between each plant and the operator working in the field. There are pieces of evidence showing that it can be transmitted through the seed, as well", he explained.

The presence of ToBRFV was confirmed in one greenhouse (2000 m2) growing tomato (Solanum lycopersicum) in Ispica municipality (Ragusa province). About 10% of plants were infected but symptoms were not severe. Further surveys will be conducted in the area to detect potential other outbreaks.

California
The CDFA also reports findings of the virus in California. In September the organisation detected Tomato brown rugose fruit virus (ToBRFV) in a tomato plant tissue sample sent to them by a private company in California. The sample had been collected from tomato plants grown in the company’s greenhouse in Santa Barbara County.  On September 13, 2018, the company had also sent an unofficial symptomatic tomato leaf sample to CDFA for diagnosis of the associated pathogen. On November 2, 2018 the CDFA identified the associated pathogen as Tomato brown rugose fruit virus. On further investigation of the situation in California, CDFA was notified by the company that all ToBRFV-infested and symptomatic plant material had been voluntarily destroyed, thereby preventing the collection of an official sample. Nevertheless, the risk associated with the possible introduction of ToBRFV and a proposed rating for this pathogen is documented at the CDFA website.

The virus has been found in California before. In 2017 circumstantial evidence of a new virus disease rapidly spreading mechanically in tomato crops in Baja California Sur was reported. In July 2018 plants in protected greenhouse from Ensenada, Baja California carrying the Tm-2 and Tm-22 resistance genes effective against ToMV showed severe mosaic, blistering and leaf distortion, APS Journal reports. The isolated sequence showed a 99.8 and 99.9 % nucleotide homology with Jordan and Israel isolates.According to the magazine, this was the first report of ToBRFV in America.

Mexico
In September 2018, ToBRFV was first detected in 8 nurseries growing tomatoes (Solanum lycopersicum) and capsicum (Capsicum sp.) in the municipality of Yurecuaro (State of Michoacan).

The identification was confirmed by RT-PCR and sequencing. The virus was also detected in October 2018 in the State of Guanajuato. Additional surveys are planned to detect new outbreaks and phytosanitary measures are applied to control the disease. The pest status of Tomato brown rugose fruit virus in Mexico is officially declared as: Transitory pest, actionable and under eradication.

Earlier findings
ToBRFV was discovered in Jordan in 2015, but already occurred in Israel in 2014. ToBRFV infects tomato plants and leads to mosaic staining of the leaves as well as discoloration and deformations of the fruits. Foliar symptoms included chlorosis, mosaic with dark green bulges and narrowing Fruit symptoms consisted of yellow spots, often concentrated around the calyx with occasional rugose symptoms rendering the fruits non-marketable. The new isolate sequence (TBRFV-Mx, MK319944) shows a 99.8 and 99.9 % nucleotide homology with Jordan and Israel isolates, respectively.