As reported by the associations representing the district of Pachino, Sicily, the tomato, melon and watermelon campaigns are not bringing great results at all. FreshPlaza interviewed Massimo Pavan (on the picture), vice president of the Consorzio Tutela IGP "Pachino tomato" and area sales manager for Italy of the company Pef srl, to offer his insights regarding the situation in the tomato market.
"We are experiencing a market crisis about two months earlier than usual," states Pavan; "a result of the advance of foreign productions, which has already had a negative impact on other horticultural products and which has been the consequence of an exceptionally mild winter."
"Virtually all purchases of Italian and Sicilian produce by foreign countries stopped already in mid-April, while imports continued normally until mid-June. Only then has the domestic production suffered a sharp decline. This year, the price collapse came early, with catastrophic consequences for producers. We had to face a total lack of demand at the time our tomato production reached its peak, and this combination of factors resulted in ridiculous prices, unable to cover the production and harvesting costs."
Depending on the type of tomatoes, prices can reach extremely low levels: 30 Euro cents / kg for the cherry; 40 cents / kg for piccadilly; the plum reach barely 50 cents / kg and on the vine tomatoes collapsed to just 20 cents / kg. The green tomato varieties totalled between 20 and 50 Euro cents / kg.
According to Massimo Pavan, the Sicilian situation is now irreversible: "In about a month, in fact, the harvest will end and I do not anticipate major changes in the short term. The favourable climatic conditions in some countries have been like a natural disaster for us, and in my humble opinion it is not over yet, there may be implications that we haven't yet foreseen, perhaps an early finish for the foreign productions, which could result in a supply gap lasting perhaps until September-October." 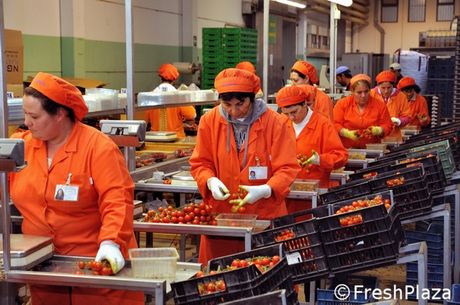 The manager concludes: "The marketing problem does not apply only to Pachino tomatoes, but to tomatoes in general. The PGI (Protected Geographical Indication)-branded product stands a better chance than the conventional produce, but it also suffers the consequences of the negative context."