Greece's greenhouse growers could face problems next week if the situation with the frozen bank accounts does not improve. As the Greek Central Bank has taken measures to prevent a capital flight abroad, greenhouse growers and distributors of imported greenhouse supplies like fertilizers, technology and substrates, are not able to pay the outstanding bills for imported goods. "The money is here, but we are simply not able to pay the bills this week," said Christos Katsanos, an agricultural consultant from Greece based DKG Group. Despite this situation, Katsanos remains positive. "This will only contribute to a stronger development for the Greek greenhouse industry, its the only industry in Greece that I feel confident about!"

Some of the greenhouse growers in Greece are about to transplant to a new crop. Therefore they need to order new seeds from Holland or Israel. Some of them are already paid, but according to Katsanos, the closed banks might create a difficult situation next week, as outstanding bills for the supplies cannot be paid yet. "This week it is not a problem yet, as we still have enough stocks available, there are enough fertilizers and other materials available. We all are cautious about the decisions and announcements for the next week." 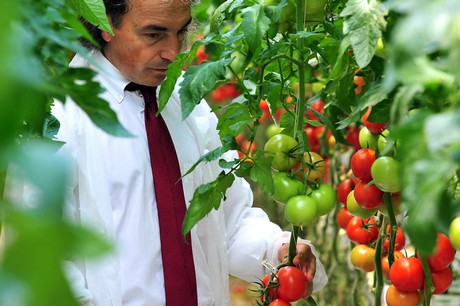 Tonight at midnight, Greece is to pay 1.6 billion euros to the IMF, money that the country doesn't have in the till. Bankruptcy is looming, but nobody knows what will happen exactly. Greece will technically go bankrupt if the money isn't paid by tonight. Borrowing becomes impossible then. The banks will remain closed all week, and payment transactions are limited. The banks are taking this measure to prevent too much money from being diverted or withdrawn. The Greek Central Bank has taken measures to prevent a capital flight abroad. For withdrawing cash money, there's a limit of 60 euros per day per account.

According to the optimistic Katsanos, the situation in Greece will eventually contribute to a stronger development for the Greek greenhouse industry. "At this moment, we are exporting a lot because it is attractive. At the same time, food production is the first necessity, so in the future the greenhouse industry will further develop because of the critical situation, this is the moment to develop markets. That is why horticulture and agriculture are the only sectors in Greece that I feel confident about today."

In 2013, we spoke to Katsanos about greenhouse development in Greece, he then announced his expectations for investments for about 50 hectares in Greece. According to him, this expectation still stands. "We are still in touch with investors, but the lack of a decent government framework for investors, slows down some plans. Still, we feel confident that eventually a supporting framework can be created that will put this back on track."