ECW in Middenmeer wants to use geothermal heat to provide additional heating for buildings and greenhouses in Agriport. Delegate Ilse Zaal, together with director Robert Kielstra and alderman Lilian Peters (Hollands Kroon), gave the go-ahead for the project to realize a fourth geothermal doublet.

Geothermal heat has been extracted at Agriport since 2013 to reduce dependence on gas and CO2 emissions. It offers huge potential as a renewable energy source.

Fourth doublet
ECW is now realizing a 4th doublet at Agriport. A doublet has one production well for pumping hot water and one injection well that returns the water to the same ground layer at a depth of 2.5 km. The pumped water remains in a closed circuit. Through heat exchangers, the heat is released to mains water, which is transported with the existing heat network. Commissioner Ilse Zaal was present in Middenmeer at the start of the drilling.

Ilse Zaal: "This is an important step for making greenhouse horticulture in North Holland North more sustainable. With the geothermal heat, greenhouses will be sustainably heated, and less natural gas will be used to produce tomatoes and peppers, for example."

Less gas
Due to high energy prices, horticulturists at Agriport used about 30% less heat in 2022 than in previous years. The production and use of renewable heat has never been higher than last year. It has resulted in gas savings of about 40% compared to 2020. 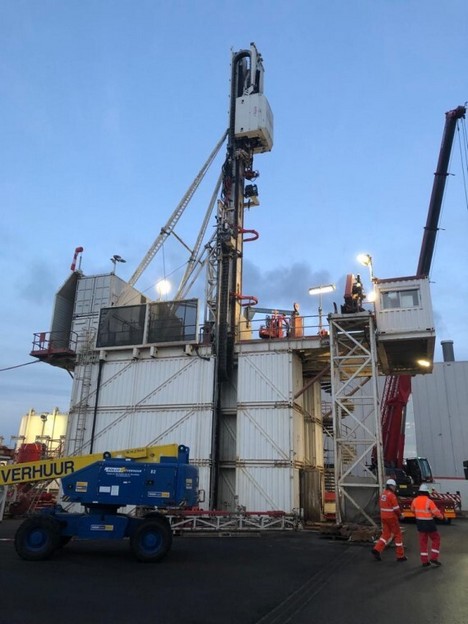 The construction of the doublets requires a large drilling rig. This is fully electrically powered and consists of a mast structure about 40 meters high. Attached to it is the drive of the drill, which can move up and down through the mast. The drilling will be carried out until mid-February/March.