To consistently deliver strong young brassica plants in line with its customer promises, Dutch nursery Plantenkwekerij Gitzels is focused on continuous improvement based on innovation and technological advances. Matthijs Woestenburg, the nursery’s R&D specialist, has discovered that the Plant Empowerment philosophy is a perfect fit with this approach. “I feel very lucky to have had the freedom to experiment with this concept, and I’m even happier to see that it works,” he says.

“The plants we raise must be as strong as possible”
Matthijs Woestenburg has been at Dutch brassica nursery Plantenkwekerij Gitzels since 2016, having initially worked at the company as an intern while studying for his degree in horticulture. “As part of my graduation project, I analyzed the company’s past business performance and concluded that much of the success so far had been thanks to the strong focus on innovation and being open to trying out new technological advancements. Not long after, I joined the company as an R&D specialist,” recalls Woestenburg.

This reflects the company’s commitment to investing in continuous further improvement of the efficiency and profitability of its operations while maintaining high standards of quality and service. “As a plant raiser, we produce everything to order. Each spring and summer, our customers depend on us to deliver on the promises we made to them in the previous autumn. Therefore, our production operation must be as reliable and predictable as possible, and the plants we raise must be as strong as possible. That’s why we’re constantly asking ourselves how we can do things a little bit better,” he adds. 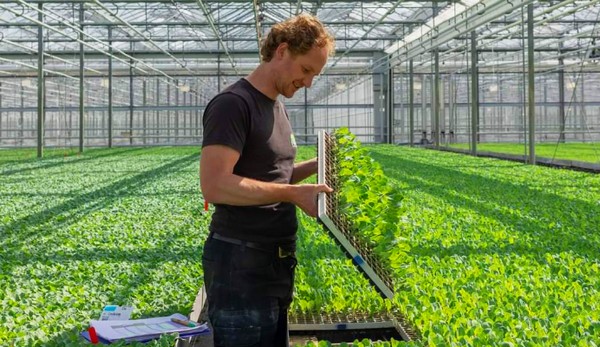 Different perspective
Woestenburg has discovered that the Plant Empowerment philosophy is a perfect fit with this approach. “After doing several training courses in the past couple of years, I have learned how to view things from a different perspective and to think about what the plant really wants. So instead of just assessing the crop based on looking and touching, we’re increasingly using data as the basis for analyzing the plant’s actual behavior. We still walk around the greenhouses every day and use all five of our senses to evaluate the condition of the crop, but if there are any issues, we always analyze them in conjunction with the data. And the Plant Empowerment principles have helped us to better understand exactly what is going on with the plant,” he explains.

“In addition, just last year, we upgraded our climate computer from the Hoogendoorn iSii to the IIVO. Ted van den Akker provided outstanding support during the implementation, and everything finally went online last October. This computer now automatically controls all our greenhouse systems – from the irrigation and pumps to the screens,” continues Woestenburg. “I particularly like the fact that it’s a web-based system, so I can review all the data and adjust the settings using my smartphone without having to be in the office. If I’m in the greenhouse and I decide to open the windows or the screens a little wider, for example, I’ll see it actually happening almost immediately. Besides that, the system is very user-friendly, with a clear dashboard for data comparisons and analysis. In fact, I’m currently teaching a new colleague how to work with it and because it’s so intuitive, it’s pretty easy to explain.”

Measuring outgoing longwave radiation
The Plant Empowerment principles, in combination with the IIVO, have enabled Gitzels to completely adapt its crop strategy in order to manage the temperature and humidity to maintain a homogeneous climate. “One key change is that we now use a Pyrgeo sensor to measure the outgoing longwave radiation as the basis for our screening/shading strategy,” he says.

“This is an important factor in the energy balance of plants and in the greenhouse as a whole. On a clear day, even though the air temperature is still within the right range, the reflected radiation can cause the leaves of the plants to cool down too quickly and make them susceptible to downy mildew. So we have calculated the tipping points for the net radiation and programmed them into the IIVO. Now, rather than working with a fixed screening schedule that is the same every day, the IIVO opens and closes the screens automatically based on the Pyrgeo sensor readings. This prevents the undesired cooling of the crop and is also valuable as an energy-saving measure.”

Humidity challenges
However, closed screens increase the risk of humidity in the greenhouse, and that is one of the biggest challenges at Gitzels because fungal diseases are a major threat to the brassicas. “My colleagues were initially surprised when they saw that the screens were closed quite early on bright days. It goes against your natural instinct, which is to give the plants as much sunlight as possible for as long as possible. But the plants don’t use those few extra rays of light at the end of the day for photosynthesis anyway. It’s more important to maintain an optimal climate so that they can keep taking up water and nutrients and can keep the evaporation going.”

Law of physics
The Plant Empowerment principles have changed his thinking in terms of heating too. “It’s the law of physics; the more energy you pump into a greenhouse, the more the plant will evaporate, which will increase the humidity. In other words, turning up the heating doesn’t solve the problem; it makes more sense to open a window.” Therefore, Woestenburg now only uses heating as a last resort if the outdoor humidity is the same as the humidity inside the greenhouse. Instead of heating, he closes the screens – but always with ventilation above them. “I keep the top of the greenhouse a couple of degrees colder than the rest to optimize the airflow. We’ve installed sensors just above and also just below the screens to continuously monitor the temperature difference and ensure that the cold air doesn’t make its way too far down into the greenhouse. Opening the windows just slightly is often sufficient to ensure that the hot and humid air rises to the top and is extracted without upsetting the other balances.”

Minor adjustments, major effect
This new ventilation strategy is an example of the biggest eye-opener for Woestenburg, which is that minor adjustments can have a major effect: “We sell the plants when they are 15cm tall, but they need to be compact, upright and sturdy enough to withstand a few knocks during machine-harvesting. In the past, we tried all kinds of drastic techniques to slow down their growth – such as a cabrio greenhouse, a very high EC, or huge temperature decreases in the morning. We’ve come a very long way since then because we no longer do any of that. Now, we base our decisions around what the plant actually needs,” he comments.

Light as a fundamental principle
He admits that it is sometimes difficult to maintain the right balance. “In May or June, when temperatures can reach 25-30⁰C in combination with lots of sunlight, it can make sense to close the shades to reduce evaporation and protect the plants from drying out. But if the temperature rises in combination with reduced light, the plants grow too quickly, leaving them tall and weak,” he explains. “Therefore, we’re now exploring grow light as a fundamental principle. In fact, we’ve just started working with our long-standing screen supplier Ludvig Svensson to investigate how we can further optimize our screening strategy using the PARperfect system. The aim is to identify the ideal amount of photosynthetic light for our plants throughout the day and to adapt and automatically control our screening strategy accordingly. It’s still early days, but it’s a very interesting project.”

Future plans
Besides wanting to get a deeper understanding of how to optimize the light levels, Woestenburg has a longer-term dream. “Ideally, I would like to be able to set recipes and regimes for each phase of production. However, we have around 50 different varieties of cauliflower alone, plus we also produce other crops such as broccoli and cabbage. In fact, we sow our plants based on which week they will be shipped, which means we can sometimes have as many as ten different plant types in a single area of the greenhouse. This makes it more difficult to standardize and fully automate our approach than if we were only growing a couple of varieties,” he reveals.

Despite these future ambitions, Woestenburg is already happy with the improvements that he has achieved so far, thanks to the Plant Empowerment way of thinking. “Over the past year, in combination with diffuse glass, we have consistently achieved more yield and better quality. For example, our plants are 10-20% heavier and more compact. Besides that, they are more resilient, so I’ve been able to drastically reduce the number of sprayings; we’re now down to just one per crop cycle as a precautionary measure. We have also reduced our use of inputs such as water and energy, so Plant Empowerment has definitely enabled us to improve our efficiency. I feel very lucky to have had the freedom here at Gitzels to experiment with this concept, and I’m even happier to see that it works,” he concludes.