Fifth Season – a food system pioneer and the first player in the vertical farming space to launch ready-to-eat salad kits with distribution in 12+ states in over 1,200 locations – is upping the ante again with a bold new package design, as well as a brand new flavor variety.

Fifth Season operates a 60,000 square-foot fully-automated vertical farm in Braddock, Pa., that, because of its advanced technology, has twice the growing capacity of traditional vertical farms. Using robotics and AI, crops are grown under the perfect conditions, taking light, water, and even 'wind' into consideration, so they end up deliciously crisp and flavorful every time, all year round. These greens are then paired with top-notch plant-based, protein-rich, and whole grain inclusions to create a diverse variety of salad flavors – including the newly-launched Taco Crunch, which features Sabra's popular creamy guacamole alongside Fifth Season's crunchy baby romaine.

"Most pre-packaged salads contain sad, wilted, not-so-fresh lettuce that, for the most part, is there to be filler," says Austin Webb, CEO & Co-founder of Fifth Season. "But because our greens are raised so carefully to be remarkably crisp and delicious, they are actually the star of our salads. Our package design and branding now showcase that."

That advantage takes shape in Fifth Season's completely reconstructed packaging that was built with functionality in mind. The salad mix-ins now sit atop the lettuce in a bento-style tray, separating those ingredients from the greens. This gives the robust lettuce the room it needs to remain intact without being tamped down by toppings, keeping it fresh and hearty for days longer in your refrigerator than conventionally grown greens. 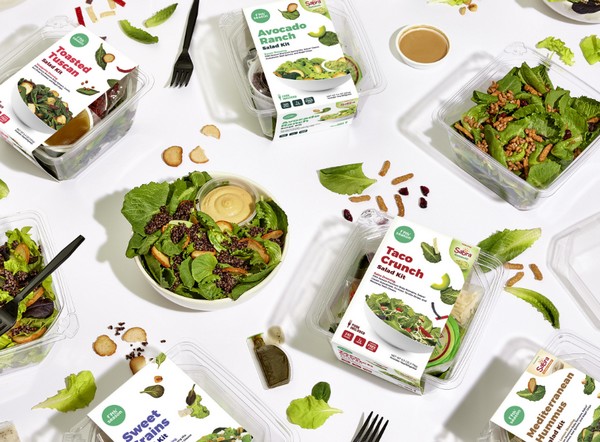 But this packaging redesign does more than just store the ingredients in the smartest way. It also was built to create the best grab-and-go salad eating experience possible for the consumer. The extra room in the bowl allows for "maximum shakability": Once the toppings and dressing are added, the salad is properly tossed with a couple of quick shakes, and all components end up well-combined and coated with dressing, lending itself to forkful after forkful of flavor-layered bite.

Speaking of forks, Fifth Season salad kits now include them! With a recyclable fork now tucked into the package, the grab-and-go salad kits can more easily be eaten on the run, working well into the busy lifestyles of their consumers.

Fifth Season also recently announced plans to build a second fully-automated farm in Columbus, Ohio. This location is still in development, and further details on this expansion will be released in the near future.