In the future, fruit growers may be able to suffice with a single robot that can harvest, prune and weed their trees year round. Agro Food Robotics' Next Fruit 4.0 project is developing grippers and pruning shears that can automatically select the right fruit to pick and branches to prune based on image analysis.

Growers of apples, pears, berries, and other fruit are sometimes literally short of hands. The problem is felt most during the harvest season, but labor is also scarce for other work in the orchard. "The sector really needs automated solutions," says Jochen Hemming, researcher at Agro Food Robotics. "But harvesting robots are still under development, and when they are ready to be used, they will be pricey."

In the Next Fruit 4.0 project, Hemming and his colleagues are working with fruit and robotics companies to develop a multifunctional robot. The harvest only lasts a few weeks, but the same robot that trundles around picking fruit could also be used for other tasks in the orchard. "We think that an orchard robot should be able to do more than just harvest fruit," says Hemming. "It could also weed, prune, and thin flowers, for example. This would make the investment much more worthwhile for the growers."

Robot with multiple hands
The multifunctional orchard robot is an autonomous vehicle that carries a storage bin and has a robotic arm to which the grower can attach several different 'hands' (grippers or other tools). It also has a detection system that takes and analyses images using artificial intelligence. During the harvest, the robot drives through the orchard, locates ripe fruits, plucks them from the tree, and places them in the bin. This sounds simple, but that is not the case. "The problem is the variability in nature," says Hemming. "No apple or pear is the same, and a tree is a complex 3D structure. The robot has to be able to deal with this." 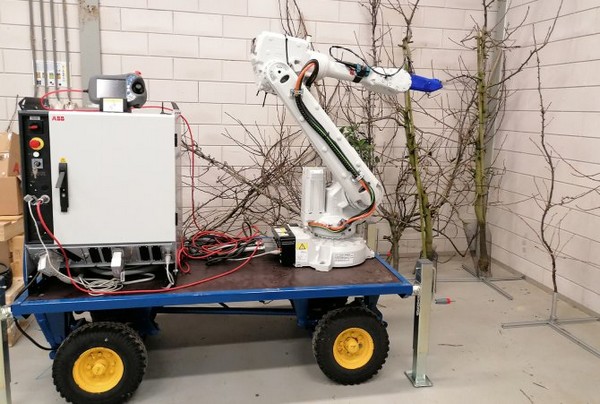 The multifunctional robot from project Next Fruit 4.0

Harvesting pears
The development of grippers for apples is already well-advanced all over the world, but grippers for pears are still in their infancy, which is why the researchers decided to focus on this market first. "Picking pears requires a different technique than picking apples," Hemming explains. "Importantly, the stalk has to remain on the pear because otherwise, the fruit will rot faster. So the right picking technique does not only involve carefully determining the position of the fruit but also its orientation." He will also be investigating whether a force sensor in the gripper could help with this precision work.

Over the past year, the researchers have been collecting images in the orchard and developing software to determine the position of pears in a tree. The gripper will be tested for the first time outdoors during this autumn's harvest.

Pruning shears that know where to cut
Hemming is not only cooperating with pear orchards; he is also working with growers of redcurrants. They need robots that can automatically prune their berry bushes in winter. To this end, the researchers will first develop automated pruning shears for berry bushes and only later shears for apple and pear trees, which have more complexly structured branches.

Even more multifunctional
Next Fruit 4.0 started in 2020 and will end in 2024. Hemming hopes the pear gripper and the pruning shears for berries, apples, and pears will be working efficiently by then. In the meantime, the researchers and the cooperating companies are exploring the possibilities of even more tools for the robot. "You could also use these robots for precision spraying of diseases on individual trees. The more functions you can combine, the better. The robot will only become economically viable if you can use it to do more than just harvesting or pruning," Hemming concludes.