Reducing CO2 emissions in the Dutch greenhouse horticulture sector is a 'major challenge.' This is the conclusion of a study conducted by Rabobank.

The bank estimates the current level of CO2 emissions from the Dutch greenhouse horticulture sector at 6.68 megatons of CO2 equivalents (Mt CO2e), excluding methane. The bank expects that the sector can achieve the target set by the government for 2030 (a maximum of 4.8 Mt CO2).

The study concludes, among other things, that there are substantial regional differences in the opportunities for reducing CO2 emissions in the greenhouse horticulture sector. In areas with highly concentrated greenhouse horticulture (such as South Holland), this is easier to achieve than in areas with many scattered small clusters or solitary glasshouses. This can lead to changes in the competitive position of businesses and thus the financial viability of the various horticultural regions.

Furthermore, it is argued that the approach to reducing CO2 emissions has so far been strongly dominated by a business-oriented and sectoral approach. Especially for smaller horticultural areas, the bank advocates a more area-oriented approach with all stakeholders (entrepreneurs, property owners, authorities).

Differences between provinces
In the study, the bank first discusses how the figures on emissions were arrived at and what savings options there are (read the original here). Then it looks at what can be done in each province. The bank notes that the regional situation varies widely. It writes:

"Dutch greenhouse horticulture is not evenly distributed across the country. Approximately 47 percent of the area in 2021 was located in the province of Zuid-Holland. Other provinces with a share of more than 10 percent of the national area are Noord-Brabant (15 percent) and Noord-Holland (10 percent).

At first glance, it seems plausible that CO2 emissions from greenhouse horticulture would have the same distribution. However, crops with higher heat demand are not equally distributed over the country. In addition, CHPs are used more for some crops than for others. So the results show that ultimately 49 percent of CO2 emissions come from South Holland, 13 percent from North Brabant, and 9.5 percent from North Holland."

Below, the bank discusses CO2 emissions, sustainability gains already achieved, and the savings options for the period 2023-2030 by province.

Key to the graphs:
The letters stand for:
A. The calculated emissions for heat and electricity at the companies
B. The emissions of electricity supplied to third parties
C. The already achieved reductions through geothermal heat
D. Other sustainable energy

South Holland
South Holland is home to almost half of the Dutch area under glass. Due to the high concentration of greenhouse horticulture, various geothermal energy projects have already been realized in the past decade, and several more are planned for the coming years. South Holland can make a huge contribution to reducing greenhouse gas emissions by implementing these geothermal and residual heat projects. It can achieve a 65% reduction in provincial emissions by 2030 - subject to certain conditions. 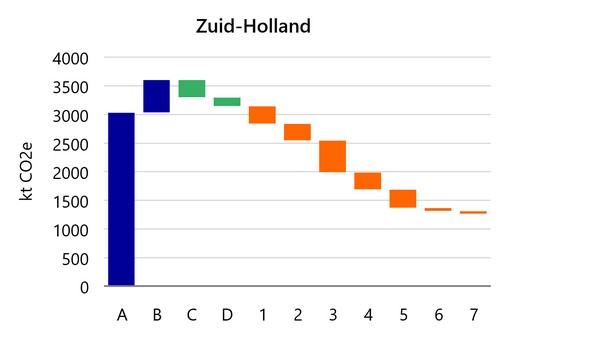 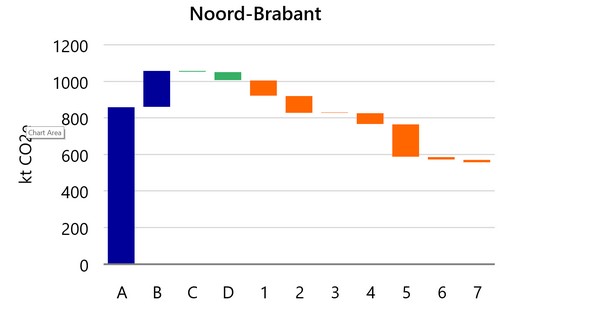 North Holland
The area in North Holland is 10 percent of the national total with 8.7 percent of national emissions. A great deal of emission reduction has already been achieved in North Holland. This has been done mainly by using geothermal heat for greenhouse horticulture in Middenmeer and 'Het Grootslag' (Andijk). This is not the case in Aalsmeer/Haarlemmermeer. In North Holland, the savings potential is 43%, of which almost half has been realized in the past ten years. 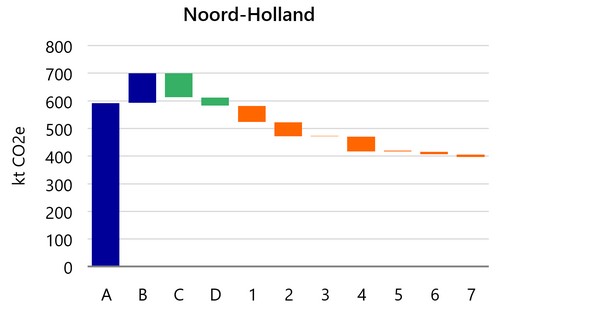 Limburg
The area under glass in Limburg accounts for 9.0 percent of national emissions. The area in Limburg is 9.3% of the national total. Limburg has small glasshouse clusters, each with a size of between 20 ha and 100 ha of glass. The reduction potential is estimated at 43%.

In Limburg, a large part of the potential comes from disused geothermal wells, but geothermal heat is still provided as an energy-saving option in the period 2027 to 2030. Without geothermal heat, the model gets no further than a 26 percent reduction. Geothermal options are highly dependent on the attitude of the State Supervision of Mines and the Ministry of Economic Affairs and Climate Change. Without improving the prospects for geothermal heat, Limburg will have to look for alternatives. This is particularly difficult in the period up to 2030, after which (green) hydrogen may offer opportunities. 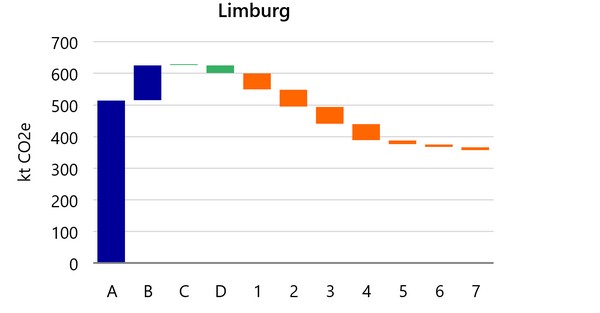 Gelderland
7% of the national area of glasshouse horticulture is located in Gelderland, which accounts for 6.5% of national emissions. Half of that area is in the Bommelerwaard (Zaltbommel, Maasdriel) and about 20 percent in the municipality of Lingewaard, but there are also quite a few solitary growing locations. Especially in Bommelerwaard, crops with higher heat requirements are grown. The electricity from the CHP is also used much more for lighting there. In Gelderland, additional use of geothermal heat is not yet anticipated in the first few years but rather in the period 2027-2030. 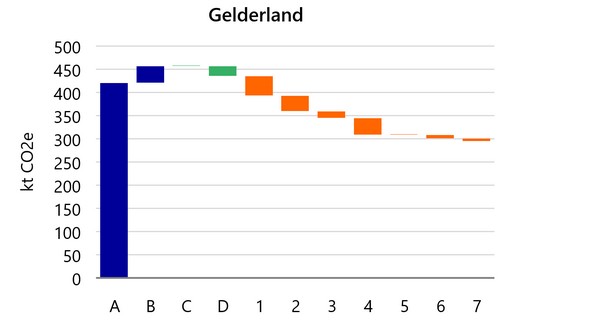 Other provinces
The area of greenhouse horticulture in the other seven provinces together amounts to 12.1 percent of the national area. The current calculated emission is 13.7 percent of the national total. Friesland, Flevoland, and Overijssel, in particular, make extensive use of CHP and feed electricity back to the public grid, which means that emissions from electricity generation have a high impact on the total.

In Drenthe, on the other hand, there are fewer crops that use CHPs for external supply. The savings already achieved in these provinces also vary widely. Mainly because in Overijssel (IJsselmuiden) and Flevoland (Luttelgeest), geothermal heat is already used to heat the greenhouses, which means a substantial reduction in CO2 emissions has already been achieved there. The estimated reduction in CO2 emissions in Overijssel will be achieved mainly through the additional use of geothermal heat.

It is also worth noting that the characteristics of the horticultural clusters in these provinces differ greatly. In Overijssel, there is one concentration (IJsselmuiden). In Drenthe, the area is located in Klazienaveen and Erica. Flevoland has a large concentration in Luttelgeest and smaller ones in Almere and Ens. In Friesland it is mainly located near Berlicum, in Zeeland there is greenhouse farming on Schouwen-Duiveland, Zuid-Beveland and Zeeuws-Vlaanderen. 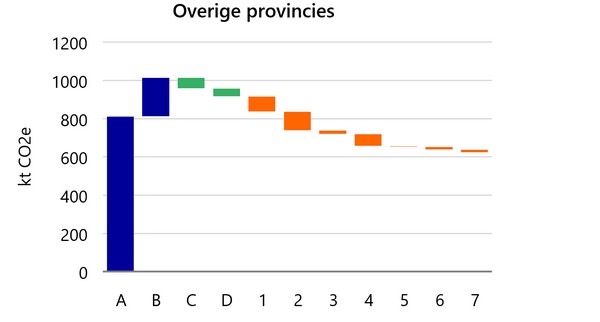 Results and limitations
The results give a very mixed picture of CO2 reduction potential up to 2030. The potential for CO2 reduction is much greater in highly concentrated areas with opportunities for geothermal heating than in areas with more scattered greenhouse farms and solitary glasshouses. If high energy prices for fossil fuels persist in the coming years or if government measures for CO2 pricing are introduced, this will influence the competitive position of regional greenhouse horticulture clusters: where will you build, in which companies is it interesting to invest, what is the financial feasibility of companies in clusters with limited sustainability opportunities?

The analysis carried out provides points of departure but also has its limitations, according to the bank:

It is based on the assumption that the area of glasshouse horticulture in the Netherlands will remain unchanged. This may not be the case. An increase in production per m2 due to more LED lighting for particular crop results in extra production that the market cannot always absorb. As a result, the acreage of the crop concerned may decrease. Export opportunities and supermarket policy also play a role.
It is not (yet) possible to quantify the possibilities of realizing savings options in cooperation with non-agricultural companies or in combination with housing construction. The 30 Regional Energy Strategies do provide an indication of this, but certainly not a concrete picture of the possibilities for CO2 reductions from greenhouse horticulture clusters.
The modernity of the clusters varies widely. An extra screen, for example, is therefore not possible in all greenhouses. Restrictions may also apply to other investments.
Some glasshouse growing areas already have a claim under the Municipalities (Preferential Rights) Act. This may mean a delay in CO2 reduction in the glasshouse areas there because there is a great deal of uncertainty among entrepreneurs about whether and when the municipality will make use of its right of first refusal.

Read the entire study here, in which the bank also proposes an approach for the sector at the company, sector, and area level.