More and more people in the tomato chain are saying that local cultivation is the future. After all, consumers and supermarkets want produce from nearby. How different that is in the desert of the United Arab Emirates. Traditionally, people there have relied on imported products and Dutch tomatoes, among other things, have a good reputation. Local growers, therefore, have a tough job getting consumers and supermarkets to choose local products. A striking contrast with the situation in the Netherlands, for example, became apparent during the recently held Global Tomato Congress. 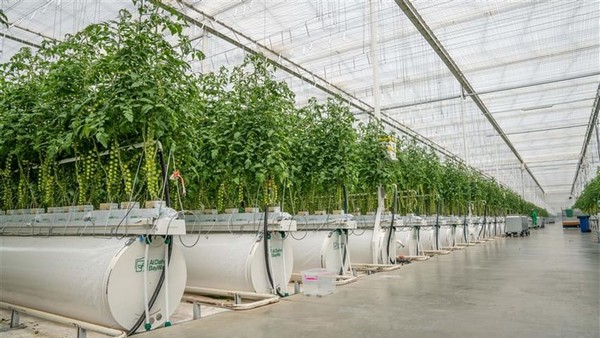 View into the greenhouse in Al-Ain

These are tomatoes from a high-tech greenhouse of Dutch manufacture. The greenhouse is located in Al-Ain and belongs to Al Dahra BayWa*. It is a cultivation project set up by the German fresh produce giant BayWa AG and the Abu-Dhabi-based company Al Dahra Holding LLC. Together they have built almost 12 hectares of greenhouse, of which about 11 hectares are used for growing tomatoes and 1 hectare for their own cultivation.

*In the week after the Global Tomato Congress, BayWa announced that it had sold the greenhouse to Pure Harvest Smart Farms.

Import dependence
Dominik Hartl, financial director of BayWa Global Produce, explained at the congress why they started growing in the desert. It was precisely this import dependence that offered opportunities, they said. The existing domestic cultivation in the country generally produced products of lower quality. There is enough energy in the sun-drenched country, and labor costs are low. Moreover, the government is strongly committed to self-sufficiency.

Complete package of tomatoes
Ten varieties of tomatoes are grown in the greenhouse, a complete package of snack, cherry, vine, beef, and roma tomatoes. "That is important in order to meet the wishes of the retail sector. If you only have one or two varieties, the supermarket still has to look elsewhere for the rest," Dominik said.

Al Dahra BayWa is also testing many new varieties, where it is a challenge to grow them, even in a high-tech greenhouse, in the desert area. "So far, we have seen that especially the smaller varieties do well here, better than the larger varieties of tomatoes. Varieties that work in Europe often do not work here. Sometimes they do, which comes as a surprise to us."

Convincing consumers
The greenhouse tomatoes are sold by the growers in their own country. The focus is on the premium segment, which is currently still heavily dependent on imports from both Northwest Europe and North Africa. "By supplying the top end of the market, we think we can achieve a margin. Our quality is good and (almost) equal to that of imports. In addition, we have the advantage of local cultivation, as a result of which our product can be on the shelves very quickly, more quickly than import products that have to make a long journey."

Despite that advantage and the good quality, local consumers and supermarkets are having to get used to the new tomato range. "It took time for consumers to understand that local product is not necessarily of lower quality. People were used to that. In the meantime, we have proven that it does not have to be that way." Supermarkets also had to be convinced and still do. "They are still not always prepared to pay the same price for our high-quality tomatoes as the price paid for imports from the Netherlands."

Other crops
There are still no real ambitions to export outside the UAE. However, they are cautiously looking at neighboring countries. "More as a plan B. Exporting to Saudi Arabia or Oman could be an option." There is also room for growth in home cultivation, although Dominik sees that the tomato market is "already quite full." "We started with tomatoes because we saw the greatest opportunities for achieving good sales here. Now we are also looking at leafy crops, among other things."

At the conference, he was also asked whether the energy crisis is affecting growers. Yes, but in a different way. "With temperatures of over forty degrees Celsius, cooling is particularly necessary. We can grow 365 days a year without lighting. Yet energy prices are rising for us too, although not as fast as elsewhere."

Another challenge of growing in a non-typical horticultural region lies at the organizational level. "Much of the knowledge still comes from the Netherlands. And not just in terms of cultivation. We work with Dutch growers, but we have also built up our own maintenance team here. There are ten of us, which can carry out repairs, so that if we have problems with our refrigeration system, for example, we do not have to wait for people from the Netherlands to fly in."