France: looking back on the trade mission covered crops

From 15 to 18 March 2022, the agriculture office of the Dutch embassy in France organized a trade mission to Western France at the request of the Rijksdienst voor Ondernemend Nederland, in cooperation with PSPS Business Abroad. The Netherlands is already well represented in this mature market with suppliers in greenhouse construction, vegetable, fruit and ornamental plant production. But there is room for more intensive cooperation between France and the Netherlands in this area, according to Greenports Netherlands and the French innovation cluster for horticulture Vegepolys Valley.

On the day of arrival in the city of Angers, the delegation of twelve Dutch companies and experts was officially welcomed by representatives of the Pays de la Loire region and the Vegepolys Valley innovation cluster, along with other international delegations.

Vegepolys Valley is a French innovation cluster for horticulture and as such an important partner in the trade fair SIVAL, which takes place annually in Angers. The French cluster signed an MoU with Greenport West-Holland in 2019 to strengthen bilateral cooperation to accelerate innovation in horticulture and to generate joint projects in a national or EU context. 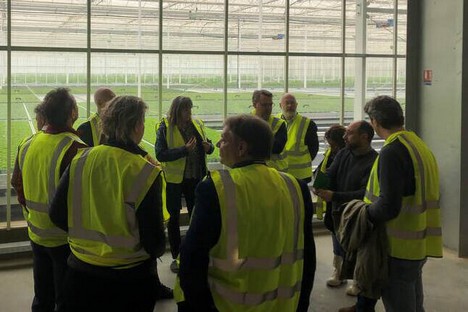 SIVAL trade show attendance and matchmaking
According to the exhibitors, the international horticultural trade fair SIVAL was less well attended than in previous years because the fair was moved from January to March on account of corona. This is a particularly busy month for many producers in the fields and in the greenhouses. But this could not affect the quality of the fair and it is said that good contacts were made and business was done as in previous years. The stands were a little quieter, which made it easier to have conversations on the show floor.

There was also the opportunity to make appointments for one-on-one meetings with companies in the International Corner at the fair, through the B2Match appointment system of the Vegepolys Valley International Business Event (VIBE).

Company and site visits illustrate market opportunities in France
On the third day of the trade trip, three company visits were made. The group was warmly welcomed at the cooperative cultivation company Jardins de Loire. Then they visited the very modern greenhouses of Bioplants, where a more intensive form of production of organic and sustainable aromatic herbs takes place. Then the trip went a little further into the region, to the traditional ornamental plant grower Jarry.

On the fourth and final day, Vegepolys Valley gave a tour of the Campus du Végétal. This plant campus brings together on one site in Angers many public and private players from the horticulture (vegetable, fruit and ornamental) and seed sectors. Research institutions INRAE, the Institut Agro and Vegepolys Valley are the main partners of this project.

Distances are great in a country like France and the duration of the trade mission was unfortunately limited. These company and site visits were obviously not enough to give an all-encompassing picture of the sector, but they gave an interesting look into the kitchen of French covered crops.

Where are the challenges? Are there market opportunities? How and with whom can Dutch entrepreneurs collaborate? Perhaps this will taste like more...

Looking to the future
How can this dynamic be maintained and capitalized on? It goes without saying that newly acquired contacts and meetings with existing relations need to be followed up and kept "warm". Investing in relationships is a must in France to be able to do business, as became clear during various discussions. Making contact is one thing, but building a business relationship requires sustained investment in terms of time and energy.

The will on the French side is there. That was clear from the various receptions of this Dutch delegation in the Pays de la Loire region.

Moreover, the French competitiveness cluster Vegepolys Valley would like to pay a return visit to the Netherlands with a French delegation soon. A great opportunity to further strengthen ties. Besides the Greenports, individual companies can of course also play a role in this and in turn open up their sites to receive French entrepreneurs and experts.