Inflation remained the big story for fresh produce in February 2022

The U.S. consumer price index increased +7.9 percent for the 12 months ending February 2022. This was the largest 12-month increase since July 1981, according to the Bureau of Labor Statistics. IRI-measured multi-outlet stores in the U.S., including supermarkets, club, mass, supercenter, drug, military, and other retail food stores, also showed continued grocery price inflation over the elevated 2020 and 2021 levels.

In February 2022, the average price per unit across all foods and beverages was up +10.3 percent versus the same weeks in 2021 and +16.8 percent versus February 2020. For the latest 52 weeks ending February 27, 2022, prices increased +6.0 percent — the annualized number pulled down by much milder inflation in the second quarter of 2021. “In our February IRI shopper survey, we found 90 percent of shoppers have noticed price increases across the various grocery departments and a whopping 96 percent of those consumers are concerned about it,” said Jonna Parker, team lead for IRI. “In response, 75 percent of consumers have already made one or more changes to their grocery shopping. Additionally, consumers are pulling back on restaurant visits. This is not so much because of COVID-19, but as a means to save.” 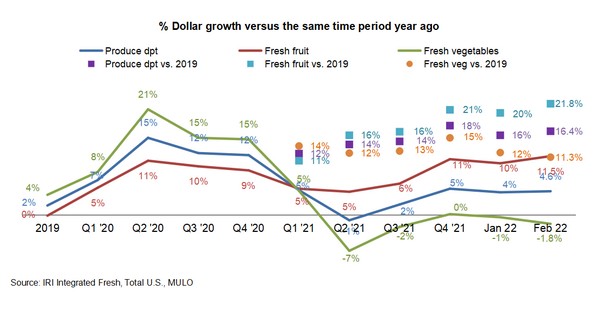 Fresh produce prices are also up from last year at a slightly higher rate than total food and beverages. In February 2022, the price per pound for total fresh produce increased by +10.9 percent over February 2021. Fresh vegetable inflation was far below average, at +6.2 in February, contrary to fruit that reached its highest levels seen yet, at +16.1 percent.

The February 2022 share of dollars for fresh produce was 79.9 percent, two points below its typical levels despite above-average inflation.  As a share of total volume sold across frozen, center store and fresh, fresh produce made up 77.4 percent.

“On fruit, we had some shifts in the top 10 sellers in February,” said Parker. “While berries continued dominating the top 10, grapes moved in third and avocados moved up to fifth. Pineapples replaced lemons as the 10th largest seller this month.” 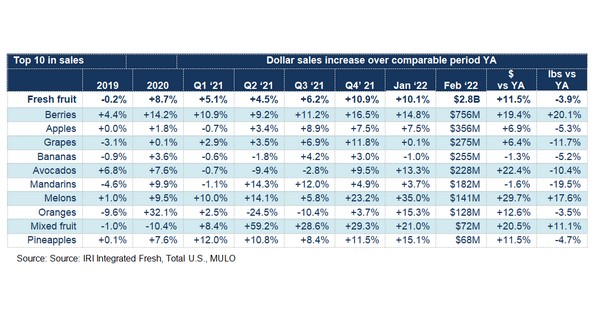 “The top 10 sellers on vegetables had a mixed performance but have been very consistent in makeup,” said Joe Watson, VP, retail, foodservice & wholesale for IFPA. “Pound sales versus a year ago were down across the board, with onions coming closest to year-ago levels.”

The next report will be released mid-April. Please click here for the full current report. In addition to the data provided here, the IFPA now offers InSite – an online interactive data set covering produce/floral performance.