Will Teeuwen, Teboza: "This year, we're going to keep expanding our European acreage"

In the Netherlands, the asparagus season has begun for Teboza and its customers. The first greenhouse asparagus have been harvested and are now available at Teboza. "The supply will be limited in the coming weeks. However, the quality is excellent," says Will Teeuwen.

"We started early last year. That went so well; we decided that once the festive season is well and truly over, we'd like to offer our clients fresh, Dutch asparagus. We're selling these first asparagus mainly to eateries in Belgium and Scandinavia. There aren't yet large volumes, but that will increase from now on."

"[Due to the lockdown,] we're currently largely missing out on the Dutch hospitality industry buyers. But, over the last two years, our retail customers have made up that loss. Asparagus is still considered a luxury product. And consumers are now more likely to prepare it at home," Will continues. 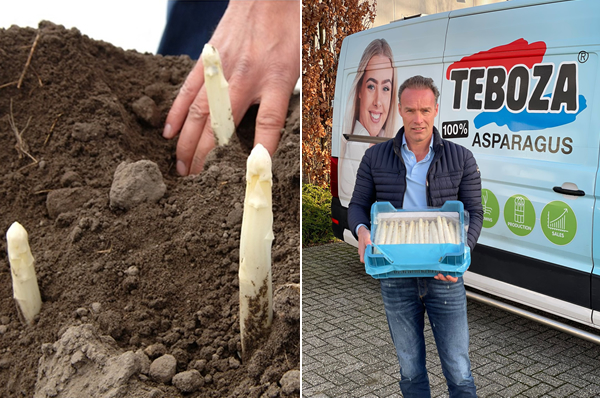 "We expect the season to be good. Only 20% of the fields still need to be prepared. That puts us ahead of schedule in preparing the beds. We'll begin heating the outdoor crop from late January. We'll harvest those from early/mid-March. There will be fewer forced volumes in the Netherlands. That's because of the increased energy prices."

"Some growers can't cope with the current gas prices. And some have sold their contracts. We've deliberately opted not to do this. It's more important for us to provide for our customers than make a quick buck. But the rising costs remain a major challenge. These include packaging materials, transport, and personnel costs," explains Will.

Rather too little than too much
"From the end of March/beginning of April, we'll begin cold soil cultivation in mini tunnels. This crop developed well, despite the cool, not-very-sunny summer. How high production will ultimately be, is still a matter of speculation. But there doesn't seem to be more kgs. There isn't usually any price pressure."

"Of course, with 25°C temperatures in the spring, harvests could peak. But, there shouldn't normally be any issues in selling the supply. In fact, we expect too little supply rather than too much. In the Netherlands, the acreage is no longer increasing. In Europe, there's even a downward trend," says Teeuwen.

Cultivation in other European countries
Teboza, on the contrary, is expanding its acreage considerably, especially overseas. "This year, we're going to keep increasing that. We'll begin harvesting our asparagus in Spain in a fortnight. We've significantly expanded that crop. Our sorting and packaging methods in the Netherlands have recently really caught on in the local market. Our Dutch acreage, too, continues to grow."

"Our Belgian customers are asking for Belgian asparagus, so we're expanding that crop as well. We're also considering cultivation in other European countries to offer clients an alternative," says the asparagus grower. "That also applies to our organic acreage. We've been growing organic asparagus for 20 years. We've decided to exceed the European Commission's target of 25% organic acreage by 2030."

And this year, Teboza will again put the Sparter to work in its fields. This is Cerescon's selective asparagus harvesting robot. "Last year, we took the time to learn how to truly use this robot. It hasn't yet lived up to our expectations. The devil is in the details like detection technology and agility. But we strongly believe in crop automation. That's why we'll be working alongside AVL Motion's harvesting robot this year too. Then we can learn more from this technology," Will concludes.