Last autumn, a test was done with a 'standard' USDA organic cucumber crop in the greenhouses of cucumber grower Herman Keijzers. This was compared to a regular crop, which usually provides higher yields.

The test, which ended on 15 November, showed that VitalFluid's natural nitrogen can be used in the American organic industry, while it also results in 30-40% more production in the organic crop. Besides, the test showed the importance of using the right calcium source. Calcium is important to mix up with nitrate to get a good balance in a manure recipe. New knowledge was gained about this balance during the trial. 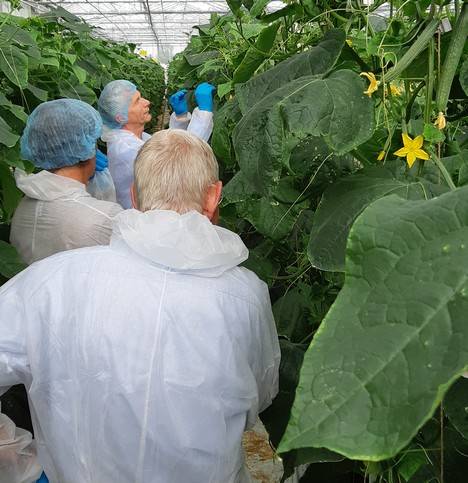 Trial design
The trial was set up in a greenhouse where the plants were grown on substrate. The nutrient water was recirculated through an irrigation system with drippers. In the greenhouse, six trial plots with six plants each were compared for nine weeks.

Three trial plots received a nutrient recipe with only VitalFluid Natural Nitrogen as the nitrate source. The reference trial was fed traditional nutrients, in which the nitrate source was calcium nitrate. One of the challenges with the trial in the VitalFluid fields was maintaining nitrate during calcium supplementation. The original calcium source did not react well with the nitrate, causing deficiencies. This was later solved by adding an alternative calcium source. This source reacts well with the VitalFluid Natural Nitrogen. 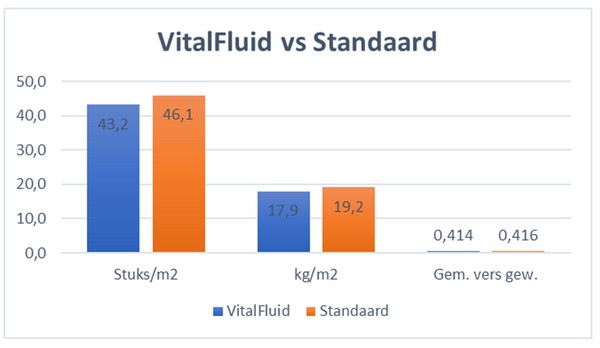 The figures show a dip in weeks 37 and 38. This is due to the fact that the growth of the tendrils has lagged behind during the production of the stem cucumbers because of the nitrate deficiency in this period caused by a reaction from the use of an incorrect calcium source. When the correct source of calcium is used, this dip will not occur, VitalFluid is convinced. 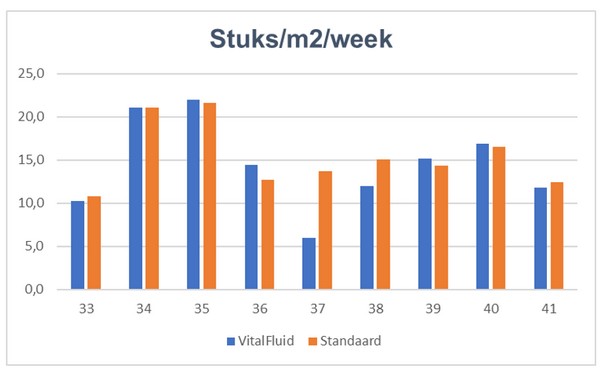