An internship on the future of autonomous cultivation

'Next Generation Growing: Full Throttle' is a cultivation method that has been trying to gain a foothold in the Netherlands for twelve years now. Inholland is one of the partners in this project, which means, in concrete terms, that the students of the Horticulture & Agribusiness study program of Inholland University of Applied Sciences in Delft gain more theoretical knowledge about various cultivation approaches. 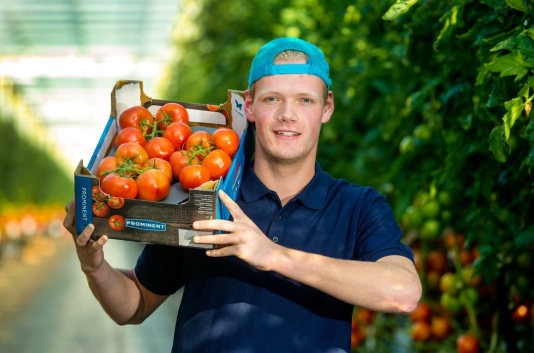 Autonomous cultivation is now included in this project as well. The greenhouse horticulture sector is undergoing a digital transformation, in which data and artificial intelligence are playing a more significant role. For his graduation research, recently graduated cultivation student Jelmker Keemink looked into the implementation possibilities of autonomous cultivation in commercial tomato cultivation. At the moment he is working on his practical development as a cultivation specialist at Schenkeveld, the company where he graduated.

Jelmer explains that autonomous cultivation is a great way to help younger growers in particular with optimal cultivation decisions without having the necessary experience. "The application of autonomous cultivation must make it possible to continuously make the right decision. Furthermore, the decision support and autonomous control should allow the grower to control larger areas." The application of AI in the horticultural sector should lead to experience, or having 'green fingers', becoming less important.

Optimizing cultivation
Jelmer has spoken to many crop specialists about autonomous cultivation. They see opportunities in an autonomous system because it offers the possibility to continuously monitor the cultivation and to make early adjustments when changes in circumstances occur or are predicted.

"At the moment, various parties are busy developing autonomous cultivation systems. This includes the vision that they are trying to optimize cultivation by allowing an autonomous system to fulfill various long-term objectives."

Under embargo
The graduation assignment was not always easy. "It was a big assignment and I was not familiar with this subject previously. I was therefore very pleased that I was able to conduct many interviews on this subject through my personal network."

Jelmer also had a hard time with this assignment at times, because some parties could not always release all the information; a lot was embargoed. "Many of my findings could not be shared. You sometimes had to really try your best to get the right information out of someone."

Future in cultivation
Jelmer is currently working within his graduation company Schenkeveld. He is now working on his practical development into a cultivation specialist. "The project of autonomous cultivation is temporarily on the back burner at Schenkeveld, but I expect it will be taken up in the future.