Just like early last year, greenhouse builder Bosman Van Zaal recently celebrated reaching the highest point of a new greenhouse for Wageningen University & Research in Wageningen. The WUR is busy renovating its complex; after 'Serre Red', the NPEC greenhouse followed, and now it is an insect greenhouse's turn.

Insect greenhouse
The third greenhouse in the series will be used by WUR's Unifarm trial company for scientific insect research and education on plants. It is a turnkey insect greenhouse. The (PKb-I and PKM-II) research greenhouse, where research will be done on insects on plants, consists of a Venlo greenhouse with a total surface area of 792 m2 and 22 cultivation sections (compartments). The insect greenhouse has been designed by Unifarm in collaboration with DLV.

At the end of January 2021, Bosman Van Zaal started with the engineering of the turnkey insect greenhouse, and construction started at the end of June. All growing departments are air-conditioned with their own recirculation air treatment unit (AHU). This means that a different climate can be created in each department by heating, cooling, or dehumidifying the air in the AHU. 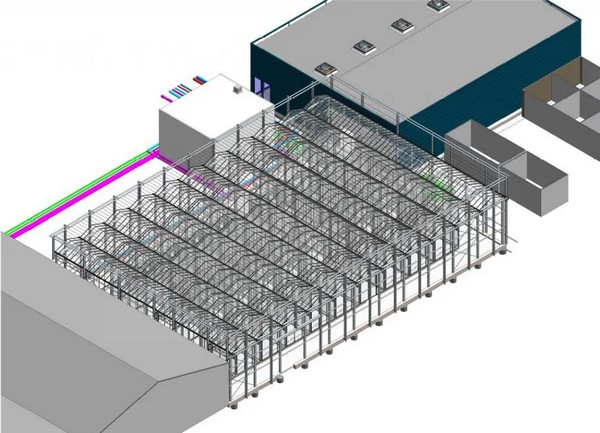 A 3D drawing of the new insect greenhouse

No natural gas
The entire water installation and electrical systems are also realized by Bosman Van Zaal, and all heat and cold energy is supplied from Energia, which is connected to the heat and cold storage ring pipeline of the campus. No natural gas is used to heat the greenhouse in the winter; instead, this is done by means of heat pumps. The cold that is produced during this process is stored in the heat and cold storage ring pipeline and is used to cool the greenhouse in the summer. Finally, a Hoogendoorn IIVO computer extension is installed. The expected completion date of the insect greenhouse is mid-December 2021.