The Primeurs train is back at Rungis Market after being out of service for two years. After several months of work, carried out collectively by the Rungis Market teams and the State services, the greengrocers' train is making a comeback. Coming from Perpignan, the first train arrived in Rungis at 3 a.m. on Friday night. 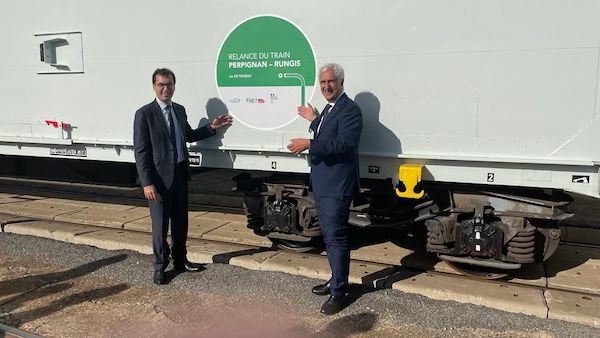 Being the fastest goods train in Europe with an average speed of 140 km/h, the Perpignan-Rungis will transport 10% of the Market's daily flow of fruit and vegetables. The line is a real economic development tool for the food industry and the regions of Ile-de-France and Occitania.

The takeover of this line is a further step towards the implementation of carbon-free logistics. A consultation will be launched to develop a combined transport terminal by 2024, which will make it possible to increase the share of rail in Rungis Market's supplies to 20% and avoid nearly 60,000 trucks per year on the roads. In the future, Rungis Market will continue the work undertaken with the various players to encourage an increase the number of rail links to and from Rungis.

"I would like to thank the Prime Minister and the Minister of Transport for their commitment, the Primever Company, without which this line could not have been restarted, and the Market's wholesalers, who are the economic players in the field. The railway infrastructure will contribute to the development of the country's food sovereignty, by efficiently connecting our production areas with the immense consumption basin of the Ile-de-France region and beyond. This is the future of the French fresh produce supply model that we are building," declared Stéphane Layani, President of Rungis Market. Rungis International Market has been served by rail links since it opened in 1969.