A proposal by Consorzi Agrari d'Italia for a green revolution

Robotic weed control is a reality

Mechanical weeding carried out automatically, without an operator, with a margin of error of 1.5 cm. Its name is Dino, and it is a reality, not a prototype. It can be purchased from the Italian agricultural consortia Consorzi Agrari d'Italia (Cai), and a practical demonstration was held on Wednesday 22 September in Castenaso, in the province of Bologna.

"We made available to Italian farms this innovation that provides significant benefits in both terms of product costs and respect for the environment," explained the commercial manager of Cai, Ivan Cremonini. Consorzi Agrari d'Italia has been confirmed to be a reference point for the supply of technologies and services for precision agriculture.

Cai technician Marco Zambelli explains some details. "It is a robot, which I would define rover for its characteristics, with four electric motors, which thanks to satellite tracking can move independently in the fields of horticulture to mechanically weed the crops. The operating tool is a weeder with hoes and rotating blades that act between the rows, but we can also add a system of retractable knives to work on the row".

In Castenaso, the demonstration field used lettuce cultivation, but Dino can be applied to all or almost all vegetable crops.

At the moment, the autonomy is 8 hours, which can be doubled if you take an additional set of batteries. The machine is already available and, to be economically viable, technicians have calculated that an area of 20-30 hectares is needed. It could be purchased by a network of companies, for example. 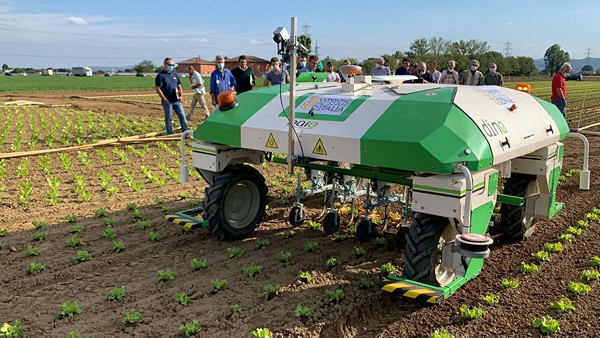 "Thanks to new production models based on Agriculture 4.0, you can reduce expenses by 50%," added Zambelli.

"This is a cultural revolution conceived by a French startup," reads a note from Cai, " and available by agreement with the company Agrico. It is proof of the intense research activity of advanced technologies, carried out all over the world by Consorzi Agrari d'Italia, with the aim of bringing greater efficiency and sustainability to production processes in agriculture.