Around one hundred plant growers and related companies from the Netherlands and, at long last, abroad gathered this week during the annual International Propagation Seminar. Over two days, visitors are given the opportunity to catch up, share knowledge, and today also to take a look behind the scenes at a few Dutch companies.

Yesterday the knowledge and networking event, organized by Flier Systems, Grodan, and Propagation Solutions, opened with an afternoon of lectures on various topics, but with the common thread: growing better and more sustainable young vegetable plants. 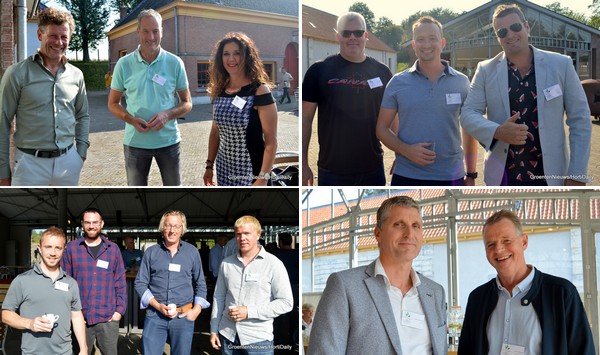 An (inter)national crowd had gathered in Bodegraven. View the photo report here.

Vertical farming
After a short introductory talk by Hans van Herk of Propagation Solutions and a round of introductions by all those present from the organizing companies Flier Systems and Grodan, it was Ted Duijvestijn's turn to kick off the lecture part of the event. Ted discussed the state of affairs at his company, showed the world-famous Netflix film, and also brought up the topic of vertical farming. Does it have a future for plant breeders? Ted is convinced that it does, and not just for growing tomatoes or tomato plants, but also for growing in challenging climates.

No crop protection products, lighting instead
That's when lighting comes into play. Like many production growers, plant breeders also use lighting. Following the example of these production growers, plant breeders are also experimenting with LED lighting in hybrid or even 100% form. At Gipmans Planten, they opted for hybrid lighting in 2017, explained Sales Manager Marcel Janssen, assisted by Grower R&D Frank Huijs from the audience. Perhaps the most important reason for this step was the desire to grow without crop protection agents. In 8000 square meters of greenhouse, there is a 50-50 ratio of HPS and LED, good for 100 micromols.

One year later, the investment in 18 LED climate cells followed. Here good for 300 micromols. The grower is seeing good results in both peppers and cucumbers. In sweet pepper, the growers see a stable germination, and they expect to be able to transplant the plugs to the blocks in time automatically because the young plants are much more suitable for this now. Cucumber growers have noticed that they can produce a stable plant all year round and can also supply it well in that manner.

Tomatoes proved more difficult. Cultivation in the LED cell had no (positive) effect on germination, and the first truss appeared to develop too high in the plant. The grower has, therefore, temporarily stopped growing tomatoes in an LED cell.

100% LED above fruiting vegetables
As a change from the lectures, the audience was shown a video after Marcel's presentation. In it, German plant grower Achim Gernert of Jungpflanze Gernert told of the step he took in 2019 to start growing vegetable plants under 100% LED in a new 2-hectare greenhouse. According to Hans van Herk, who moderated the lectures and also hosted the video in Achim's greenhouse, this was unique worldwide.

The plant breeder was positive, both in the video and during a question round in the audience. His feeling is that growing under 100% LED lighting is going well. For him, the energy savings that he is able to make are certainly also a factor. However, the investment costs are higher than for HPS. Reason enough for the plant grower to opt for hybrid lighting for a new lighting step in a 1.8-hectare greenhouse.

Biology and biostimulants
After a break, it was the turn of Marvin Koot and Arjo van Lenteren of Biobest to focus on biological pesticides in plant breeding, also literally in video images. Erik Jaspers of PlantoSys then explained the European legislation on biostimulants, followed by several success stories with biostimulants in the cultivation of cabbage and lettuce, among others. One of the successful substances turned out to be silicon, whereby Erik shared a tip for application in tomatoes, namely the use of nanobubble technology. In this way, even a tomato crop, which by nature absorbs silicon less easily, absorbs the substance well, resulting in firmer, tougher leaves that are less susceptible to biting and sucking pests. 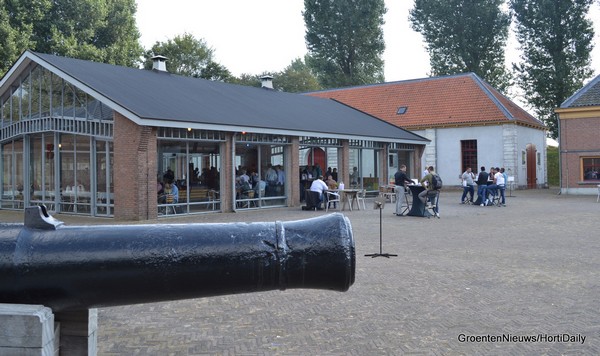 It was nice to catch up at the beautiful fortress

ToBRFV
Ines van Marrewijk of Groen Agro Control concluded the round of lectures. Those who had wandered off, especially with a strong autumn sun shining on their backs, did well to wake up again. Ines went into depth about the feared Tomato brown rugose fruit virus (ToBRFV). The virus is now present worldwide and is difficult to combat for the time being.

The virus specialist shared some tips with the audience about recognizing virus symptoms in young tomato plants at an early stage. She immediately remarked that to date, she herself had never seen any symptoms of ToBRFV in the cultivation of tomatoes, although, according to her, that could well be because the virus is so difficult to recognize.

Those present could only agree. After the last presentation, they prepared for dinner and will visit various Dutch companies in groups today.