On Sunday, September 12, the KAIROS Canada Migrant Justice team traveled to Leamington, Ontario, to celebrate Grito de Dolores or Mexico’s Independence Day. Hosted by the Migrant Worker Community Program, the event was an opportunity for migrant workers from the farms around Leamington to enjoy the summer evening, relax, listen to music, and, for Mexican workers, celebrate their heritage.

Migrant workers are a vital part of the Leamington community. Driving through the town, the team saw workers on every corner, biking down every street, getting groceries, banking, or spending an afternoon at the beach. The town felt alive with workers. 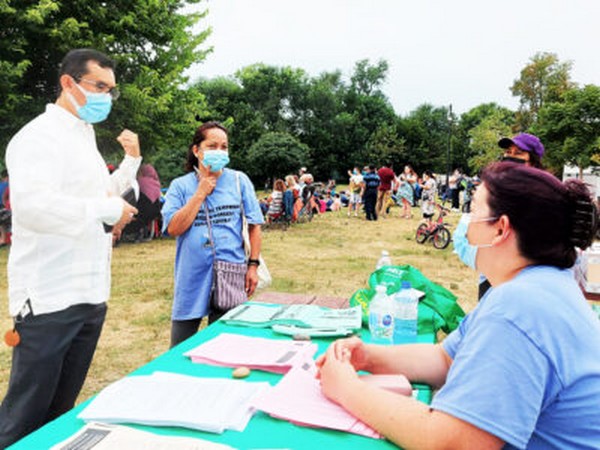 MWCP’s event was an opportunity for the town to show appreciation for all the workers do. For every massive field of crops and huge greenhouse in the area, there are many workers who make the growing and harvesting of crops possible. They are doing critical but often invisible work. Through the event programming, Martin and the MWCP team wanted the workers to know that they are a valued part of the community. It was gratifying to be able to publicly recognize this work for the thousand workers, supporters, and allies who gathered to partake in the event. Through it, KAIROS was able to connect and provide resources to more than 250 migrant workers.

During their time in Leamington, KAIROS also had an impromptu meeting with the Philippine Consul General Orontes V. Castro. By chance, he was in Leamington for a dual citizenship ceremony. We were able to discuss the issue of accreditation of training and education of temporary foreign workers, especially in the healthcare field, and how to best support care workers coming to Canada at this difficult time. It was a fruitful discussion about how best KAIROS and the Philippine Consulate can support workers and the potential for collaboration.