Poland is a significant fruit and vegetable producer. Belarus remains the country's number one buyer. Poland is the Netherlands' fourth-largest buyer. But, it is also a net importing country.

In the past year, Poland imported 2.5 million tons of fresh fruit and vegetables. It exported 1.7 million tons. This makes Poland the tenth-largest importing country worldwide. It takes the 19th spot as an exporter. That is according to a Fruit&Vegetable Facts analysis.

Last year, Poland exported much less than previously. That was mainly due to the reduced export of its main product, apples. They also sold less of their second most important wholesale export product, mushrooms. Belarus has been the top Polish fresh fruit and vegetable buyer, by far, for years.

Lots of apples, large full-soil vegetables, greenhouse vegetables
As mentioned, Poland is a large producer. Annually, it produces five million fruits and 5.5 million vegetables. This is the year-on-year production average. It grows three million tons of apples. So, that product is, by far, the most important fruit product. A third of these are industrial apples.

Other fruits are strawberries and sweet and sour cherries. Raspberries, blackcurrants, plums, and pears are included too. Blueberry cultivation is also on the rise in Poland. By now, the country is producing 40,000 tons of these.

The top Polish vegetables are a combination of large full soil vegetables - such as cabbage, carrots, and onions - and protected cultivation, like tomatoes and cucumber. Poland grows almost 700,000 tons of tomatoes and 140,000 tons of bell peppers under cover. In the Netherlands, that is 900,000 tons and 430,000 tons, respectively. 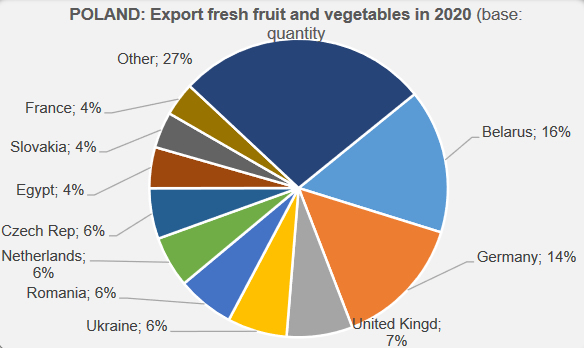 Poland cultivates the most raspberries in the European Union. And the fifth-most in the world. It accounts for more than half of total EU production. From 2004 to 2006, Polish raspberry production averaged about 58,000 tons. The total production area during that period was about 16,000 ha.

By 2016, production had grown to 129,000 tons, and the cultivation area to 29,300 ha. Poland's raspberry acreage is fairly stable. However, the harvest varies from year to year. That is due to changing weather conditions. 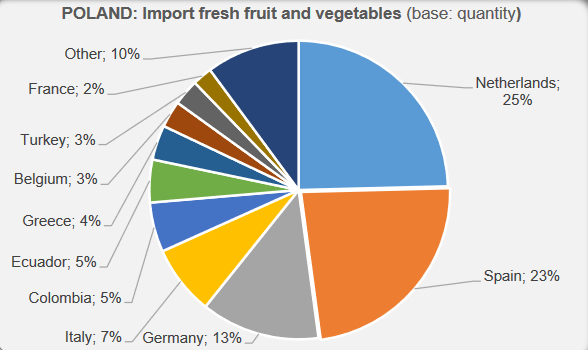 The Netherlands is a top supplier; particularly re-export
In 2020, Poland imported as much fresh fruit and vegetables as in 2019 - 2.5 million tons. It was more than the years before, though. Bananas were, by far, the most important product. Last year, Poland imported 560,000 tons of these. In the three previous years, it was 450,000 tons.

That fell considerably in early 2021. Tomatoes, watermelons, mandarins, oranges, and onions followed. Imports from the Netherlands consist largely of re-export. Bananas are the top product that ends up in Poland. That is from (via) the Netherlands.

Last year, according to Eurostat, that involved a re-export of over 130,000 tons. Onions are the second most important product. Poland imported 122,000 tons from the Netherlands in 2020. Tomatoes, pears, oranges, lemons, carrots, and grapes from the Netherlands follow. As do many other products.

In total, 25% of all of Poland's imports come from/via the Netherlands. That is to say, 610,000 tons. The Netherlands exported 130,000 tons of locally-grown fresh vegetables and fruits to Poland last year. So says the Dutch Quality Control Bureau and the Fresh Produce Center. 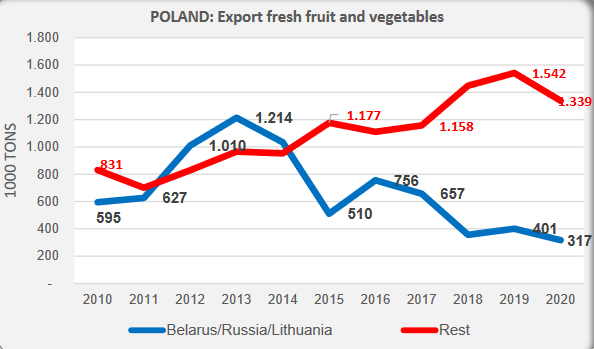 Export countries
Russia used to be a tremendously important sales market for Poland. At its peak in 2013, Poland exported 1.2 million tons of fresh fruits and vegetables there. That included Belarus and Lithuania. Last year, that was only 317,00 tons. Here, Belarus was still vital, with exports of 262,000 tons. Germany buys the second-most Polish produce. In 2020, it took 240,000 tons. This was more than in 2019 but less than in 2018.

Export: mostly apples
Polish exports rely heavily on apples. With 645,000 tons, this product represents almost 40% of total fresh fruit and vegetable exports. After Belarus, Egypt is the second-largest buyer of Polish apples. In 2020, they took 75,000 tons, and in 2019 almost 130,000 tons. 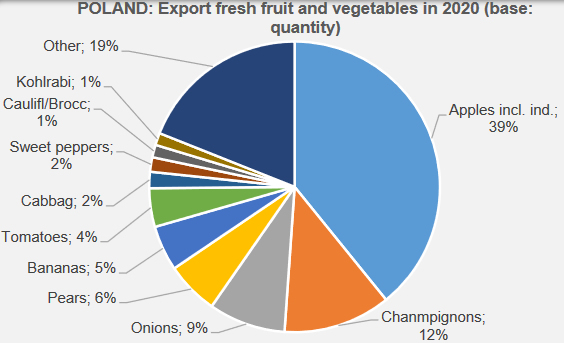 Germany is the other major Polish mushrooms buyer. France is at number three. And, far behind, a string of other countries follows. Poland exports quite a lot of onions. In 2020, it was 211,000 tons. Of this, 60,000 tons went to the United Kingdom, and 57,000 tons to the Netherlands. Polish pear exports amounted to almost 100,000 tons. Most went to Belarus. At the beginning of this year, exports of Polish pears to that country again increased.