"Coatings are an absolute necessity for cultivation in Alberta"

Big Marble Farms supplies a significant portion of the Canadian Prairie Provinces with fresh vegetables. A remarkable accomplishment because greenhouse cultivation in the harsh climate here is a real challenge. Coatings on the greenhouse roof are an absolute requirement for success.

When asked what would happen if you were to forego the use of coatings, Ryan Cramer, CEO of Big Marble Farms, smiles. “That’s entirely impossible. Not using any coatings is not an option. It would be detrimental. We have been using coatings from the very beginning.” The company in Medicine Hat was founded some twelve years ago. Ryan has a partnership with his father and uncle. The company is experiencing significant growth. It was drastically expanded last year and now has 55 acres of glass. 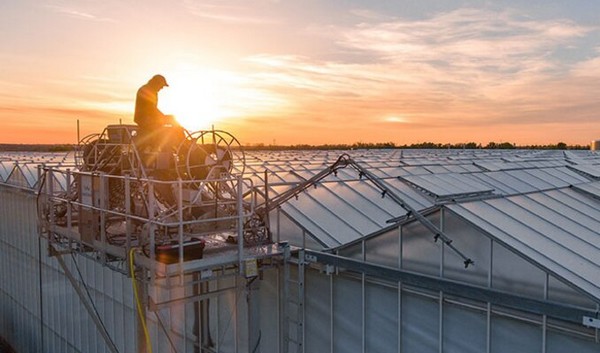 “We grow tomatoes and cucumbers, and in addition, we sell products grown by colleagues, such as sweet peppers, lettuce, and eggplant. These are destined for the domestic market, which, in addition to Alberta, includes Manitoba and Saskatchewan. We can sell the vegetables as local products in the Prairie Provinces,” he says.

Year-round cultivation
The company was the first in the region to install assimilation lighting. That makes year-round cultivation possible. The prairie climate is a real challenge in this respect. “We are growing our crops in a semi-dessert: little rain and extreme temperatures of up to 40°C in summer and down to -40°C in winter. Furthermore, temperatures are highly variable, they can go up as high as +12°C in winter. This means that we constantly need to be flexible in responding to these conditions.”
Frost forms on the windows in winter. This is above the energy screen and in itself is not necessarily a problem. However, the ice melts at some point, and the dripping water then becomes a challenge. 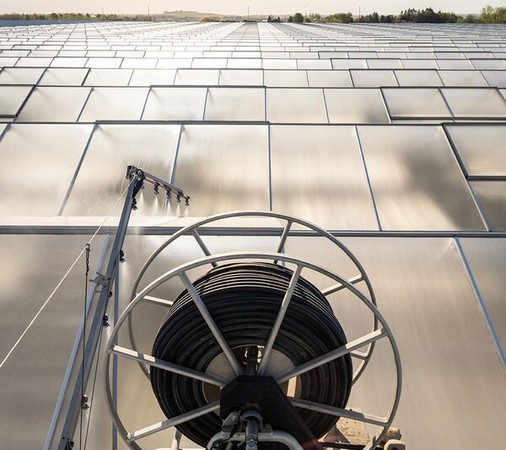 Early coating
“After the severe winter, temperatures can go back up to 30°C, starting in May; this means we have to apply coatings early in the year. We consider outside temperatures up to 35°C manageable. The temperature inside the greenhouse would then be about 28°C. But above 35°C, things become difficult. The 24-hour temperature would then rise too much, which causes setting problems and smaller than desirable leaves,” he says. But the company is well-prepared. The combination of coatings, a misting system, and an energy screen makes it possible to effectively manage the greenhouse climate.

Big Marble Farms has always used coatings. “In the past, it was ReduSol. While this was not bad, it still took away too much light. When ReduHeat and ReduFuse became available on the market, we started experimenting ourselves. We prepared a mix of the two coatings to get the right result. When ReduFuse IR was introduced, this was no longer necessary. It’s a really good coating. Tailor-made. It cuts the harmful rays and diffuses the light. It’s the best of both worlds.”

He applies this coating on greenhouse sections with standard glass. However, some 40 acres are now covered with diffuse glass. ReduHeat is used here. 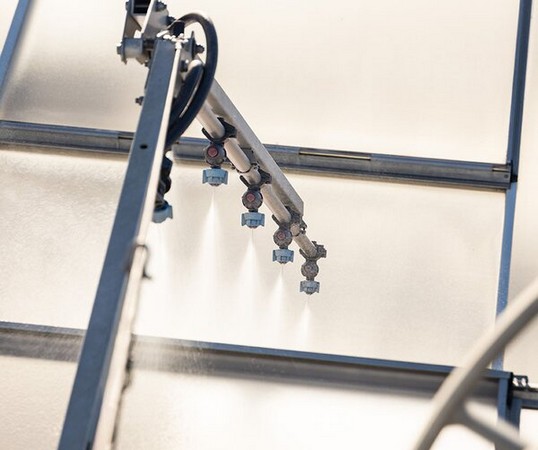 Fine-tuning
“We are constantly fine-tuning our operations. We like to apply a thin layer in April, about 50% of the normal concentration. This is because we aim for as much light as possible. Before the heat of summer, we top it up.”

Aside from the heat, the prairie climate’s extremely low humidity also affects the crops. Sometimes the relative humidity is only 10% – the greenhouse crops are barely able to handle such conditions. But Ryan takes good care of his plants. “We can manage,” he says. “The coatings bring the temperature down. Misting creates a good climate, and curtains are in place to handle extreme situations and to protect the young plants in August/September.” This way, the company grows tasty, healthy vegetables for the entire region.