Growing berries under solar modules instead of polytunnels

Insolight and its partners Romande Energie and Agroscope will be building a solar installation on Agroscope’s Conthey site in the canton of Valais with the aim of testing a new agrivoltaic solution (insolagrin). This pilot project was supported by the Swiss Federal Office of Energy (OFEN). The insolation solution, which proposes the replacement of the protective tunnels used in farming, combines agriculture with the production of renewable energy.

At the same time, the pilot project aims to measure the potentially positive impact of the installation on agricultural yield whilst ensuring satisfactory energy production. Significant results would pave the way for unprecedented solar deployment, with no additional footprint on the land. 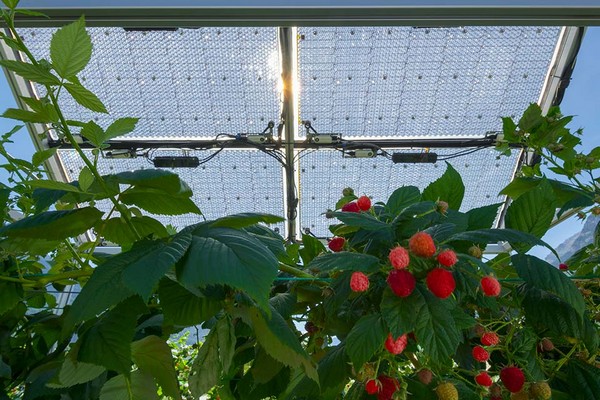 When aligned, the optical system can generate energy (E-MODE), but it is also possible to unalign it to ‘leak’ the light (MLT-MODE). The solar modules, therefore, act like a ‘smart’ shade adjusting the amount of light they let through. They enable the optimization of plant photosynthesis over the seasons and help reduce the negative impact of hot summer temperatures on the yield and quality of agricultural products, whilst recovering the remainder of the light in the form of electricity.

From July 2021, these solar modules will be installed over strawberry and raspberry crops at Agroscope’s experimental center in Conthey as replacements for protective polytunnels. Bringing together members from Insolight, Romande Energie, and Agroscope, the project team aims to demonstrate that it is possible to efficiently combine agricultural production and electricity generation on the same site, using a dual-purpose agricultural and photovoltaic structure. The results collected will also help to assess the cost-efficiency of this type of installation and to clarify its financial prospects. The solution backed by the Swiss Federal Office of Energy (OFEN) will be tested for four years on a surface area of 165m2, designed to provide meaningful results allowing future large-scale deployments to be planned.

“The cultivation of berries and small fruits under cover allows fruit yields and quality to be improved whilst reducing pressure from a majority of fungal diseases. This agrivoltaic structure was created with the aim of replacing and improving the protective and shading functions of the umbrella tunnels we use over strawberry and raspberry crops, without obstructing agricultural activity," said Bastien Christ, Head of the ‘Berries and Medicinal Plants’ Research Group at Agroscope.

New prospects for the berry sector and solar energy
Switzerland’s energy strategy envisages achieving carbon neutrality by 2050. Swissolar considers a massive expansion of solar energy to be the only solution for achieving these objectives. It is estimated that at least 1.5 GWp will have to be added per year (30 GWp by 2050), i.e. four to five times the level of the current deployment. Combining solar energy generation with the agricultural use of land, agrivoltaics represents a burgeoning trend in Europe that could take off in Switzerland if the pilot project confirms the expectations of its promoters.

Insolight’s new-generation photovoltaic technology differs from conventional opaque rooftop solar panels. Their solution becomes an agricultural tool for the benefit of plants: “Dynamically adjusting the light transmitted to the plants paves the way for increased protection from climate variations and possible increases in crop yields thanks to the matching of the light to the needs of the plants and the lowering of the temperature during heat waves via the shading effect” explained Mr. Christ. Through its focus on crops requiring protective structures (polytunnels or greenhouses), the insolagrin solar installation does double duty by replacing these existing structures. It also allows users to avoid the use of plastics and to optimize land use.

“If the results obtained are significant, this innovation could have great potential. Replacing existing structures with solar structures in agricultural areas would complement rooftop solar deployment, and thus hasten the pace of decarbonization in Switzerland," said Martial Genolet, Photovoltaic Business Manager at Romande Energie.
The insolagrin solution could ultimately lead to an economic gain, thanks to its simultaneous optimization of agricultural production and energy generation.