Germany: New 'supermarket of the future' has a greenhouse on top

What will the shopping centre of the future look like? How do you build sustainably? According to REWE, it is one with a greenhouse on top. Last Friday, the German retail giant opened their first Green Farming pilot store in Wiesbaden-Erbenheim. It is the first supermarket with a rooftop greenhouse in Europe and it combines retail with a basil farm and fish farm. "Since 2009, we have already built over 200 Green Buildings in Germany. The new store with integrated rooftop farm is the logical next step for us," says Peter Maly, Divisional Director REWE Group and responsible for REWE stores in Germany. 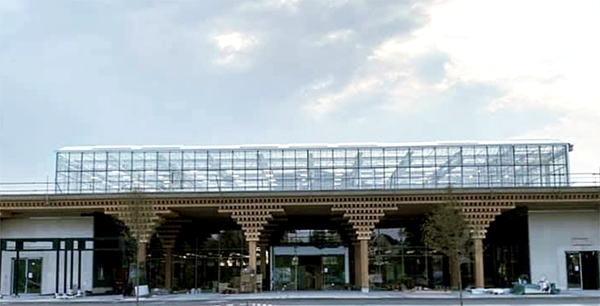 Supermarket and production facility
"The Green Farming store is not just a supermarket, but also a production facility in the middle of the city. On the rooftop farm, which is operated by our partner ECF Farmsystems, 800,000 basil plants grow each year using aquaponics, which receive excrement from the fish that we breed on site as fertilizer. No pesticides are used in the process," shows Jürgen Scheider, Chairman of the Management Board REWE Region Mitte. Rewe is Germany's second-largest supermarket chain.

"Our vision is to provide people with sustainably produced food. That's why I'm pleased to be able to help realize the dream of a self-producing supermarket here in Wiesbaden," adds Nicolas Leschke, founder and managing director of ECF Farmsystems. The company created a technique to couple aquaculture fish production with the hydroponic production of leafy greens. "Perch and basil are part of two resource saving cycles. The fish fertilize the basil plants with their excreta. These in turn clean the water from the fish tanks, which can then flow back to the perches. The use of this cycle system enables food production with 90 percent less water consumption compared to conventional agriculture, as the water is used twice." 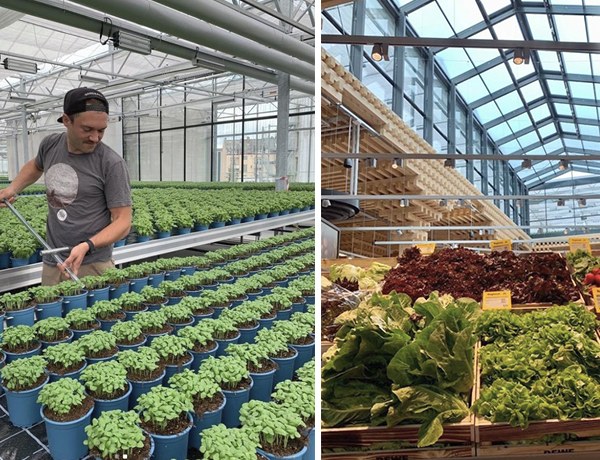 Basil supplied locally
The basil is already available at the opening and will also be delivered to 480 REWE stores in Hesse and parts of Rhineland-Palatinate. Around 14,000 pots of basil are packaged plastic-free on site every week and according to the REWE team, the sustainable packaging saves 12 tonnes of plastic per year.

At the same time, about 20,000 cichlids are bred in basins on about 230 square metres under sustainable conditions and processed on site. This produces about one tonne of fish meat per month. The fish is expected to be on sale by the end of 2021.

ECF Farmsystems uses LED lamps for their herb cultivation, supplied by Fluence. They've gained experience with these lamps in their urban farm ECF Farm Berlin, which they constructed earlier and currently operate and of which the products are also sold to Rewe. Their other projects include planning and construction of the rooftop farm ecco JÄGER in Bad Ragaz in Switzerland and the rooftop farm on the Ferme Abattoir in Belgium. 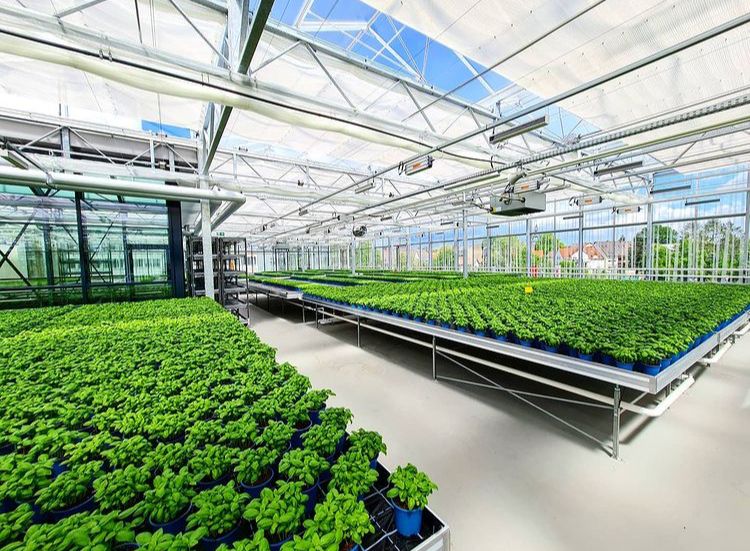 Wood is the core element of the supermarket: around 1,100 cubic metres of the renewable raw material were used here. "The indigenous coniferous wood stores more than 700 tonnes of CO2. In 30 years, the wood will have grown again and the CO2 balance will be balanced." Columns made of stacked wood form the supporting structure for the glass roof farm and form a vaulted structure that extends into the store. Inside, customers look out onto a glass atrium, the greenhouse on the roof. "A natural marketplace ambience with lots of daylight was created," Peter reveals.

A lot of daylight can be used through the glazed east and west facades and the atrium. In addition, intelligent cooling and heating technology, 100 percent green electricity and the use of rainwater for the roof farm, sanitary facilities and cleaning of the store ensure that resources are conserved.

Also the assortment focuses entirely on freshness with a large fruit and vegetable section including a salad bar, many regional and organic products as well as a glass butchery with a show kitchen and meat from animal welfare farms. In front of the store, local suppliers can offer their products in specially produced market stalls.

"The new REWE store in Erbenheim is a milestone in the development of modern supermarkets. I am very pleased and also a little proud that this special project has been realized in our region," says Jürgen Scheider, Chairman of the Management Board of REWE Region Mitte. "We are particularly proud of the wide range of products from over 100 regional and local suppliers."