"We will advance to larger-scale field tests in 2021 to be conducted under the recently announced collaborative Canadian field trials program with NexusBioAg, a division of Univar Solutions Inc", they say. Study results and applicability are patent-protected under MustGrow's existing suite of issued patents.

"Our crop protection technology has consistently demonstrated efficacious benefits similar to chemistry-based "synthetic chemical" products without the harmful safety profile often associated with some synthetic chemical products. The development of safe and effective biopesticides will be critical for future food security and environmentally sustainable agriculture," the MustGrow team says. 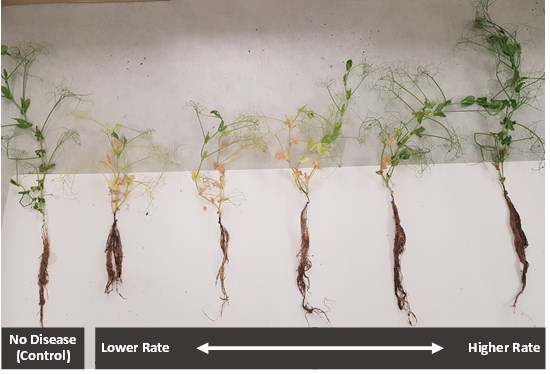 Greenhouse Soil Study Highlights
The control in greenhouse soil was recorded across a range of economic application rates. Initial soil samples were infested with Aphanomyces prior to applying MustGrow's mustard-derived TerraMG. The plants treated with TerraMG were increasingly robust - in plant and root system health - commensurate with application rate.

About Aphanomyces - Root-Rot Disease
Aphanomyces is a water mould pathogen responsible for root-rot disease, infecting a variety of peas, lentils and other legumes collectively referred to as pulse crops. The disease causes severe root damage and wilting, with yield losses ranging from 10% to 100% in infected fields

Canada is one of the world's largest producers (~9.2 million tons; 2019) and exporters of pulse crops. Industry experts conservatively estimate $20 million in annual pulse crop losses in Canada and $100 million globally caused by Aphanomyces.

The Province of Saskatchewan has been hit particularly hard, with 90% of fields showing Aphanomyces symptoms in 2019 (3). Current treatment measures cannot control Aphanomyces - they are only able to slow down the spread and reduce the incidence and severity of the disease. Further, there are currently no genetic cultivars available with complete Aphanomyces resistance (4).

Plant-Based Crop Protection for Plant-Based Protein
MustGrow feels it makes both logical and ecological sense to protect plant-based protein crops with plant-based crop protection inputs. MustGrow's product is a preplant soil treatment, meaning application to the soil occurs before crops are planted. Application of MustGrow's biopesticide returns organic plant material to the soil through this preplant treatment process as a potential alternative to using synthetic chemicals.