CKF, Inc. has added to its roster of independently assigned environmental labels by joining the How2Recycle program and will have the “Widely Recyclable” designation granted for its Earthcycle™ line of thermoformed moulded pulp trays and punnets for fresh produce.

How2Recycle is an on-pack labeling scheme administered by the Sustainable Packaging Coalition (SPC) with the goals of providing consistent, accurate information on how to properly recycle packaging and to cut down on “greenwashing.” The program has more than 330 brand owners and retailers representing more than 2,600 brands, along with more than 100 packaging producers/converters as members. 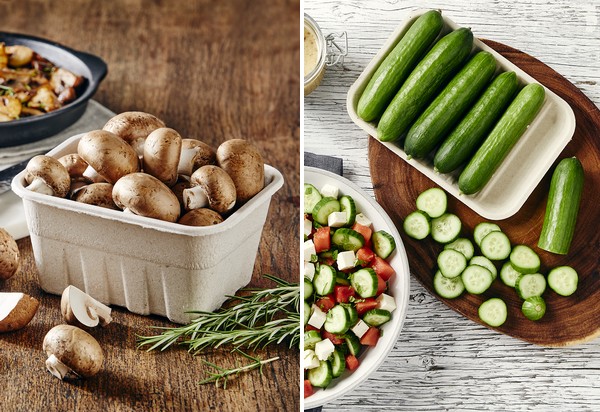 CKF, Inc. has been granted the “Widely Recyclable” designation for its Earthcycle line of thermoformed moulded pulp trays and punnets.

Greenwashing
"Greenwashing" is a term used to describe misleading environmental claims and was first popularized in a study done by Terrachoice in 2007 when it launched its now infamous “Seven Sins of Greenwashing”¹. The Sin of No Proof refers to “an environmental claim not substantiated by easily accessible supporting information or by a reliable third-party certification.”

“It is frustrating to witness terms like biodegradability, recyclability and compostability used without the appropriate independent verification or qualifications,” says Brad Dennis, vice-president of sales and marketing. “We consider all the independent environmental certifications, like OK Compost Home and FSC® (C145472), that we have achieved for Earthcycle as not only an investment in the brand but also an investment in the growth of a transparent and fair environmental packaging industry”.

Widely recyclable in Canada and US
In the How2Recycle program, CKF’s packaging is designated Widely Recyclable in both Canada and the US when clean and dry. The assessment process by the How2Recycle team is thorough and specifies that packaging is only recyclable if there is a “substantial likelihood” it can be collected, sorted, reprocessed and reused in manufacturing or in creating another item in “majority of communities”².

“CKF appreciates the work of the SPC in devising and administering the on-pack recycling label as it will help drive innovation in sustainable packaging design and promote responsible environmental marketing,” says Dennis.

Earthcycle has an extensive product line of top seal punnets for soft fruit, tomatoes, grapes and mushrooms along with industry standard trays used with flow wrap and over-wrap applications. Earthcycle packaging is OK Compost Home certified, certified home compostable by the Australasian Bioplastics Association (ABA), is product level FSC® (C145472) certified and now is acknowledged as being Widely Recyclable in the US and Canada by the How2Recycle program.