2021 has begun in a tumultuous fashion – the good news of a Brexit deal set against a fresh lockdown, and more national restrictions due to soaring levels of coronavirus infections. How is consumer confidence in the economy faring, and how might that impact the shopping behaviours of British consumers of meat and dairy produce?

The emergence of Covid as a major issue in the UK in March 2020 saw consumer confidence fall to the lowest levels seen since austerity in the early 2010’s. We have then seen a steady recovery through 2020 until December. In December came a series of further blows as the pandemic situation worsened, the extension of tier 4 restrictions and for many, changes to Christmas plans. The looming prospect of a no deal from Brussels also contributed to the sense of gloom. Notably since the deal was announced there has been a slight recovery in consumer confidence but it remains subdued. In addition, according to IGD 32% of consumers expect to be worse off in the year ahead, compared to only 17% who expect to be better off. 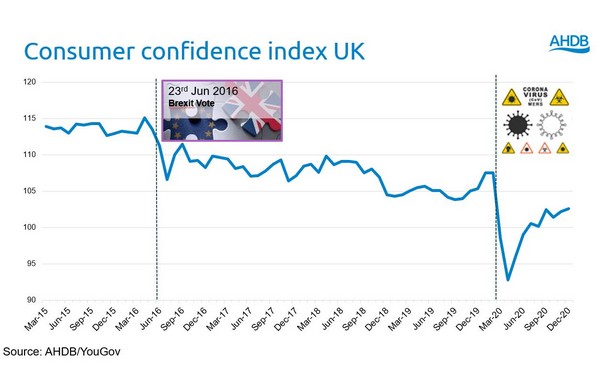 According to our YouGov tracker (AHDB/YouGov Nov 2020) 1 in 3 Brits have experienced some change in employment status since the beginning of the pandemic in March 2020, with 11% having been furloughed, 12% on reduced hours and 7% made redundant.

The economic insecurity faced by many has resulted in a change in consumer priorities, as 48% say in the last month they are now more price conscious, or have changed how they allocate their household budgets. Of these, more people are also buying products on promotion (61%) and are trading down – either by buying own label instead of branded (55%) or buying value ranges (43%). Almost half (47%) say they have started shopping in cheaper stores.

It is the youngest consumers who have become more price conscious – 49% of 16-44’s compared to 39% of over 45s – highlighting the unequal economic impact of the pandemic. Younger consumers are normally more price conscious than older but have become even more so over the course of the pandemic. Whilst habitual office workers have tended to save money due to taking fewer holidays, saving on commuting costs and eating at home more, the savings have been much less for those who could not previously afford to take holidays or eat out very often. It is that group who have been most likely to see their income fall via furlough or redundancy.

According to YouGov, the cost of food has become the biggest consideration for shoppers at this point (65%), ahead of preparation time (59%) and health (58%).

In conclusion, we expect economic pressures to deepen in the first half of 2021 and many shoppers to become more price conscious.