Carrying out two or three production cycles per year is common for cucumber growers, but tomato and pepper growers usually opt for a longer cycle. Yet in the new system created by the Spanish company NGS, this is possible as well. The Intensive Vertical Recirculating Hydroponic System places the plants over the other, up to three rows high. "This system incorporates up to 6 tomato plants per m2, three times more plants than those grown in a conventional system. Since the cultivation cycle will not last more than 4 or 5 months, growers can carry out between 2 and 3 cycles a year, doubling their production," says Donald Gartland with NGS. 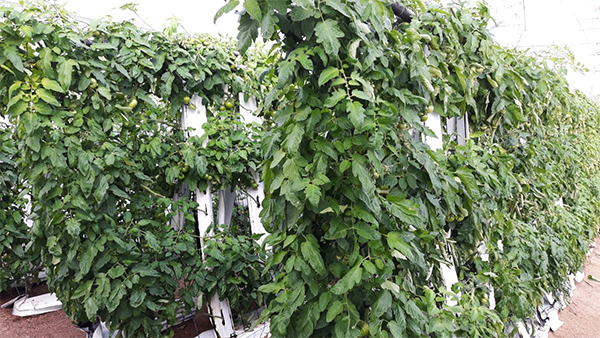 Profitability
"This new hydroponic system was created by our agronomist Antonio Oliva in order to develop a tomato and pepper production system that improves the profitability of greenhouses," Donald Gartland with NGS says and explains how the company is committed to bring innovation to growers focusing on varieties with high added value, fewer labor needs and producing on dates when there's a high demand for the product.

With their new Intensive Vertical Recirculating Hydroponic System for tomato and pepper cultivation, they higher the profitability by working with shorter production cycles. "Having short cycles means that all production can be concentrated in 4 or 5 weeks, thus drastically reducing the harvesting labor," Donald says, estimating that the labor demand can be reduced up to 40% compared to the conventional system. "It will no longer be necessary to periodically tread, strip and peel the plant for more than 9 months, nor will it be necessary to harvest every 2 or 3 days for much of this time." 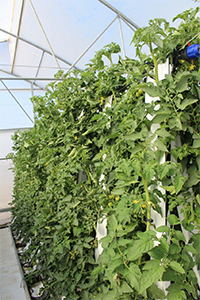 Intensive production model
This intensive production model obtains between 3 and 5 tomato trusses per plant and cycle, depending on the variety use, to give a total production per cycle that varies between 15 to 20 Kg / m2. "This system is characterized by incorporating up to 6 tomato plants per m2, three times more plants than those grown in a conventional system. Since the cultivation cycle will not last more than 4 or 5 months, it allows growers to carry out between 2 and 3 cycles a year," Donald says, explaining that since one plant is placed over the other and up to three rows high, the density is higher. "In a traditional system there are 20,000 plants per hectare and with this system it would be 60,000 per ha - resulting in over double production as traditional." Furthermore, since the production cycle is short, it is not necessary to use a grafted plant.

As the NGS system is recirculating, it offers the possibility of being able to save as much as possible on such important resources as water and fertilizers.

"This production model fits very well in tomato crops focusing on flavor or high quality, varieties that stand out in the market for their high concentration of Brix degrees or sugars, as the Raf, Kumato or Rosa tomato," says Donald. "Also since the NGS hydroponic system allows the concentration of salts to be raised to levels above 10 ds / m CE with ease, since no type of soil or substrate is used, obtaining a “Premium” product."