"The bylaw could be a win-win for everyone"

As Leamington’s recently enacted Greenhouse Light Abatement Bylaw comes into effect, the municipality is facing widespread criticism from the horticultural industry for seemingly pandering to the community while ignoring growers’ needs. The main point of contention is the bylaw’s requirement that ceiling curtains remain 100% closed from an hour before sunset until an hour after sunrise, with 10% gapping allowed between 2 a.m. and 6 a.m. Such stringent regulations are the first of their kind and with Leamington being the greenhouse capital of North America, the ramifications of the bylaw could be widespread.

Mauricio Manotas, president of Svensson’s Americas subsidiary, spoke with HortiDaily about the new bylaw and explained that while governments often consult with industry members when preparing such regulations, that wasn’t the case in Leamington.

“Industry leaders learned about the bylaw at the same time as everyone else. No one approached us beforehand, so we were as surprised as everyone else. Especially by the 100% blackout requirement,” explained Mauricio.

Energy saving
Svensson is a developer of greenhouse screening materials, including the energy screens widely used for light abatement purposes. The company was founded in 1887 as a textiles company and began producing energy-saving screens in the 1970s. Although headquartered in Sweden, the company has seven offices across the globe, including the American office where Mauricio is based. According to Mauricio, the company began installing energy screens in the Leamington area roughly 15 years ago and now installs screens over 100-150 ha in the region every year.

Even with all the oversight that comes with being the global leader in greenhouse energy screens, Svensson couldn’t predict such a restrictive bylaw.

“I believe that in Holland, growers can open screens between midnight and 5 a.m. to properly vent the greenhouse. We’ve never seen a regulation requiring more than 90% coverage at night. Even if growers can comply, there will be a lot of growing issues due to high heat and humidity,” says Mauricio.

“Before, growers would buy our screens for their own benefit and they were excited to do so. Now, it’s in response to this bylaw, so there is less excitement. We see the order, but not the excitement.” This comment aligns with others made by growers and the Ontario Greenhouse Vegetable Growers (OGVG), explaining that greenhouse growers are not against light abatement and have already purchased screens both to reduce light pollution and maximize light use efficiency.

“Used correctly, our climate screens are a tool for everyone. They maximize light use in the greenhouse, so they are good for the growers as well as the community. This could be a win-win for everyone but as the bylaw currently stands, that’s not the case,” explains Mauricio.

While Svensson offers a variety of screens for different uses, the company’s Obscura 9950 FR screen is best suited for light abatement as it blocks 99% of the light, provides energy savings of 50% and is fire-retardant. A version on this screen was first released 25 years ago in response to Holland’s light abatement regulation and has been improved upon over the years. 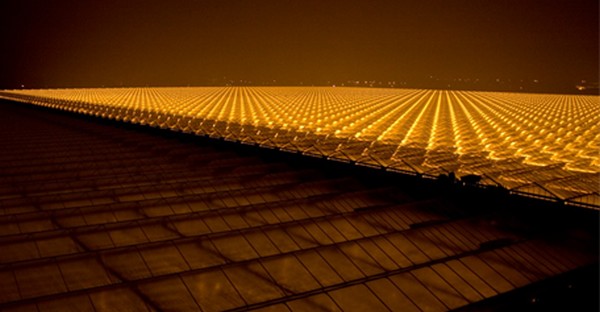