Experts say that an already challenging 2020 will end wetter than average for most regions. This will allow regions still suffering from water shortages to start to recover. However, rainfall events may cause disruption to farm operations.  Some regions might face warmer days, increasing crop water requirements. Key is to get on top of your irrigation early in the season before crop water requirements peak.

October to December is likely to be wetter than average for all vegetable growing regions (over 65% chance in most of the areas), except for western WA (Perth metropolitan, Manjimup, Pemberton, Geraldton, Carnarvon) which is likely to have an average rainfall in the last three months of 2020. 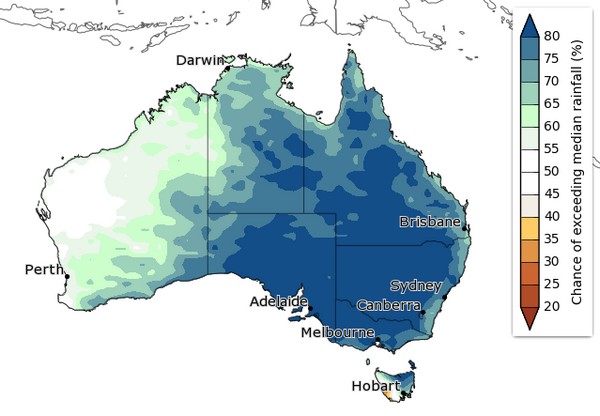 Temperature outlook
Days are likely to be warmer than average during October to December across the coastal regions of northern WA (from Perth to Kununurra), NT (Katherine, Darwin) and north Queensland (Ayr, Gumlu, Bowen), and the far southeast of Australia (from Werribee, Melbourne sandbelt, over Gippsland into Tasmania) (Figure 2). Cooler days are likely (60 to 75% chance) for much of southern WA (Manjimup, Pemberton), SA, NSW and central to southeast Queensland (Emerald, Bundaberg, Gympie, Toowoomba, Stanthorpe, Lockyer Valley).