"Water cooling improves the lifespan of the entire LED fixture"

Since the introduction of LED fixture 'Monarch' earlier this year, Oreon has been able to illuminate many projects with this high power 1000W LED grow light. This LED fixture has been specially designed to replace a 1000W HPS fixture in the greenhouse 1 on 1 (using the same cabling). More than six months later, Oreon can report that the Monarch is now the LED fixture with the highest possible light output thanks to improved LED chips. The Monarch achieves a light level of 3400 μMol/s, depending on the chosen spectrum, with ease. With a consumption of 1010W, this is equal to an efficiency of 3.4 μMol/J. Growers can now achieve even higher lighting levels with the same energy consumption: > 75% compared to an HPS lamp. Or average energy savings of more than 45% at the same lighting level.

It is increasingly common that growers are at their maximum power capacity, while they would like more light on their crop, without damaging it because it gets too hot in the greenhouse. The Dutch Powerhouse 'Monarch' offers the solution: more light, less heat, better quality and lower costs at the same energy consumption. 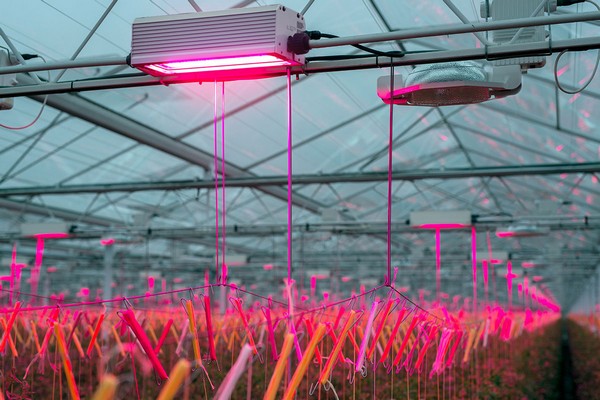 What makes it possible for Oreon to produce so much efficient light with a very small LED fixture? Water-cooling. Oreon uses an active cooling technology. The water flows through the fixture and immediately removes the released heat. This improves the lifespan of the individual LEDs, but also of the entire fixture. In addition, the temperature in the greenhouse remains stable, CO2 values are retained and the plants can be lit longer. The water cooling technology is a sustainable solution, which gives growers the opportunity to re-use this released energy. It is used, for example, to heat up other premises or the irrigation water of the plants.