In a successful return-to-space mission, research study results indicate that beneficial insect-killing nematodes (small round worms) can be used in the future for natural control of insect pests when humans are growing crops in space. The research objective was to study entomopathogenic (insect-killing) nematodes (EPNs) foraging and infection dynamics in space onboard the International Space Station (ISS) between December 2019 and January 2020.

These beneficial roundworms may have 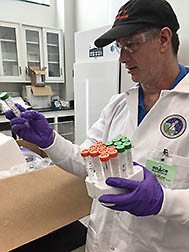 'what it takes' for controlling pest insects that threaten crops grown aboard during long-term human missions in space. That's the implication of findings from experiments conducted aboard the ISS and published in the journal npj Microgravity. EPNs are insect parasites used to naturally control insect pests that damage crops, that's why investigating the efficacy of EPNs in a unique environment like the one provided by the ISS (e.g. an apparent state of weightlessness) could help establish successful agriculture and plant protection in space.

Here on Earth, insects have great abilities for finding, eating and multiplying in their favorite plants and crops. Nowadays, with a very dynamic world travel scene and extensive commercial activities, it is even easier for insects to move around globally and wreak havoc on crops. Now there is concern that these pests could extend their abilities (and appetite!) to crops grown in space for long term travel or habitation.

"As we look into a future when crops will be grown in space, we expect that beneficial nematodes will offer one of a kind opportunities to establish agriculture for long-term space exploration." said Dr. David Shapiro-Ilan, ARS Supervisory Research Entomologist at the Southeastern Fruit and Tree Nut Research Station in Byron, Georgia and co-project director.

Another startling finding was that nematodes born on Earth returned showing no problems, but those born and developed in space (under weightlessness conditions) had a hard time (or died) upon return to Earth. It is suspected that they became stressed upon re-entry to Earth due to the pressure of being exposed to "normal" gravity. This may be an important issue for long-duration space flights of nematodes to destinations such as Mars. Nematodes may need to be transported in a different developmental stage to ensure they survive on their destination planet.

This EPNs space mission research was a collaborative effort led by Dr. Fatma Kaplan, CEO of Pheronym, award-winning ag-biotech pest management company that enables sustainable farming through its novel platform of nematode pheromones, the Center for the Advancement of Science in Space (manager of the International Space Station U.S. National Laboratory) and USDA-ARS (Agricultural Research Service) co-project director research leader Dr. David Shapiro-Ilan. The research was sponsored by the ISS National Lab, who partners with NASA to utilize the U.S. research allocation aboard the orbiting laboratory.