The world’s first virtual trade show for fresh produce, United Fresh LIVE!, concluded this past Friday, June 19 after a packed event week. More than 12,500 people registered for the event and more than 7,500 people were online at one time. General sessions, workshops, coffee talk round tables, morning fitness classes, networking receptions as well as the tradeshow reached thousands of participants. “You truly have made this one of the most special experiences of our produce careers,” said United Fresh Board Chairman Michael Muzyk and the organization’s President & CEO Tom Stenzel. 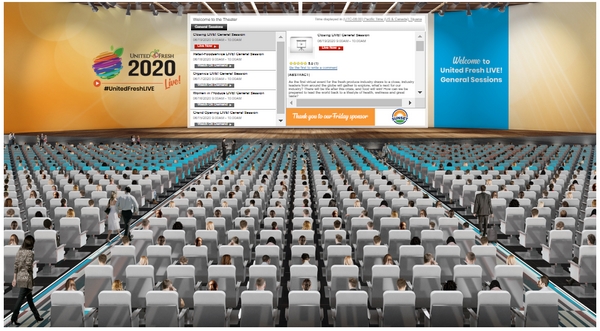 Another key element of the show is the expo floor, a virtual show floor this year. More than 200 companies exhibited with about 85 of them being new on the United Fresh show floor. It’s a relatively large share of new exhibitors, partly driven by the fact that besides the booth, no other costs were involved. Without costs like airfare, hotels and meals, the barrier to entry was relatively low.

Exhibiting companies were presented with valuable analytics. They were able to see who visited their booth, what attendees looked at in the booth and how long each attendee stayed around for. Many exhibitors shared that their company videos generated most interest. Some exhibitors were struggling with the digital format in the sense that it was hard to connect with buyers and build relationships.

Praise for the organization
However, exhibitors unanimously shared how impressed they were with United Fresh putting on a new event like this in such a short amount of time. “We applaud the United Fresh Association for their efforts in trying to recreate the trade show experience under unique circumstances,” said Danny Mucci, President of Sales & Marketing at Mucci Farms. “United Fresh Live was an interesting experience, from putting together a digital booth to meeting and greeting people virtually. It was nice to chat with a variety of attendees from all over the industry and we were happy to talk about our new products, packaging, and latest sustainability initiatives with them. The virtual expo has a chance to make a large impact on the industry, and we’re looking forward to see the role it plays going forward,” Mucci mentioned. 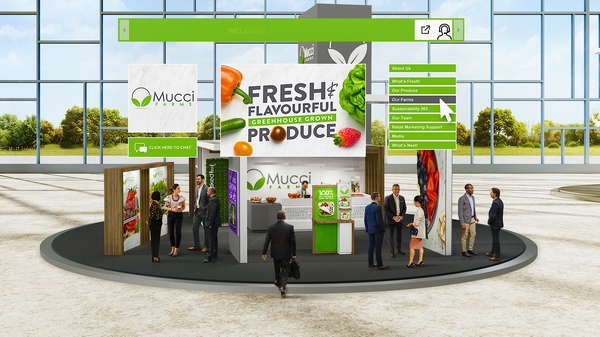 CarrieAnn Arias, VP of Marketing at Naturipe said the company had a successful show. “We had several announcements, including our new Vine Drops™, and the rebranding of our snack products, Naturipe Snacks™. These announcements brought lots of traffic to our booth and exciting conversations,” she said. “We also shared our environmental initiatives to the industry this week and our very own, Janis McIntosh, Director of Marketing Innovation and Sustainability, spoke at the Sustainable Packaging Coffee Talk session.”

British company RedPack Packaging Machinery still sees the need for improvements - both on the side of the organizers as well as on their side. "We have never done anything like this before, so it was a very different experience. Next time we will know better what to expect." While they did not get any active inquiries from people coming to their booth, they were able to connect with others by going to their booths. "It was a little difficult to 'catch' someone while they were on our page. We can still contact them afterwards but we were definitely missing the direct interaction - it was nothing like a proper exhibition where you can physically interact and show your product."

In the future they are hoping to see improvements for contacting visitors. They also plan on offering a more interactive feature outside of the exhibition space: "We want to improve our presence as well, making sure we're more proactive. We want to offer presentations on Zoom and specifically invite companies to come visit us. It's a learning curve for everyone involved."

Not everyone felt this positive about the platform. One exhibitor told FreshPlaza: "We had high hopes for this exhibition and the virtual format but we ended up being disappointed. There was very little traffic and it was difficult to engage with those that came to our booth." They were unsure if they would partake in a digital format in the future: "United Fresh tried something new and hopefully everyone learned from how it went. We are looking forward to novel ways to help engage exhibitors and visitors, otherwise there may not be a future for events like these."