An Agricultural Research Service (ARS) scientist in the Pacific Northwest has joined the hunt for the infamous Asian giant hornet (AGH) — a threat to honey bees in its native territory that could also endanger honey bees in the United States if it becomes established here. AGH is also a health concern for people with bee or wasp allergies. 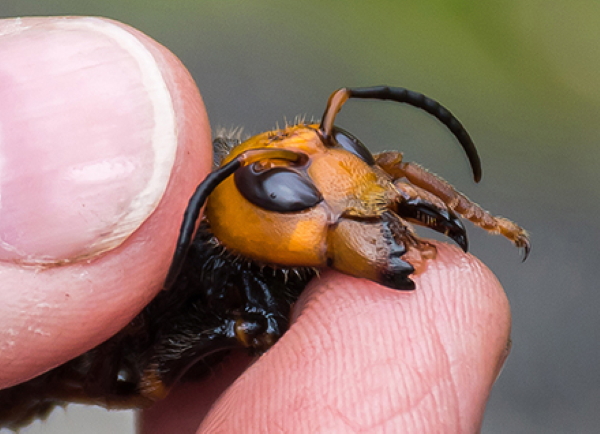 Jacqueline Serrano, an insect chemical ecologist with ARS’s Temperate Tree Fruit and Vegetable Research Unit in Wapato, WA, is investigating the AGH, dubbed the “Murder Hornet.” A few AGH specimens were discovered last year in Washington State and Vancouver Island, British Columbia. Despite its ominous nickname, AGH is more dangerous to insects than anything else.

At roughly 2 inches in length, this invasive species from Southeast Asia is the world’s largest hornet. It has distinctive markings: a large orange or yellow head and black-and-orange stripes across its body. While the hornet’s sting delivers a potent venom that can cause severe reactions—and in some cases, death—in some people who are allergic to bee stings, attacks against humans are rare. AGH earned its bad reputation from the way it hunts down honey bees and other insects, primarily during the late summer months when it seeks protein to feed its young. 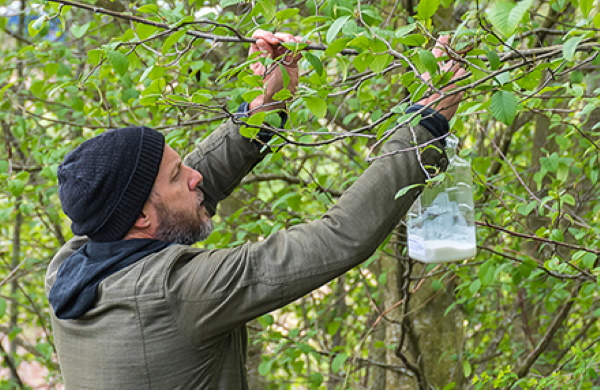 In the Pacific Northwest, honey bees play a significant role in the production of many fruit crops including apples, berries, pears, and cherries. “If AGH were to become established in Washington State, it could pose a serious threat to the beekeeping industry,” Serrano said. “AGH could subsequently impact the state’s billion-dollar agriculture industry.”

AGH sightings in the United States have been limited to two verified reports near Blaine, WA, in December 2019, and a single AGH specimen found and verified in May 2020 near Custer, WA.

Serrano moved to Wapato after working with the late ARS entomologist Peter Landolt, a world leader in chemical ecology research. She is carrying on Landolt’s work of developing traps used in Japan on a species like AGH by leading efforts to develop attractants for use as bait in AGH traps in Washington. 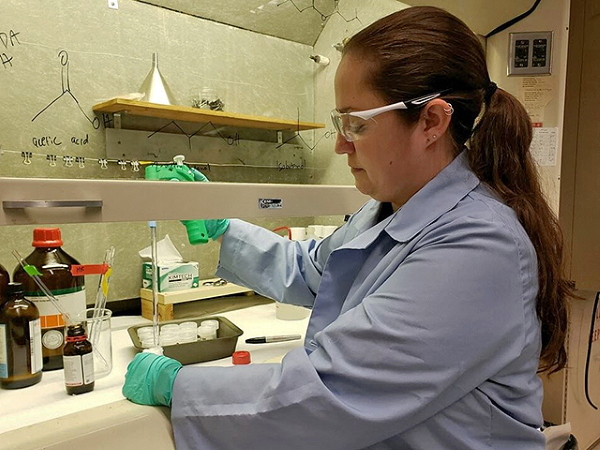 “There are many different aspects of AGH chemical ecology, including feeding attractants and pheromones, that can be used to develop attractive lures,” she said.

Should Serrano’s traps collect more specimens, ARS scientists will use those specimens to conduct genomic sequencing as part of the ARS Ag100Pest initiative. This initiative focuses on deciphering the genomes of 100 insect species that are most destructive to crops and livestock and are projected to have serious bioeconomic impacts to agriculture and the environment.

According to Kevin Hackett, ARS national program leader for crop production and protection, assembling the genome could help scientists fight the hornet in many ways. “It would help us find pheromones to better attract the hornet and also help us look for targets within the genome that we could attack with RNA to ‘turn off’ genes.” RNA, ribonucleic acid, carries instructions from DNA to control the synthesis of proteins.

ARS is working in concert with the Washington State Departments of Health and Agriculture, as well as USDA’s Animal and Plant Health Inspection Service, which is leading the Department’s efforts to ensure that AGH does not become established in the United States.