Even before the first harvest, this Brazilian greenhouse is already unique

Insiders already knew for some time that something was going on, but until this spring the greenhouse horticulture project Fonte Verde Agro in Andradas (Brazil) remained a secret. Now that the greenhouse of initially two hectares is almost finished and the first tomatoes will be harvested this autumn, Arjan Kouwenhoven, the Dutchman on site, shares the secret.

He talks about the run-up to the unique project (there are hardly any high-tech glass greenhouses in Brazil, let alone the total planned 12 hectares), the Dutch touch and the preliminary research into the local sales market, among other things. "It is certainly not so easy here, but the quality of the tomatoes on the shelves certainly offers opportunities."

Radio-relay network
"Do you hear me?" "Yes, now I do." "Oh no, not again." It is evident, Brazil is not around the corner, so "just” contacting the site that is about a four hours drive from Sao Paulo can be difficult. An internet outage and therefore no radio link mean that the planned interview will be postponed for a week, but then Arjan also has a nice, unusual story at the beginning of May. "When I was in Russia in the 1990s, I had to request a phone call two days in advance, so much has changed in that respect."

Arjan makes it clear that he did not end up in Brazil by chance. “I am a grower's son, I had a nursery with my brother in Wateringen, I completed the horticultural school and then I went to countries including the United States and Russia in the early 1990s to give advice on greenhouse horticulture projects, where they started working with revolutionary Dutch innovations such as growing on substrate and high-wire cultivation. The knowledge and skills were sometimes lacking, so I helped with that.”

Triggered
The ruble crisis forced Arjan back to the Netherlands in the mid-1990s, where he started working at Metazet, a horticultural supplier. The company's cultivation gutters were particularly popular, also internationally, and so, soon after an economic dip, Arjan was able to travel again.

“From the United States to China and from Canada to Australia, I've been everywhere. But never in Brazil, until 2011. I was able to join a group of growers who went to have a look and was immediately triggered by what I saw there. It is a large country with millions of people who of course also consume a lot of tomatoes. In Europe, you already saw that prices were coming under increasing pressure with all the high-tech greenhouses out there, so it is "easier" to earn money by cultivating in other markets. And that also has happened, but not yet in Brazil.”

First try
A first attempt in 2013, together with a number of partners from cultivation and technology, failed. The partnership was called Kastec and that did not immediately lead to a greenhouse in Brazil. "The Dutch were still hesitant, among other things about corruption, logistics problems and high import costs, while the Brazilians were not immediately enthusiastic, because they are very used to outdoor cultivation."

This is also reflected in the vegetable shelves in the local Brazilian supermarket, as Arjan noticed. “You have very nice vegetable shelves in the supermarkets with beautiful products, only the fruiting vegetables still lag behind in terms of quality. This is because 98% of the tomatoes, for example, still are from outdoor cultivation. There are some large growers with hundreds of hectares, but all outdoors. The varieties that they grow must therefore be able to be strong, and this is noticeably at the expense of quality, even putting the tomatoes in cold storage, as sometimes is done there, does not help.” 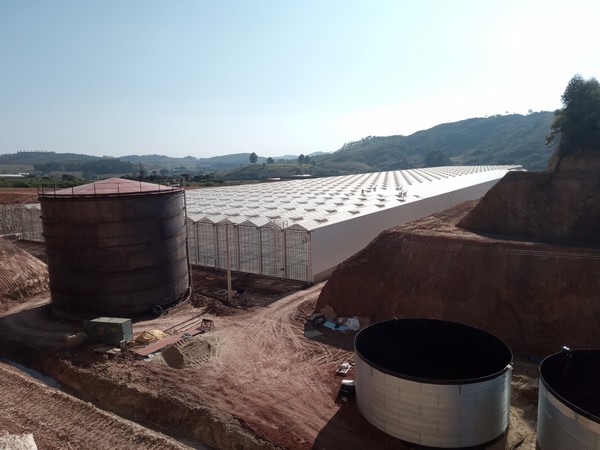 Of the 25 hectares of land, approximately 20 hectares are cultivated, of which 12 hectares are greenhouse and, among other things, water storage. "In view of the tropical rainstorms in Brazil, it is good to have some area available to collect the water."

Points list
All the while Brazil was still on Arjan's mind, he still worked "in technology" (in 2000 he set up FormFlex together with Metazet and two other partners, in 2011 both companies merged into Metazet FormFlex). With the sale of his shares in Metazet FormFlex in 2014, he had his hands free and decided to move to Brazil again.

“I have traveled all over the country with a points list in mind. For example the list included climate, logistics, availability of labour and distance from the sales market. Once in Andradas I was able to tick off all those points, only it 'failed' on one point ", Arjan chuckles.

“The acreage is not flat and that was actually also a condition. On the 25 hectares of land that my wife and I finally managed to buy in 2018, a difference in height of 28 meters had to be overcome, which meant moving 600,000 cubic meters of soil, with which we are now halfway (early May). Good enough to complete 2 hectares of greenhouse, with processing space, office and also water storage.” 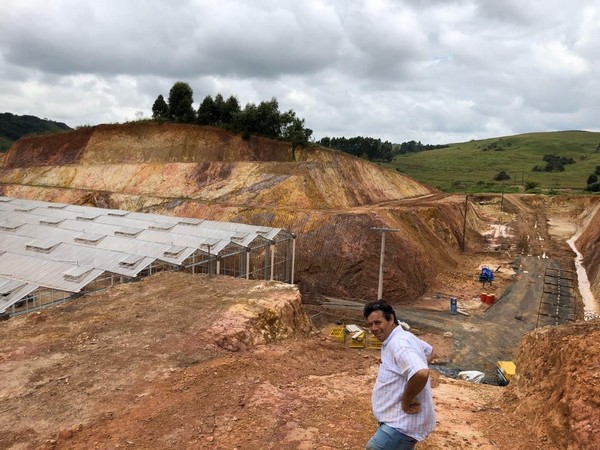 Arjan inspects the construction site. How much earth has been moved? Well, this much.

Opening doors
But back to the process, because you don't buy land just like that. “I also had a lot of contact with other Dutch growers abroad to inform myself as well as possible about the challenges and risks. We also had a lot of help from the mayor here, who came with me to the capital Brasilia to open 'doors' for me there.”

Levelling the ground started in mid-2018 and lasted a year. After that it was possible to build. “And that is going well. As it stands, we can sow in early June. We also do this ourselves in a 0.3 hectare greenhouse, and we expect to harvest around 1 October.” 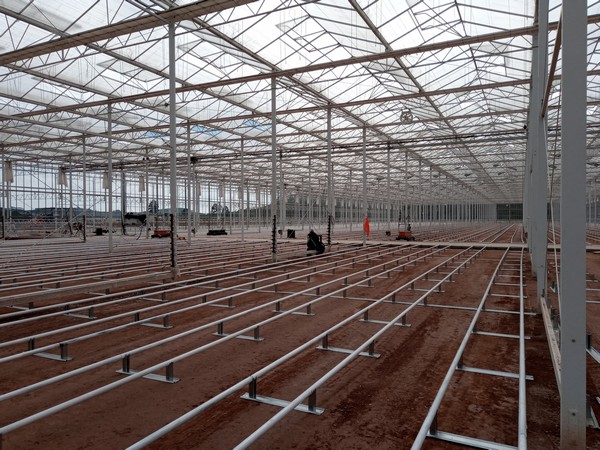 The greenhouse finishing works are not yet completed, but once inside you hardly see that you are in Brazil.

Photos of the building of the project, made by Agrikol, the Serbian company that was the contractor for the project Brasil.

"Big" and "small" at the same time
The last thing Arjan wants is to overreach himself. He mainly wants to do everything step by step and regularly emphasizes that it is ‘certainly not that easy’. “There are many years of preliminary research in this project and even once we start cultivating, we still have a lot to discover. It is exciting to see what the diseases and pests will do. That certainly is a challenge here, also for fellow (flower) growers around here. They grow in large plastic greenhouses of 2 to 10 hectares and, for example, have a lot of problems with thrips. The products for chemically combatting that pest hardly work here, if at all.

"We want to see whether, with a glass greenhouse with all the high-tech facilities available, we can cultivate with a biological balance, as is also done in the Netherlands. Should we succeed in growing in this way, we can serve as an example here and we will certainly share our process with the local growers.”

Middle class
Those vegetable growers are mainly Japanese, says Arjan. “There is a Japanese colony of sorts here, with many growers/farmers who grow fruiting vegetables with close ties to the breeding company Sakata. They grow in small plastic greenhouses of no more than a few thousand square meters and sell their product on wholesale markets, as I think is the case in 90% of the world. We will soon be 'large' compared to those growers with 2 hectares of greenhouse, but we are only small compared to fellow tomato growers with outdoor acreages of 400-500 hectares. Those larger growers, also from potatoes and corn, sometimes sell directly to retail.”

As in many other countries, retail in Brazil also wants to be able to count on a constant flow and a constant quality of fruit and vegetables. Arjan is convinced that growing in a high-tech greenhouse can contribute to this. "We focus on the growing middle class, the middle segment, which is also the largest part of the marketing pyramid." 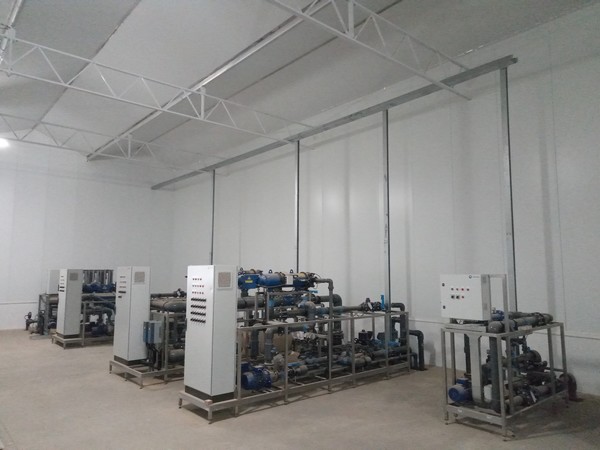 Everything looks spic and span, so let the tomatoes come.

Internet stimulates demand
To be established in the Brazilian vegetable sector, Fonte Verde Agro initially focuses on two tomato varieties with fruits around 100 grams that will be harvested separately and will also be put unpacked on the shelf. “We can pack on location if we have to, but a look at the shelf as it is now shows that there is hardly any packaged product. The reason for this is often that the product from Brazilian outdoor cultivation still lags behind all fancy packaging that is already there. Product quality and packaging do have to match.

"With our focus on the mid-range, we omit all ‘bells and whistles’ first. The Brazilian likes sweet, so the tomatoes on the shelf are also on the sweet side, although that is not the way we have it in the Netherlands. Almost all are loose tomatoes too. You hardly see vine tomatoes, also because the turnover rate is so low that it does not benefit the quality.”

Salsa dance
Yet Brazil is also not blind to the developments that are taking place in the tomato sector across the globe. In addition to the United States, the focus is also mainly on Europe. “Almost everyone today has internet and that stimulates the demand for 'better'. People are aware of whatever is available.”

It is nevertheless important not to go too fast. “You don't all of a sudden want to put a radically different product on the shelf, so we first just go for it, although we have provided a corner in the greenhouse with some experiments with specialties to surprise the consumer in due course. We can also take a look at TOV at some point, but first we like to harvest. When that happens, we will celebrate with a little salsa dance”, Arjan concludes.