In January 2020, about 85% of a red sweet pepper (Capsicum annuum) crop in a greenhouse located in Ragusa province (Sicily, Italy) showed virus-like symptoms. Symptoms consisted of a slight mosaic and discoloration of young leaves, vein clearing on young leaves, browning of the stem with strong necrosis located in the intersection of the secondary branches, partial necrosis of the vegetative apex and marbling, mosaic and distortion of the fruits (Fig. 1). It is important to note that in 2019 the same greenhouse was cultivated with tomato, which had been removed due to extensive infection caused by Tomato brown rugose fruit virus (Panno et al., 2019a). 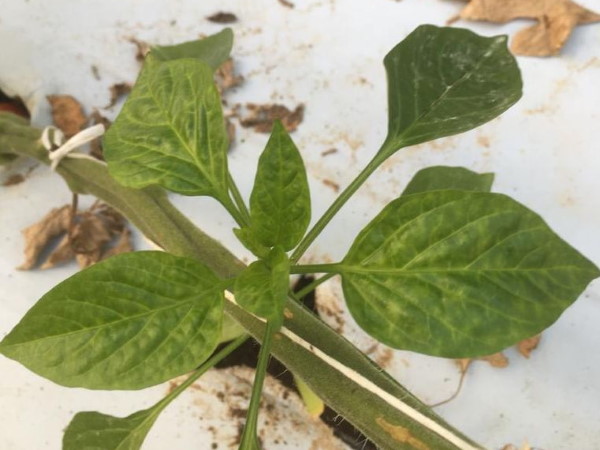 Thirty plants (15 diseased and 15 asymptomatic) were collected for subsequent analysis. In order to ascertain the causal agent of the disease, the samples were tested for the presence of Cucumber mosaic virus (CMV) and Tomato spotted wilt virus (TSWV) by RT-PCR (Panno et al., 2012), and for Tomato brown rugose fruit virus (ToBRFV) by immunocapture (IC) real time RT-PCR (Panno et al., 2019b). The results were negative for CMV and TSWV in all 30 samples while 18 samples (15 diseased and three asymptomatic) gave a positive signal in IC-real time RT-PCR. To confirm the presence of ToBRFV, RT-PCR with specific primers ToBRFV-F and ToBRFV-R (Alkowni et al., 2019) was done. Amplicons of the expected size, 560 bp, were obtained for the 15 diseased plants, while only one asymptomatic plant gave positive results. Four amplicons (three diseased and one asymptomatic plant) were purified using the UltraClean PCR Clean-Up kit (Mo-Bio, USA) and directly sequenced in both directions using an ABI PRISM 3100 DNA sequence analyser (Applied Biosystems, USA). The sequences obtained from the four samples had c. 99% identity and one sequence was deposited in GenBank (GenBank Accession No. MT188668). BLAST analysis showed 99.6% identity with a Sicilian isolate of ToBRFV (ToB-SIC01/19; MN167466) (Panno et al., 2019b).

To examine symptom development in pepper, sap extracts of each of the four positive samples were mechanically inoculated into three sweet pepper plants. Plants were grown in sterilised soil in an insect-proof glasshouse, with a 14 hr light photoperiod, and a target air temperature of 28/20°C day/night. Symptoms were recorded weekly. All inoculated plants developed the previously described symptoms, 45 days post inoculation. The systemic presence of ToBRFV was confirmed by RT-PCR.

Tomato and pepper crops represent about 70% of the market for fresh vegetable products in Sicily. Consequently, eradication measures are underway in this region, to try to contain the outbreak of ToBRFV. To our knowledge, this is the first report of Tomato brown rugose fruit virus on pepper in Italy and in Europe.