a Wageningen UR update on the status of LED in horticulture

“A lot is possible, but there is a lot left to learn as well!”

The global acreage of illuminated greenhouses has increased over the last 20 years. Starting at 1,000 hectares at the time, now over 3,000 hectares of about 10,000 in the Netherlands in total is illuminated. Where the installed wattage used to be 15 W/m2, in 2016 that grew to be over 70 W/m2. These numbers were presented by Anja Dieleman, specialised in greenhouse horticulture at Wageningen University and Research. She explains how the energy consumption is now 15 times what it was 20 years ago. "Looking at climate targets, it’s clear something has to change. SON-T lighting is still most commonly used, but more and more people are interested in a good application of LED lights. Temperature can be a problem with SON-T. Venting gets rid of the heat, but you also emit CO2." 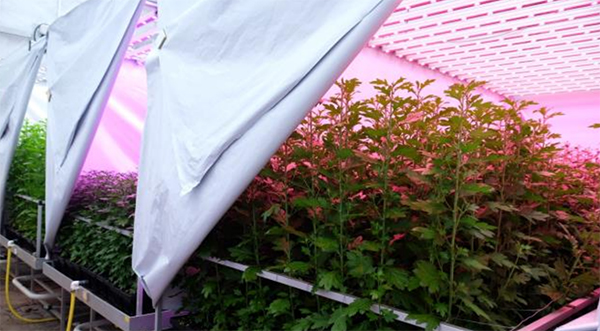 Testing the spectrum in the IDC-LED

Pro's and cons
The benefits of LED lighting are clear to most horticultural specialists. LED lighting has a high efficiency. It provides about 3.1 micromoles per joule of energy, for SON-T it’s 1.9. LEDs also emit less heat. Another advantage is that LEDs are very fast to switch on and off, so a grower can respond to changing weather conditions faster. Also you can make pretty much every desired light colour with LEDs. It is important to include white light, otherwise people will not be able to work in the greenhouse.

Then there's the challenges. "It’s great that LEDs come in all sorts of colours, but we’ll have to learn how to handle them. The general terms and conditions of cultivation have to be met. First, the crop's production has to be good (preferably even better, of course). The product quality has to be good, and last but not least, plant health has to be good and natural enemies have to be able to function. It’s important to understand the underlying physiological processes in the plant", Anja says.

“Our greenhouse is a system. When you change one factor in a system, it’s important not to overlook the other climate factors, temperature, CO2, and humidity. They have to be reset to match the new lighting in the system. The plants assimilate balance changes as well. You’ll have to alter the watering, too.”

Spectrum research
If one thing is learned during the years, it is that there isn’t just one perfect spectrum for a crop. "Multiple spectra are possible and we have to expand our knowledge about that. It’s important to include breeders and propagators as well. All these different people and companies have to be included in a talk about a development program and a search for the perfect lighting strategy."

There have already been a lot of trials in different crops. Ever since 2007, Wageningen UR has conducted research in tomatoes. “The first conclusion? You can grow tomatoes just fine under red and blue LEDs. You have to heat a little more, but the production is just the same as when they grow under SON-Ts.” Then the rose trial came along. “Growing roses under LED lights is quite the challenge.” A number of plant features were different and undesired. This led to a series of spectrum trials in roses. “It’s important that we gain more knowledge about light spectra, before we can start cultivating plants under LEDs at a larger scale.”

In cucumbers, the various cultivation factors have to be well-adjusted to each other. They did find a spectrum that works well, which was 5 percent blue light, 9 percent green and white, 75 percent red and 11 far-red. In the eggplant trials, treatments that included far-red light flowered earlier, and produced more.

Future of lighting
So with everything that is being learned on lighting, also new questions pop up. "With the acreage and intensity of greenhouse lighting being on the rise, there's new balances to be found", Anja says. "Most important of course is the use of light in the production. Then there's the use of white light to have favorable labour conditions and make it possible to scout properly in the greenhouse. In the future also dynamic light spectra will become a reality to get a perfect spectrum during the day and during the cultivation phase. And as a final point, also the effects on the biological crop protection will become more clear."

For now Anja is clear when it comes to making decisions on lighting investments: there's no such thing as 'the ideal spectrum' for all crops or varieties, so choosing the right spectrum for your specific circumstances is very important and so is being informed about it by suppliers and growers. "Installing a lighting system will affect your whole crop - so it's not a light decision to make."

For more information:
Wageningen UR