"We adapted our blueberry packaging machine for sustainable packaging"

The Spanish company Induser, based in the province of Almería, is launching its new packaging machine Blue 3R Pack, which is suitable to work with all types of plastic packaging, as well as with every model of 100% recyclable paper or cardboard packaging.

For the design of the new machine, Induser has participated in various R&D projects together with packaging manufacturers, whereby the packaging has been adapted to the machine and the machine to the packaging; a fundamental working method in automation. The list of packaging formats that can already be processed on the new Blue 3R Pack includes the 125-250 gram cardboard cup, the 125-250 gram cardboard shaker, the 500 gram bucket, the cardboard clamshell in different sizes, the tray with separate lid and the cardboard top seal in various sizes.

"One of the advantages of Induser technology is the adaptability to work with different types of packaging. The importance of this cannot be underestimated at a time when the consumer pays great attention to sustainability," says Pedro Martínez Lázaro.

The main goal continues to be achieving full automation. The following automatic systems have been built into the packaging machine:

"All of this is integrated into a concept already known for its high weighting accuracy thanks to the incorporated associative weighing, now with a new panel software with much more intuitive technology to facilitate handling to the end user," said Pedro Martínez. 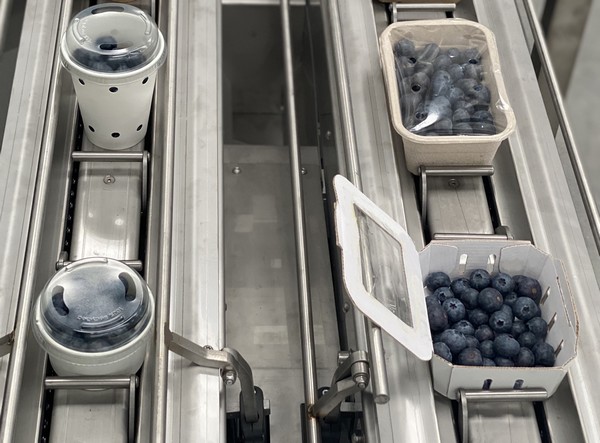 Another innovation that is already being implemented in Induser solutions is the full and complete communication between the peripherals, weight control, labeler and metal detector also manufactured by Induser, "which ensures that the full line has the versatility and speed required by the multiformat. The remote connection via a smartphone or tablet has also been improved in its new version, which is compatible with Iphone, Ipad or Samsung."

On March 30 and April 1, it will be possible to see the latest from Induser at the Global Berry Congress in Rotterdam, an essential event for professionals in the European berry sector.